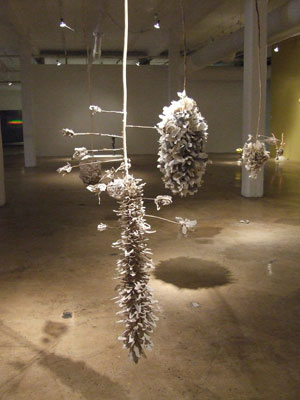 New technologies and the Internet, as well as improved ceramics education and scholarship, have pushed ceramic artists beyond the familiar landscape of vessels and decorative ware, changing the way ceramics are perceived and inspiring new ideas and methods. The Familiar Unknown at Blue Star Contemporary Art Center seeks to reveal the range and depth of contemporary ceramics. Curated by Ovidio Giberga, head of the ceramics program at UTSA, the exhibition showcases four female artists whose work references “global politics, economics, culture and the everyday human experience.”

Suspended from the ceiling and resembling hive-like alien pods, Rebecca Hutchinson‘s ephemeral forms are made on site with found materials, including 900 handmade paper “blooms,” fibers, wood, wallpaper paste and unfired clay. The hanging forms deteriorate over time and only last for the run of a show – contradicting the notion that ceramics are supposed to last for centuries.  And rather than the bright colors of many ceramics, she uses a minimal palette of washed-out earth tones. The smell of the damp clay and rotting organic materials along with the cracking of the clay make it appear that the work is alive, though whether dying or birthing, it’s hard to tell. The arrangement of the forms determines the traffic patterns of viewers, compelling them to walk through the Site Bloom, making them feel a part of Hutchinson’s evolving ecosystem. 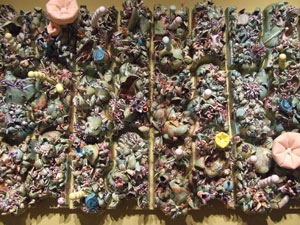 Susan Beiner takes a baroque approach to genetic engineering with her large wall piece, Synthetic Reality. It’s made up of hundreds of porcelain flower and plant varieties commingled in ways not found in nature. Measuring 28 feet by 9 feet, this is only a part of a much larger wall installation partly inspired by France’s Louis XV, who filled his palace and gardens with realistic, glazed porcelain flowers produced in a royal factory. The daughter of a chemist, Beiner has long been fascinated by plant hybridization. Combining parts of succulents with perennials and other plants, she creates panels that are beautiful yet unnatural, as if the artist is trying to re-create the plants from partial memories or inaccurate scientific records. Lurking beneath the glazed and gleaming surfaces of her eye-popping creation is the fear that manmade hybrids could someday replace the real thing with inferior copies. 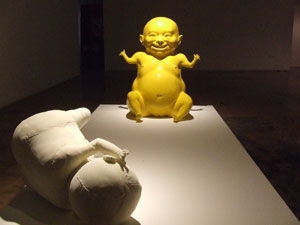 In her grotesque caricatures partly inspired by French porcelains, Anne Drew Potter stages humorous, but rather grim tableaus of human foibles. Southern folklore merges with the political cartoons of Honore Daumier in The Judgement of Br-er Rabbit. Three roly-poly, white, wig-wearing, laughing judges point accusing fingers at the cowering black rabbit-conjuring all the kangaroo trials conducted to protect Jim Crow in the Old South. In Big Baby, a hefty yellow infant, possibly a crass representation of China, laughs uproariously at a fallen playmate, perhaps the financially ailing U.S. Meanwhile, Miss Moppet and Brother John toys with sexual stereotypes and taboos.  There’s a suggestion of childish meanness and cruelty in Potter’s installations, or maybe it’s just reflecting harsh adult realities of the worlds we have created. 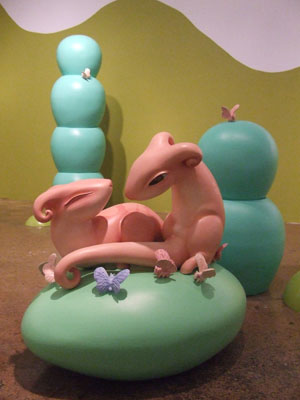 In contrast, Rebekah Bogard‘s happily ambisexual animals shimmer with cartoon bliss in a brightly colored garden of delights. With their floppy ears and vaguely phallic tails, her fantasy creatures resemble mutated, armorless armadillos. Curved and streamlined, the playful animal figurines frolic innocently in an idealistic and romantic environment unencumbered by restrictions related to gender, race and sexual orientation. While influenced by illustrations for children’s fairy tales, Bogard’s animals are intended to invert stereotypes so that these cute, cuddly animals can be surprisingly strong and assertive. Although the animals are fantasy creatures of indeterminate sex, Bogard used romance novel covers as models for posing these swooning creatures as pure expressions of love and happiness.

Clay may be forever bound to its 30,000-year-old vessel tradition, but the artists exploring The Familiar Unknown show that the world’s most malleable three-dimensional medium remains open to fresh, new directions.

“Reclaimed: Paintings from the Collection of Jacques Goudstikker” at the McNay