Disclaimer: Swallows actually have extremely keen eye sight, and if anything are hyperopic. 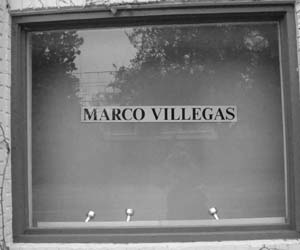 You are probably wondering where I have been, as it has been
weeks and weeks since I last corresponded with you.  My actual whereabouts are
complicated, but I will say this – two weeks ago I appeared at Marco Villegas
show, Without the Birds, Without the Breeze
on view at Meredith Long and Company (January 7 – January 30,) 2010, and a week
ago I was seen at Robert Pruitt’s exhibition, The Forever People, on view at Hooks Epstein, Gallery Inc. (January 16 – February
13, 2010). On display
in both exhibits are some exceptionally nice works, in Robert’s case pastel
drawings on brown paper, and in Marco’s, paintings and collage. 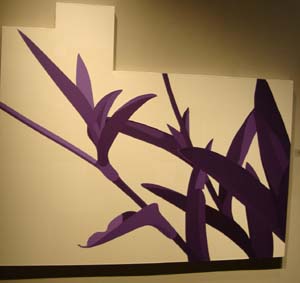 Although usually shy, Marco was eager to tell me about the
curious impetus that led him to create his new work, which consist primarily of
paintings and collages of birds overlaid with painter’s tape and paint
swatches, along with a few other works depicting both paint swatches sans ὄρνις, and a purple plant that looks
suspiciously like a Wandering Jew (Tradescantia pallida).

I sat down with Marco at the intersection of 27th
and 610, right around where the new bike trail peters out, and asked him to
fill me in on the development of his new work.  I apologize for any inconsistencies in my transcript as the
sound of the traffic on the adjacent freeway pretty much blocked out everything
he said.

Here is the background story: 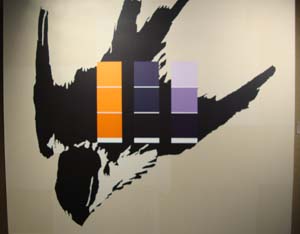 In March of 2007, Kraft Foods Global Inc. was hit by an
unworldly infestation of house swallows (passer domesticus ) at its Houston plant location. Although an especially elegant and
beautiful bird, “the flying
mouse”, as it is known by its detractors, can completely decimate a vat of Scooby
Doo style Kraft Macaroni and Cheese in just
under a picosecond.  As one can imagine, CEO Irene Rosenfield and other
executives at the company were distressed. Said a tearful Rosenfield, at the
time of the infestation, “We wouldn’t have minded so much if the product
consumed had been, say the Jello No-Bake , but when you take out Scooby Doo , an important American icon and staple, that is hitting below the belt. Speaking on behalf of myself and
Regional Director Norville “Shaggy” Rodgers, this menace must be stopped
immediately. 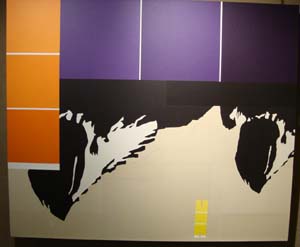 Alerted that the company was considering a variety of both
traditional and radical approaches to eradication (rat poison, toxic
foodstuffs, hawks, 700 Club episodes, a guest appearance on the Jersey Shore ), in rushed the world’s leading ornithologist, W.E.
Oddie with what might be the perfect non-violent solution to the problem

According to “Bill” Oddie, out of all the birds, house
swallows are the most susceptible to visual suggestion.  Why not, he suggested, find some image
that will gently dissuade the birds to quit macking down on the most patriotic
of starchy foods?  Oddie was very
persuasive, convincing Kraft, that not only would they avoid fiduciary
catastrophe, they would also dodge a major p.r. disaster, the murder of 1000’s
of innocent birds. 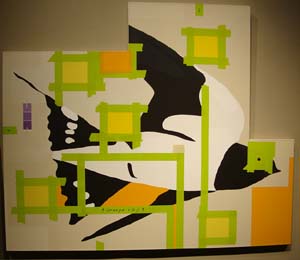 This is where Marco Villegas steps in.  “Somehow Oddie had gotten word that I
was a regular Pere Borrell de Caso when it comes to painting devices of
restraint.  Believe me, it was a
hit or miss procedure trying to figure out a final solution.  I tried everything – paintings of
manacles, gaping mouth cats, a double door folding pigeon trap # 502, birds
trapped in tape, everything,
Nothing was working and time was of the essence, as by this time the
birds had plowed their way through the Pokemon s, Rugrats , and Flintstones varieties of our nation’s sweetheart food. The people at Kraft were getting
impatient and standing with vasos and
bombards at the ready. I was under the most extreme pressure
of my life, knowing we were only days away from a total Easy Cheesy apocalypse if you will.

Just as I was ready to throw in the towel, I discovered a
little known fact about swallows.
Despite the fact that they are the most visually susceptible of all
birds, they are also extremely myopic.
I started looking at the birds in the Kraft vats, as they devoured the
last of the Flintstone Macs, and I
noticed that on occasion some of the birds would share a pair of reading
glasses among groups in order to verify the substance they were eating was
dried pasta, and not cardboard packaging.
This discovery led me incorporate into my paintings brilliantly colored
trompe l’oei paint chips, which in effect lured the birds in to get a closer
look. Once close enough, they
would see their imaginary counterparts entrapped in equally imaginary tape,
squawk loudly in fear, then flee or rather fly for their lives. Thanks to this chance discovery,
excessive weight gain of millions of Americans will be ensured for generations
to come.”

Who said there
were no more heroes?

If some people are stuck with research essay accomplishing, thence I will recommend to buy essay papers from some professional custom media essays service in such case.

By the way, the above is a direct quote from King George III