Hell and High Water: Bolivar After Ike from Kelly Klaasmeyer on Vimeo.

Five months after Hurricane Ike slammed into the Texas coast on September 13, 2008, Houston artist Bert Long drove through the Bolivar Peninsula, the area hardest hit by the storm. Long was stunned by what he saw; the damage was apocalyptic and recovery had barely begun. Over the next eight months, Long photographed the devastation.

On the one-year anniversary of the storm, four Bolivar residents recounted their experiences for the audio track that accompanies Long’s images. Glasstire is grateful to them for their kindness and candor and we wish them good things for the new year.

In order of speaking:

Joyce Kennedy
Retired from a Houston energy company, Kennedy is the mother of two children and grandmother of four grandchildren. She first built her house in Crystal Beach in 1960. Only the pilings of her home were left after Hurricane Ike. Kennedy is currently living in a fifth wheel trailer on her lot while she rebuilds her home.

George Strong
A retired political consultant and lobbyist, Strong lives in Crystal Beach with his two dogs, Wilson, a 130-pound Rhodesian Ridgeback, and Tramp, a border collie. He has rebuilt his home. 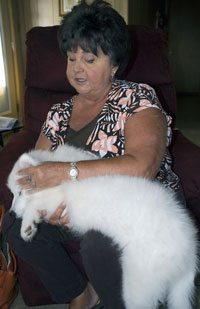 Brenda Cannon Henley
An award-winning investigative reporter and editor, Henley retired from The Examiner in Beaumont, Texas in 2008. Currently a freelance writer and editor, Henley founded BolivarBLUE, a Yahoo Internet Group site for residents to reconnect and share information after the storm. She and her husband lost their home to Hurricane Ike. They are currently leasing a house in Crystal Beach while they "wait for their lawsuit against the Texas Windstorm Insurance Association to work its way through the court system." Henley is the mother of three children and has seven grandchildren.

Marsha Scott
Owner of Marsha’s Takeout Junction restaurant from 1983-1997, Scott opened Touch of Fitness, a day spa and health club on the Bolivar Peninsula in 1997. She lost her business in Hurricane Ike. Her home was severely damaged and she is still working to rebuild it. Scott has two children and three grandchildren. She currently lives in La Marque.

Bert L. Long, Jr. was born and raised in Houston’s Fifth Ward. He won
the Prix de Rome in 1990 and was recently named Artist of the Year by Texas Accountants & Lawyers for the Arts. In 2008, Long installed his epic painting ART/Life,
a commission by the City of Houston for the Looscan Neighborhood
Library. The artist is currently at work on a multimedia project about
the devastation of the Bolivar Peninsula. Long’s work is the subject of
an upcoming book by Thomas McEvilley.

Kelly Klaasmeyer is the Editor of Glasstire.