Disclaimer:  This story, like any large sculpture, is fabricated. 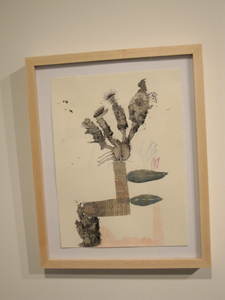 Last week I went to Art
League Houston to see Brent Kollock’s Obsession of the Essential, as well as Natural Recyclers and Wasted Resolve, two installations by Divya Murthy and
Nicola Parente.  I guess you could
say that I didn’t really go there, because – if the truth be told – I work at
the Art League Houston.

I have worked at ALH my entire life.  People here know me at the “Partnership Coordinator”, but the title I aspire to is Her Majesty’s Envoy Extraordinary and
Minister Plenipotentiary, which I am told I may not have as it does not fit on
a standard business card.  My job
as “Partnership Coordinator” is rewarding, as I especially love  coordinating partnerships.  One of my fondest
partnership management success stories was convincing Siegfried and Roy to go
with tigers, as seahorses can’t survive out of water.  Not every partnership formed under my guidance has boded
well though.  For example, one of the
biggest mistakes I ever made was introducing God to Yayo; life was a comparable
paradise before the two met, and now look where we are. 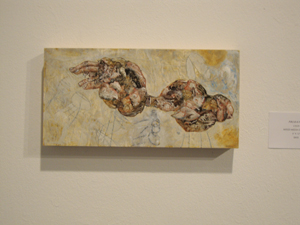 When asked, “What is the Art
League?” all employees must respond in half-truths, as upon hire, we take a
sacred vow never to reveal the organization’s true purpose.  We answer with the regular spiel – we
are a gallery, we are a school, we have outreach programs for seriously ill
and disabled adults, we worked in elementary and middle schools, we neuter
dogs.  Our true purport is more
like that of the Justice League. Yes, you read correctly, the Justice
League.  Like Aquaman, Wonder
Woman, and the Martian Manhunter, each employee at ALH is endowed with
superpowers, but of the arts administrative kind, and like the afore mentioned
Justice League members, each of us has a fatal flaw, a weakness if you will. 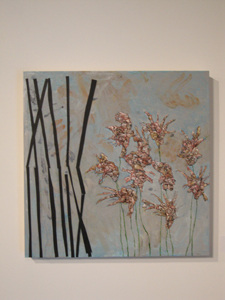 Take Sarah Schellenberg for
example.  The General Public knows
her as the Exhibitions Manager, whereas we in the Arts Administration Superhero
World know her simply as Captain Chaos or Comptroller of Conniption Fits.  As anyone who has ever worked in a
nonprofit knows “The Conniption Fit” is a regularly occurring phenomenon.  Anyone who comes within 15 feet of a
non-profit is likely to be overcome by this malady.  Fortunately for us, we have Sarah, who in her role as
Captain C. has the rare ability to emit a sort of nuclear ray that calms the
shuddering neurons of those afflicted.
(Her Achilles’ Heel is in the bowel, attacked on more than one occasion
by her arch enemy Week Old Broiled Chicken Left Out on Her Desk Man). 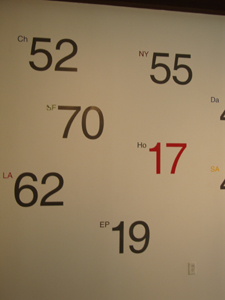 By the way, I have just been
informed that my job hangs in the balance if I further reveal the other super
identities of Art League staff.  In
lieu of that, I will tell you the story of the curse of the conniption fit, the
secret sorrow of many a nonprofit.

Marduk Ceramic Show, Inc. (a
subsidiary of Marduk of Babylon), the very first non-profit, was located in the
ancient Sumerian city-state of Ur, during the reign of Nabonidus (556-539
B.C.).  MCS had simple aims:

The mission of Marduk Ceramic Show,
Inc. is to show people ceramics in all its manifestations, so as to more
clearly identify the art form in order that the general public will no longer
mistake a potter’s work for the intestinal matter  of cows. 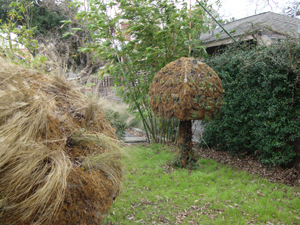 MCS had a small close-knit
staff – an Executive Director, an Office Manager, a Development Director, and a
Programs Manager; it also had an extremely active, productive Board.   The ceramists showing their work
at MCI were masters at their craft, and were easy to get along with as well.  The volunteers needed little direction,
and the visitors to MCS were highly satisfied with its programming, according
to exit polls. The neighbors, in particular the administration of the nearby
Ziggurat, loved having MCS in the area, as they understood the impact of the
arts on community.  All was well,
with the exception of the to be expected money worries, that is, until that fatal day in
the late spring of 551 B.C . 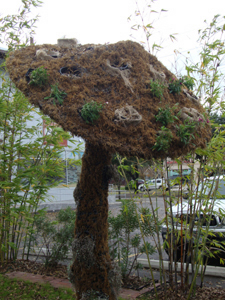 The morning of the day in
question started out at its usual pace.
A few people hollered down from the Ziggurat asking what time MCS
opened, the cost of memberships, and the like.  An out of work scribe wandered in, asking if there were any
job openings; a courtesan asked if she could use the phone, and was told it had
not been invented yet.

All was as it should be –
that is until who should step through the door, but Chaos, in the guise of two
extremely wealthy and powerful patrons bearing the names of Qingu Gates and
Tiamat Chromier.

Immortalized in the ancient
Sumerian text The Epic of Gilgamesh,
and considered by many to be gods, Qingu and Tiamat were not without their
problems. For example, the “in style” elective surgical procedure among the
glitterati was trephination and how much fun can having a two inch square bored in your head be? And then there
were the slaves, continually dying off from intestinal parasites and
tuberculosis; it was so hard to get good help those days.   But the worse of their problems
was the boredom.  They lacked
purpose in their lives, a profession if you will.  They talked about it often, and together came up with a
fabulous plan, and were now presenting it to the Executive Director of Marduk
Ceramic Show. 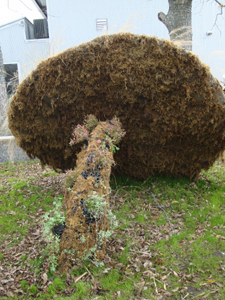 The plan conceivied by the noble pair was this– if
allowed to exhibit and sell their personal votive collections at MCS on a
regular basis, Quingu and Tiamat would guarantee that the nonprofit’s money
worries would vanish like so many investments in the night.

Seemingly to good to be true,
the director, a wise woman named Nanna Lugal, asked to see the votives before
making her decision. As the majority of these statuettes had been purchased at
charity auction, they were not up to the high standards of the gallery as she
suspected. (Nor was the couple’s cause helped by their insistence on wearing
mercaptan-emitting amulets around their necks, for that matter.)

In an act unprecedented in
the art world today, Lugal declined what seemed to be an answer to her
prayers, stating, “The artworks you proffer unfortunately do not represent the
mission of MCS, and would only further muddle the public’s understanding of
ceramics.   As it stands, we must
decline.”  Angered by
her response, Quingu and Tiamat conjured up the god Ziusudra, who sent forth a
great flood, which selectively limited its destructive powers to the nonprofit world, killing
almost everyone in it, except for the easily upset and excitable, who, as
chance would have it, were saved having previously constructed an ark for the
upcoming Marduk charity gala – which by the way was a complete disaster as
expenses far outweighed revenues, which in turn promptly caused the organization to
have its non-profit status revoked for ever and ever and ever.