Contemporary Korean Art at the MFAH 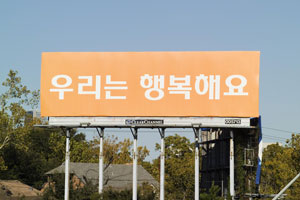 In late 2007, the Museum of Fine Arts, Houston opened its permanent Arts of Korea gallery, and immediately mounted an exhibition of the work of the modern master, Suh Se-ok. Now the museum continues its commitment to the art and culture of that ancient peninsular nation with Chaotic Harmony: Contemporary Korean Photography and Your Bright Future: 12 Contemporary Artists from Korea, two very different exhibitions with very different takes on Korea, art and artistic identity. Consider the titles; one asserts that something can be thought of as Korean photography, while the other posits a condition, or situation of being an artist from Korea.

Chaotic Harmony, organized by the MFAH and the Santa Barbara Museum of Art and curated by Anne Wilkes Tucker, occupies a gallery on the first floor of the Beck building and spills over into the long basement hallway that leads to the parking garage (this actually works better than it sounds). Forty photographers are represented, the majority by only a single photograph (both the exhibition’s strength and its weakness – it’s great to see so many pieces but it doesn’t give a very broad picture of the individual artists’ work.)

The show is arranged thematically into five categories: land and sea; urbanization and globalization; family, friends, and memory; identity: cultural and personal and anxiety. Such a schema seems unnecessary and is unconvincing; an attempt to impose coherence on a disparate group of work. Of greater interest is that these artists represent two different generations, born into two very different Koreas: those born in the 1950s and 1960s, into an agrarian Korea ruled by a series of military dictatorships, and those born in the 1970s, into a more urbanized Korea and who came of age in the nominally democratic Korea that has prevailed since 1987.

Dates of birth are not included in the wall labels, so you’d need to refer to the catalog biographies to be sure, but there are fairly obvious generational distinctions that can be discerned in the works presented. Many of the older artists seem to be concerned with something that might be called Korean-ness, as in Bae Bien-u ‘s Kyung ju (1985), an evocative black & white photo of a misty sacred pine grove near Gyeongiu, the ancient city of the Silla kingdom, which unified the majority of the Korean peninsula from 668 to 935 CE. Similarly, Kim Young-Sung’s untitled 2005 photograph from his Dolmen series is an opportunity for the museum to point out that over 60 percent of the world’s 80,000 dolmens (large stone tombs) are found in Korea. In his Snowland series, Byung-hun Min‘s spare framing of a line of foliage against a field of white hearkens back to ink painting traditions. (Bae was born in 1950, Min in 1955 and Kim in 1965.)

Ahn Sekwon (born 1968) and Yeondoo Jung (born 1969) sit on the generational cusp and begin to look outward from Korea. [A word about the artist’s names: some of the artists in Chaotic Harmony follow traditional Korean nomenclature, with the surname preceding the given name; some prefer the Western practice.] Ahn is represented by a triptych from his 2005-2007 series Seoul New Town, which documents the gradual destruction of a neighborhood of old-style, modest homes to make way for urban development. In the images, each shot from the same vantage point, a neon cross shines above a church against a changing and increasingly bleak and rubble-filled landscape. In Jung’s Bewitched series, people pose in the context of their actual job and then portray their ideal pursuit in a studio shot. A diptych from the series gives us a teenager mopping the floor of an ice cream shop in the first image; in the second the same teenager is transformed into an arctic explorer/hunter, her mop morphed into a lance. 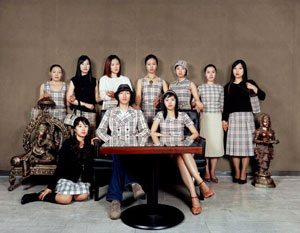 Sanggil Kim and Won Seoung Won are two intriguing standouts from the younger generation. Kim is interested in communities of choice, illustrated here by off-line_Burberry internet community (2005), a group portrait of ten young people who are united by their passion for Burberry plaid (perhaps unsurprisingly, there’s only one male). Meanwhile, inspired by the rampaging, territorial ids of her two young nieces, Won offers War of Sisters (2008). Set in a foreshortened landscape that could only be found in a fairy tale, the image is dominated by a multi-turreted pink castle. The sister of the castle, riding a carousel horse, marshals the animals of the forest to battle. The challenging sister commands a navy of whales, orcas and sharks, fleeted in a lagoon which sprouts a massive beanstalk. Bruno Bettelheim would be proud.

If the two generations of photographers represented in Chaotic Harmony move from an inward-looking examination of Korean-ness toward a larger engagement with the world outside Korea, the twelve artists of Your Bright Future are decidedly cosmopolitan. Co-organized with the Los Angeles County Museum of Art and curated here by Christine Starkman, it offers a more concentrated, but no less diverse, selection of artists from Korea. The two oldest artists represented were both born in 1957 (there is a collective in the exhibit whose individual birth dates are not provided in lieu of a collective "birth" date), but there is little evidence of any concern with Korean-ness; these artists are engaged with a larger world without completely leaving Korea behind.

The principals in Your Bright Future are Do Ho Suh (son of the aforementioned Suh Se-ok) and Bahc Yiso. Suh’s Fallen Star 1/5 (2008) is easily the tour de force of this exhibit. It’s a 1/5th scale replica of the historic register apartment building Suh resided in as a student at the Rhode Island School of Design. It’s split open on one side like a dollhouse. A traditional Korean house of the same scale, not unlike the one Suh grew up in, has crash landed into the other side of the apartment building, strewing debris. This clash of cultures (with an aspect of predestination – an agent took Suh to the same house his brother had lived in a few years prior) is played out with dumbfounding attention to detail. One does not find 1/5th scale furnishings just anywhere, so everything within the apartment building – every piece of furniture, every poster and painting on the walls, the stairways – has been meticulously fashioned by Suh and his assistants with hilarious fidelity. In one apartment, even the dinner in the oven has been cut in two to accommodate the dollhouse split. 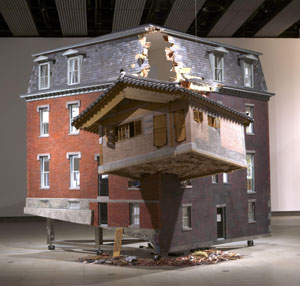 Bahc Yiso’s Your Bright Future (2002/2006), the exhibit’s title piece, consists of ten bright lights with reflectors, mounted on a rickety wooden structure that looks like it was thrown together minutes before you walked into the room. The lights shine up at the white wall, creating an almost blinding reflection. They have a simple anthropomorphism, like stick figures, as well as an expectant air. The fact that your bright future is a wall, coupled with the knowledge that Yiso died five years ago at about age 50, gives this seemingly jury-rigged installation a breath-taking poignancy.

Kimsooja and Kim Beom are two other standouts. In Kimsooja’s A Needle Woman videos (2005), the artist stands needle-straight on the street, back-to-camera, as the fabric of humanity flows around her in cities like Havana, Rio de Janeiro, San’a (Yemen) and N’Djamena (Chad). These are an extension of an earlier Needle Woman series, performed in cities like Tokyo, New York and London. In addition to the simple tension between Kimsooja’s stillness and the motion around her, there is the frisson of a lone woman in societies where a lone woman is an aberration; one gentleman in San’a, wearing a rather alarming dagger at his waist, appears particularly nonplussed. As for Kim Beom, all that has to be said about him and his Dadaist aesthetic is the name of one piece: An Iron in the Form of a Radio, A Kettle in the Form of an Iron, and A Radio in the Form of a Kettle (2002).

From the older artists in Chaotic Harmony to the younger artists in Your Bright Future, the overall sensibility moves from establishing a Korean identity to taking Korean-ness for granted, as a fact rather than something that needs identification. For most of the twentieth century, Korea was dominated by Japan. Its culture and language were suppressed and the country emerged from that domination at the end of the Second World War only to find itself cloven into two antipathetic states, technically still at war with each other today. The younger generation grew up through the South Korean economic resurgence of the late 1980s and 1990s and experienced the surge of national pride brought on by the 1988 Summer Olympics in Seoul. They could begin to look outward, could go overseas to the US, to England, to France and elsewhere for their education, exposing them to an international visual language.

For the younger generation, "identity" seems more about the personal. One of the final works in Your Bright Future is Minouk Lim ‘s two-channel video, The Wrong Question (2006). In it, an anonymous taxi driver, conveying the globetrotting international artist from the airport, expounds on how things were better under an authoritarian regime, equating progressive democracy with communism. Meanwhile, on an adjacent screen, the artist’s young daughter wishes Mommy would stay home more. Grandfather is heard urging his granddaughter to say that she, too, will be a painter like her mother.

"What’s a painter?" the girl asks.


"North Looks South" at the MFAH


"Making It New: The Art and Style of Sara and Gerald Murphy" at the DMA