DISCLAIMER: Neither the DHS, OIS, PMO nor any other agency or entities thereof, assumes any legal liability or responsibility for the accuracy, completeness, or usefulness of any information disclosed in this article. 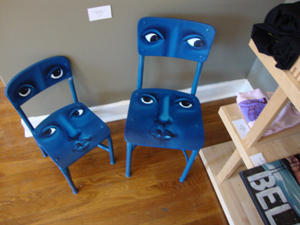 It was bound to happen. Word has gotten out that I hate everything and gallery owners have begun to protect themselves against my “satirical harangues” through pro-active measures.  Take Lori Betz of Betz Gallery for example.  She plays a no holds barred game and will resort to any means at her disposal when it comes to intercepting bloodthirsty critics, such as myself, if I were a critic, which I am not.

I had been told by others in the field that Lori was a tough cookie, and so weeks before I visited the gallery, I began to make ready to defend myself against any and all impediments thrown my way.  (Just as an aside, I would like to point out that the word “impediment” derives from the Latin root impediere, which literally means “to snare the feet”.  This does much in the way of explaining why people today still refer to a bare foot  as  “my little bunny".) 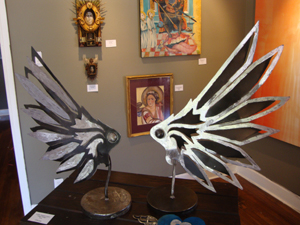 You are probably asking yourself, “How does Beth Secor prepare herself for battle against a wary gallerist?”  But don’t, especially if you are going to use the word gallerist.  It’s annoying and pretentious.  Instead, why don’t you worry about how you are going to pay your rent?  It’s a better use of your time, and if you were going to get a duodenal ulcer over a question, this would be the one.

As always, when preparing for a contre-attaque I spend the first several days conjuring up as many different scenarios as possible in which the opponent tries to deflect my nugatory remarks.  (Think of these ‘imaginings” as a kind of a Krav Maga or Kas Pin for the mind, if you will.  And if you reject my analogy, try musing on it from a subconscious level.)

Here are just two of the many hundreds of situations I fantasized about while getting ready for my trip to Betz Gallery:

Scenario One; I am in the gallery where I am forced to confront yet another hastily executed and unoriginal work of art by yet another delusional person.  I have forgotten my pen, and am confronted with the choice of jabbing myself until I strike blood, or asking the gallerist for a writing implement.  I chose the latter, which I immediately climb up to get a better view.  Upon descending, I ask the gallerist to borrow a pen, only to discover that said pen emits certain powerful magnetic rays that hypnotize me into thinking that any artwork I view is naught but a tiny baby kitten.   The kitten unfortunately is not potty trained, and I slip in urine on my way out the door. 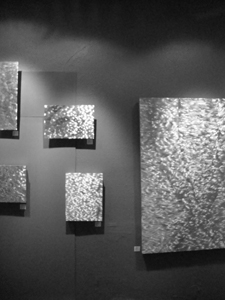 Scenario Two: Notified by the authorities that I am on my way to the gallery, Lori Betz immediately replaces herself with a Wii Fit avatar closely resembling the Lord Jesus Christ, as she has heard of my propensity for being both overtly sycophantic and gaseous in the presence of internationally recognized superstars. To worsen the end result, as it were, I have been force fed a diet of hard-boiled eggs and lentils for a week prior to my gallery visit.  Let’s just say, I won’t be going to heaven any time soon.

After wasting my time imagining these highly implausible scenarios, I quickly get down to business, physically arming myself to the teeth and/or nines with a mess of heavy assault weaponry including a 8mm Mauser, a Pulemyot M1910, a Kalashnikov AK-47, and a DShK , which I just as quickly discard having discovered that these items are not easily concealed upon one’s body unless one is morbidly obese, or has an insanely large rectal cavity. (Note to self.)  I also contemplate armoring myself in a combination Eura patch/ Nuva Ring/ H2 SUT/ Dogue de Bourdeaux/ Fisherman’s Friend/ fluoride treatment/ H1N1 vaccine/ Life Insurance Policy but can’t figure out which one to get/put in or on first, and have difficulty comprehending the waiver excluding benefits in event of my own death.

After days of similiar nonsense, I at last take a good look in the mirror, and after removing the condom from my mouth, say to myself, “Beth, Beth, Beth. You are being ridiculous. Lori Betz is just a person.  She is not some horrible monster.  She is just an artist trying to make her way in the world. What could she possibly do that would stop you from doing your job, a noble job, a job which has something to do with hurting people and making them cry?”

How wrong could I possibly be?  As wrong as a person can be without being right.  When I arrived at the gallery I immediately knew all was lost.  Faster than I could say Taumatawhakatangihangakoauauotamateapokaiwhenuakitanatahu, I was thrown from my horse, derailed from the track, usurped of my kingdom, etc., etc.  My weeks of inadequate groundwork melted before my eyes and I was rendered helpless like a boiling cauldron of oh so many deneutered Medusa headsnakes. Or something like that, only better written. 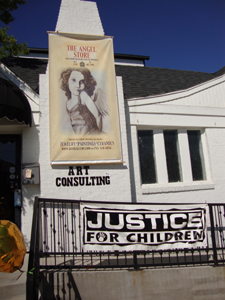 Lori, congratulations for you have felled the mighty oak.

Please, feel free to guess which one of these determining factors threw me off my game:

A.    The Betz Gallery “Angel Store” (October 17 – December 31, 2009), in which a portion of all proceeds go to a seriously worthwhile cause,  Justice for Children, a non-profit group that advocates for abused children. (Artists were asked to create work based on the concept of angels, specifically for the exhibition.  Betz Gallery often teams up with charitable organizations in order to support their good work.)

B.    The outside banner for the Angel Store, whose angel is a combination Les Miserables /Lolita, which is a little disturbing, considering.
C.    The Betz Gallery website, misspellings and all.

If you guessed A you are correct!

you use so many words but say so little

Neat trick, huh? You should try it.

Hey at least I get a picture of my work here again, no publicity its bad publicity,

I just can’t believe that the mighty oak was felled by a cooperative gallery.

yes, and it felled real good.