by Beth Secor September 20, 2009
FacebookTwitterEmail
DISCLAIMER: Not a review. Not the Truth. Not a word of it. 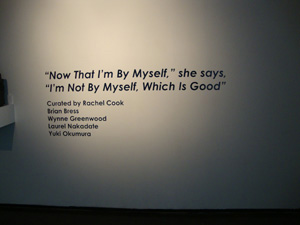 There is an exhibition of videos at DiverseWorks , entitled something like "Now that I am by myself,” she says, “I can eat in bed and don’t have to worry about the crumbs."  This exhibition is curated by Rachel Cook, and features the work of Brian Bress, Wynne Greenwood, Laurel Nakadate and Yuki Okumura (September 11 through October 24, 2009).

If one were to base my intellect solely in terms of my understanding and appreciation of video, then my brain would compare in size to the total weight of brains one would find in a rally of teabaggers – in other words, I’d be left standing with barely enough gray matter to fit through the eye of a needle . 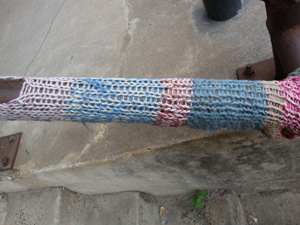 hmmm, why is this here?

One of my biggest frustrations about video is that you cannot pretend like you have paid attention to the work, like you can with other art forms.  For example, when I go to an opening of an artist who paints or sculpts or when I go on such a studio visit, I can merely glance at the work, and still convince the hapless sap I have given their creative efforts my full consideration.   Not so in the world of video.  First of all, videos comes in a box or they are in the shape of a f&&king cd, and ever single cd and box looks the same, so you can’t even get by with saying, “What made you chose a rectilinear shape as your format? ” or “I found it interesting that you decided to place the hole directly in the center of the circle” without the artist saying to themselves a day or two later, hey she did not watch my video.

Of course there are exceptions to the actually watch the video rule. Take for an example, a Wynne Greenwood video of a vagina that is included in the DiverseWorks show.  In this particular video I could have just as easily looked at the dvd itself, without ever inserting it into the dvd player, as said vagina also has a hole in the center and was very dvd like, in terms of its lack of animating qualities. At first I thought I would give the ‘ginie a few minutes, maybe it would move, maybe it would give birth or a man would walk up and stick something in it or someone would drive out of it with a Volkswagen, but no, it did nothing. 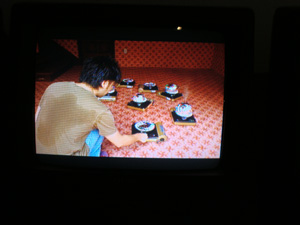 Not only, in most cases, do you have to watch the video to understand it, you also probably ought to watch the video in its entirety.  For those of us who have ADD, the difficulty of doing such a thing is increased ten-fold, if what we are watching is not fully compelling.  For example if a movie or video or doesn’t star Johnnie Depp, Jeremy Renner or Djimon Hounson, or it doesn’t include a squirrel, a dog playing Chopin, or a jackass engaging in hedge fund speculations, I cannot watch the entire thing.  While I was at DiverseWorks I was very nearly lulled into watching Young Woman Warrior Prepared for Battle by Wynne Greenwood and Nicole Eisenman, and Little Exorcism by Laurel Nakadate, in their entireties as both incorporated images of squirrels, but soon lost interest when I saw that the lead role, in both productions, was occupied by none other than Adam Sandler. 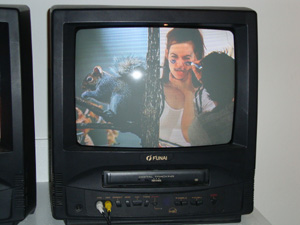 this is not day dream believer

My lack of understanding is frustrating to me and at times I wish there were a Kaplan School for people, such as myself, to attend. While there isn’t a video idiot school, it is possible that there is a time/space continuum portal that will allow you to infiltrate the confines of a video, if only for a couple of minutes.  I accidentally discovered this so caled portal while visiting "Now that I am by myself,” she says, “its so much easier to go without bathing for weeks at a time."
More or less in the center of the DiverseWorks main gallery is what appears to be an irregularly shaped stage, which I sat on in a fit of pique.  Within seconds of sitting down, my immediate surroundings disappeared and I found myself in Day Dream Believer, a video by Yuki Okumura, which was especially commissioned by DiverseWorks and Rachel Cook for the show.  This is what I want to know, what is it you really do Yuki, because when I was standing next to you in Japan in that video, there wasn’t a whole lot going on.  You ate a sushi roll, you placed a phone call, and you looked out a window twice, first on a light rail and then in a building.   Oh yes, and then you text messaged somebody.

But it was worth being there, because you text messaged a squirrel.

are you really whining about the fact you can’t be dismissive and lazy? The fact that you HAVE TO watch video and can’t just easily walk away and dismiss it would be a bonus in my book.

No, I am whining not because I am lazy, but because you perhaps did not notice where I disclaimed in the disclaimer that the whole article was a lie. I watch videos all the time. I am watching one of you right now.

Can you please explain the purpose of the article being a lie? I’m not getting the connection. Is this a performance piece by you? Are you making some statement about art criticism?

I am doing a lifetime performance piece that has to do with my love of squirrels. For example, this morning when I went on my walk, I mimicked the walk of a squirrel, which is not really a walk, but more of stutter.

Squirrels bounce like small balls when they are happy.
Explaining your stuff to the (very many) folks out there who donâ€™t get it â€¦.is most often â€˜futileâ€™ (See Borg)
I hate art that expects you to invest more time with it than it’s worth. I ‘m not lazy. I have a builti-n shit detector.

Is Christinielsen just a prop? Or what?

But I couldn’t read it all.

Several years ago I had a whole room 20 x 20 and some soft benches
and a great stereo and a fairly good projector–some folks sat in and watched
a whole hour of shorts of abstract animation/photography and original music.

Some folks came in and went fairly quickly muttering why is this “art”.

I must say if the work is the only thing there and you don’t have a bunch of other pieces
in the space there to call your ADD onward, you can settle down and enjoy.

I found beating the typical 3 seconds a piece of art typically gets was fairly rewarding,
though moviemakers do it all the time.

Sometimes I linger longer than I should at Target …just for the air-conditioning, (and for the smell of freshly popped pop-corn.) But I often wonder at the large numbers of homeless people ( I recognize them from the park) asleep in our public down-town library, propped up by stacks of books. My best guess as to why they are there is ‘no mosquitoes’ and of course, because the restrooms usually work and have paper. Maybe they feel safe.

Lots of squirrels in the park too!

I read it all. Eventually.