by Beth Secor August 30, 2009
FacebookTwitterEmail
DISCLAIMER!!!:  This is not a review, and in fact I did not know I wrote it. 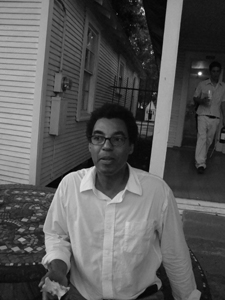 In 1993, shortly after Rick Lowe and some other people, who nobody seems to mention anymore, discovered the block and a half of abandoned homes in Houston’s Third Ward, those houses now commonly referred to as Project Row Houses, he had a dream.  And in the dream he was wearing a suit of gossamer and coriander petals , and perched precariously on the edge of his head was a hat made from a hummingbird wing. And when he awoke from the dream, he realized that what he had dreamt was intimately connected to the future of those 22 soon to be demolished buildings. But the other people, whose names we have forgotten, and who no one really seems to care about anymore, had other visions for the row houses, ones that were socially conscious and high minded, and if you were being completely honest, a little boring, but you would never admit it or else you would find yourself burning to a crisp, spinning around on a rotisserie spit from here until the 12th of Never.

And so Rick Lowe, always the good soldier, shut his mouth, and sat on his beautiful hummingbird hat, and did what ever the other people told him to do, knowing that some day some how, he would be able to realize his dream. 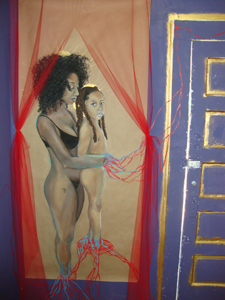 And over the years lives were changed.  Single mothers went back to college, aesthetically pleasing low income houses were built and occupied, and underprivileged children wove nwentoma on looms while discoursing on the paradoxical nature of entropy in respect to equilibrium and irreversibility in thermodynamic systems.
And as lives were changed, the world stood up and took notice.  And after they stood up, some of them sat down again, and in doing so, pulled out their checkbooks, and wrote fat checks.  And other people walked over to the kitchen counter and dialed 411 and said, “May I have a listing for Rick Lowe, Project Row Houses, Houston, Texas” and when they got him on the phone, they said, often in another language or another accent, “Will you please come and talk to us and tell us how you did it, how you changed a community and people’s lives?”  And Rick said yes, but before he left his home to give a speech or accept an award in another city or land, he would always look longingly at his beautiful hummingbird hat, which was kind of smushed flat by now, and he would pat his gossamer and coriander petal coat on the shoulder like it was a good friend who had just lost his cell phone right after he had shredded his address book, thinking he would never need it again. 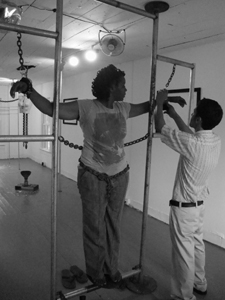 And then once, when Rick had flown abroad to give a speech, he had a life changing experience. “I was in Nepal.  And on my last day there, I was driving in the taxi to the airport, and on the way I see the worst sort of suffering you can imagine. Crippled people, people with leprosy, corpses laying in the street, and then the worst of all of them is this guy I bump into as I am boarding the plane. Not only is he flying economy class, but he has no carry on luggage, and he refuses to watch the in flight movie. What The Hell???!!!  That was when I threw up my hands and said, there is no helping people.  And at that very moment, I decided to follow my original dream, and make Project Row Houses what it was always intended to be—a reality television show centered around the fashion industry, which from here on out will be known as “Rick Lowe’s Project Run Way!”  Bravo Rick!  Bravo. 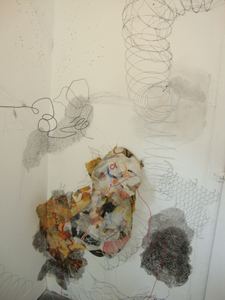 “Rick Lowe’s Project Run Way!”  is sure to bring in record viewing numbers, with its not to be missed contestants. A real scene-stealer is contestant Jonatan Lopez.  One of the funniest episodes this season is when Jonathan designs a dressmaker’s harness after dealing with one tweeking model too many.  “I understand the importance of speed and cocaine to the modeling industry, but pleeeeeeaaaze sister,” says Jonatan, his mouth full of pins. Another standout in the crowd is Michella Fanini who takes sans-cullottes to the extreme, with her Jacobin inspired collection. Says Lowe’s of Fanini’s chimerical creations, “They are great, and she told me she would be through with them as soon as I gave her a little bit more gold thread. She sure has used a lot of that stuff.”   The most controversial of the aspiring designers is Rosane Volcan O’Connor, who pronounces her name Hallelujah.  Praise the Lord, as she is known to her friends, combines high fashion and population control in a clothing line she likes to call I. U. D- licious!  “This line is in the prototype stage.  I just need to work on them a little bit, maybe make them a little smaller.”  After inserting one, I think you would agree with her: “Ow wow wow lady, smaller it is!”

What do you mean by “To look unlabored!”?

I guess I meant getting straight to the fact, where all embellishment falls away.

plus you spelled Jonatan Lopez wrong.

Well, I guess you better inform Jonatan, because that would mean he has been spelling his own name wrong for years.

what about the art? i did some studio visits with these artists and went to the see the final installations. this deep connection to community and audience was probably the strongest i’ve seen among a group of artists in a while. all were addressing their relation as artists to the community and how to activate the audience. some were hyper-aware. it wasn’t solely about them. maybe no other place in houston could’ve activated their sense of space in such a way. also this could speak to the state of cultural production, which has been ever shifting to carry the weight of the audience. i think these issues and other currents seem to capture me more than the biography of a founder…

My blog is not intended to be a critical analysis; it is meant to be absurd. The piece I wrote on Project Row Houses in no way, shape or form reflects my true feelings and respect I have for Rick, the work of Project Row Houses, and the artists involved in the show. I have known and been friends with Rick for at least 26 years. Before I wrote the piece, I wrote Rick and told him I was going to make fun of him, and his response was funny and light hearted, as I would expect it to be.

The city of Houston is all the better because of the work of Rick, iPRH’soriginal founders, and all the majority of all the people who are involved or have been involved in the organization since its inception. Both Fanini and Jonathan were students of mine, and Rosanne and I were in classes together at Glassell, and I am extremely proud to know them, and of their involvement in the community, and the work created during their residencies. I also know that all three each possess a great sense of humor. I chose to cast them in the roles as aspiring designers, because I knew they would take my joking in the spirit it was intended.

Truth be known, I was so bowled over by Fanini’s installation, I cried when I saw it.

p.s Jonatan Lopez has given me permission to use as many of the last six letters of the alphabet in the spelling of his name, in the hopes that it will boast his standings in Scrabble.

the typos are intentional in the last comment, as I wanted to give Sean something to do.

I am officially changing my name Yonaththththan Lopex, I love the article Beth