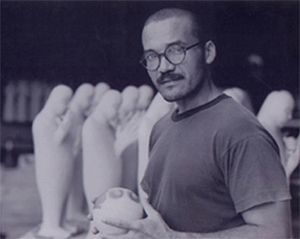 Last week I went to the Station Museum of Contemporary Art where I met the clumsiest man alive, Carlos Runcie-Tanaka.  This poor man breaks more plates than the Earth’s lithosphere, which doesn’t actually break plates, but shifts them, which is beside the point.

Before we talk about that, let’s discuss how utterly disappointed I was to find out that the Station is not actually a station, nor is it a museum of and about stations either.   When you visit the place, don’t expect to fill up your car with gas or transfer from one train to another or learn about why KUHF picked call letters that don’t even spell a word.

O.k., well that wasn’t really a discussion.  That is what I would call an argument.  That’s the last time I invite you to speak.

Like many museums in this current economic climate, the Station found itself a year or so ago hemorrhaging money left and right, and had to figure out new ways to bolster its standing financially. At first Director Jim Harithas tried renting the place out for children’s birthday parties , but soon realized this wasn’t a very good match at all.  Not only did the atmosphere affect the children, who often left at the end of the day with feelings of hopelessness and despair, but it also caused great anguish among their mothers, who tore at their hair and shirts, crying out “Who am I to think I could bring another being into this horrible, horrible world?” 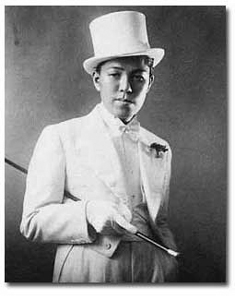 After several really great, but financially devastating ideas, including a two state solution, a basketball court/movie theater, and a museum for decorated cars, Harithas turned the fiduciary brainstorming over to his go to guys, Alan D. Schnitzer, Vice Chairman and chief legal officer for Travelers Insurance, and Japanese tap sensation Keiijiro Suzuki, aka Masahisa Segawa.  After smoking a bunch of cigarettes, Schnitzer and Suzuki jumped on their bikes, rode across town, jumped off their bikes, had difficulty breathing and held their chests, jumped on their bikes again, and rode back across town, momentarily forgetting the task at hand.

Luckily at that point, in walks or rather in trips Carlos Runcie-Tanaka, carrying an armload of plates.  Carlos Runcie-Tanaka has been described by some as the most unfortunate, albeit most talented ceramicist alive. Not only was he kidnapped by the Tupac Amaru Revolutionary Movement in 1996, and more recently subjected to open heart surgery, he is also a klutz beyond compare. Says the artist about his affliction, “I have two left feet.  I some how or the other break every thing I make.” 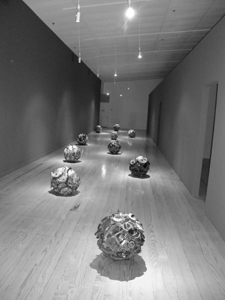 In an attempt to force his plates, bowels, saucers and cups back into their original shapes after breakage, Runcie-Tanaka began, in 1987, inserting neodymium magnets into the clay before placing the work in the kiln.   Because he fires the clay at such high temperatures (13,000,000,000,000 degrees Celsius) the neodymium magnets curve, causing the broken shards to reform into ball like shapes, rather than plates, bowls, etc.

When Runcie-Tanaka fell in the entryway of the Station, the shattered plates, as expected, reconfigured into an orb. Seeing this magical transformation, Schnitzer and Suzuki looked at one another and shouted out “Bocce Ball!” They have been laughing their way to the bank ever since.

Says Zach Moser, a recent Bocce convert, “You can’t be a  woose and play this game.  Oh yeah, and wear a pair of gloves.  I didn’t the first time and cut the hell out of my hands.” 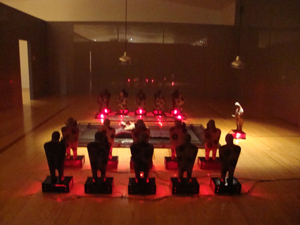 Beginning in September, those who are interested can sign up for the Station Bocce League, which will meet daily at 6 a.m. for prayer and practice.
Other leagues are forming at Butler/Borden Gallery (bocce balls courtesy Nestor Topchy and the collaborative team Ruck/Havel), Box 13 ArtSpace (equipment courtesy Kathy Kelley ), and Barbara Davis Gallery (Joseph Cornell and James Surls).

Just in case anyone was wondering, there was a tap dancer in Japan named Keijiro Suzuki who changed his name to Masahisa Segawa. I tried to find an image of Alan D. Schnitzer, the Vice President of Travelers Insurance but I could not find one.

you didn’t have to block me over asking about it.

Bravo Beth ! Great tale of two colliding worlds.
Thanks for sharing. And just in time ! They’ll see
me in September. I wonder if it’s BYOP (bring your own
Pastis ?!)

Loved, loved the pics, by the way !