DISCLAIMER! This is not a review, this is one part truth, two parts lie. 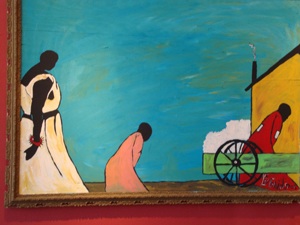 I lied, I saw the show

I live in the Heights. Redbud, G Gallery and Nauhaus Gallery are within walking distance, or they would be if it weren’t so damn hot.  In a car, even in a heavy, blinding rain, it takes me about six minutes to get to their adjacent locations on 11th Street.  In my helicopter, it takes a little longer.  I have to wait for the pilot to finish his coffee, go to the bathroom one last time, and then finally shoo the herons off the propellers.  In my tank it takes even longer.  I’ve never been able to see out its tiny window, so when I drive it, I have grown to expect the occasional head on collision, not to mention the numerous waves and stares. 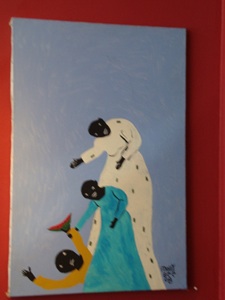 You should go see it, its good

At any rate Redbud, G. Gallery and Nauhaus Gallery are conveniently located, and one would surmise that I could easily visit them.  But what seems a simple task is often that which is the most impossible to accomplish.

When I was younger I attributed my inability to access these galleries to a curse Dan Allison once placed on me. One evening years ago I caught him burning a chicken on my front porch, and when I asked him what he was doing, he looked at his feet and said “Nothing.”  His actions seemed highly suspicious, but I am often confused about the smallest details, so maybe he was actually cooking a chicken, and maybe it wasn’t my front porch after all.

In the more recent past, I cannot truthfully tell you how many Mondays through Fridays (11 a.m. to 6 p.m) I have gone to Redbud Gallery and pressed my face against the windowpane, hoping Gus Kopriva would open the door and let me in.  But he never does.  And do you know why?  It is because his gallery, as well as those of his compatriots at Nauhaus and G, are only opened on Saturdays and Sundays from noon until five. 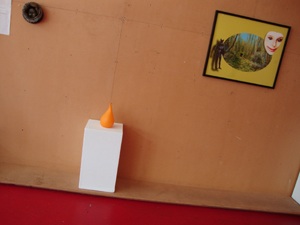 A week ago Saturday I again attempted to visit  “The Big Three,” as they are referred to in almost every city except Stalingrad and Detroit, where they are simply called “The Three.”  I really wanted to go see Leon and Molly Bee Collins: Recollections at Redbud, and although less familiar with the work, was also willing to see Major in Minor: Tomas Glass and Why Does It Still Smell Like Wet Paint in Here and Can I Sue If It Gets On My Clothes: Guus Kemp at Nauhaus, as well as Sea Shift at G Gallery.  I had just woken up and was still a little sleepy, so on my way to the galleries I stopped at the local Valero Corner Store ™ to purchase a large cup of its new Cibolo Mountain Coffee™ made from 100 percent pure Columbian Cocaine™.   One sip of this and let’s just say I felt good, but those feelings of excitement soon were so much excrement on my shoe.  Why would I say such a thing?  Because I had just stepped in shit; because my car wouldn’t start; because pouring a bad cup of coffee down the sink is not the same as snorting it up your nose. 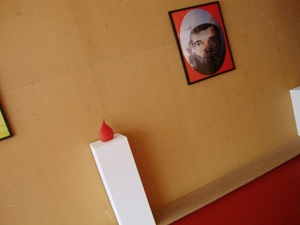 As I said my car wouldn’t start.  Triple AAA™ (AAAAAAAAA) sent out a coroner who pronounced my battery DOA.  I was heartbroken.   I loved that battery!  As I cried my eyes out, while extracting the lead and sulfuric acid from the carcass of my dear departed one, who should sidle up, but G Gallery owning LBJ hat wearing Wayne Gilbert™.  “Whatcha gonna do with that baby when you get through cremating it?  Can I have it?”   Surely I heard him wrong, for why would anybody want cremated remains? 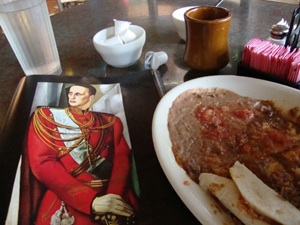 From Valero I traveled to the Firestone™ on Washington where I purchased a new battery and had it installed in my car.  While waiting, I watched Episode 73 of La Botte Brady, the one in which the family goes to Hawaii, and Bobby is cursed for refusing to return the ancient war god Kukailimoku to its rightful place, the hotel gift shop.  Just at the most exciting moment in the show – you know the one I am talking about – the very moment when Alice the housekeeper is murdered for reasons unknown in Kealakekua Bay, I was told that it was time to go.  I went outside, and there stood my car, shining proud like a newly minted penny, unwavering in her resolve to take me onward, onward, onward to our original destinations, Galleries Redbud, Nauhaus, and G.  As I got in the car, I said to myself,  Bethie™  (that’s what I call myself) I can feel it in my bones, today is the day.  Today I will gain access to these galleries.”

But then I said [email protected]#k it, I’m hungry and went to the Spanish Flower instead.

Again, the gallery shots work very well with the diner detail.
I believe “Bethie” has an eye !