“I Am Not So Different” at Art Palace 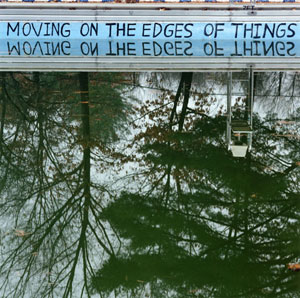 If you haven’t noticed yet, photography in Austin is alive and well. A triumvirate of Austin-based photographers — Anna Krachey, Jessica Mallios and Adam Schreiber — shines mightily next to work by three photographers from elsewhere in I Am Not So Different at Art Palace. With this tight exhibition, curator Rachel Cook has orchestrated a thoughtful conversation amongst the chosen works that strengthens each of them.

Too often, curators and spaces organize group exhibitions with a location-based rubric: “from here” or “not from here.” Alternatively, works are often smashed together by a narrow theme that forces a dialogue between disparate images. In Art Palace’s intimate Project Space, this exhibition tosses out these rules and the images seem instead to be dreamily chattering amongst themselves, laughing about some distant inside joke that the audience hungers to overhear. 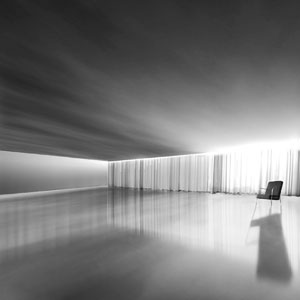 Los Angeles-based Augusta Wood’s large photo, moving on the edges of things (2005), immediately leaps out as both a star of the exhibition and as an anthem for the rest of the work. A solemn reflection is cast in a murky pool that seems to capture the essence of November in New England. Summer is gone, autumnal glory has passed and all that is left are dead leaves in the swimming hole. Carefully drafted capital letters trace out the work’s title on the faded cyan lip of the pool, leaving us longing for lost summer days (even as we sweat our way through the sweltering exhibition space!). Gazing at this melancholy scene, we imagine ourselves as a lonely extra, revisiting the set of Dirty Dancing long after our salad days have passed us by.

London- and Houston-based Duncan Ganley’s Katy Freeway’s Apartment, View #1 (2001)further develops this sense of contemplative wandering by leading the viewer into an imaginary, reclusive starlet’s abandoned apartment. Alone, our high heels echo throughout the emptied out living space. A single chair invites us to take a seat and wait, most likely for all of eternity. Ganley’s work has often focused on the temporal fantasy of stardom and the tension between the voyeur and the subject. Like many of his other images and videos, the viewer plays all of the parts at once: every role is equally satisfying and equally lonely.

The staged environment that Anna Krachey creates in her eerie photograph, Paisley (2008), is a similar scene of the sensual and the desolate— it feels like a Rorschach inkblot test for romantic perverts cruising local parks at midnight. A faded spotlight shines down upon what appears to be a colorful floral arrangement, but we just can’t be sure of what we’re seeing. Perhaps the remnants of a decomposing brides’ bouquet long after it’s been tossed? The mystery of the image is truly electrifying, yet equally repulsive. 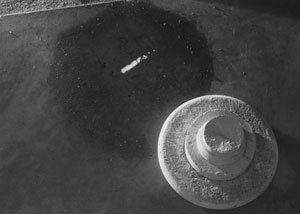 Jessica Mallios generally leaves her work untitled but I hear that my favorite image of hers has the informal name of “Moon Trace.” This “manufactured landscape” truly does feel like it was captured on the moon, or at least feels like an aerial view of a Smithson(ian) earthwork. A carefully stacked pile of rocks (or stale biscuits? Meringues? Cakes of soap?) looms large in the frame, sitting tenderly next to some sort of shadow and asteroid-like shape nearby. A lunar ocean laps in a distant corner; ultimately, we have no idea what we’re gazing at, but we want to eat it up, or perhaps descend upon it skipping.

The longer we spend with these spacious images, the more we long to play, to explore, to examine. There are many questions looming large in these fragile and tempestuous environments, chief among them: where the heck we’ve landed and how the heck we got there. This is not a show to breeze in and out of casually. Linger longingly and the images will reward you with a whisper in the ear and a pinch on the cheek.

Kate Watson is an independent curator, writer and artist based in Austin, Texas. She is a founding member of multimedia collective Austin Video Bee and the former Coordinator of testsite.