by Beth Secor June 28, 2009
FacebookTwitterEmail
Disclaimer!!!! This is not a review, rather ceci une pipe!

18 Hands Gallery is an art space in the Heights founded by five clay artists, one of whom I believe is, if I have done my math correctly, Parvati, wife of Shiva in the divine form of the Warrior Goddess Durga. (8 + 10 = 18)

18 Hands Gallery is a gallery that features clay artists, both established and emerging, and in addition to exhibitions, also offer ceramic artists’ lectures and workshops. The gallery has recently begun showing some work by jewelers as well.

Before I further discuss the gallery, let’s talk about how ignorant I am about ceramics or pottery or the clay arts or fancy mud or whatever those people call it. Oddly enough what little experience I have working in clay directly relates to the main exhibition on view at 18 Hands.

In the fall of 1975 I took a ceramics class at Texas A & M.  Think about it –“Ceramics” “ A & M.” Uttering those words in the same sentence on that campus at that time, was akin to saying to a priest   “You’re wrong, the earth really does revolve around the sun” or to a landlord,  “Can we take a rain check on the droit de seigneur?  I’m just not feeling it right now.” 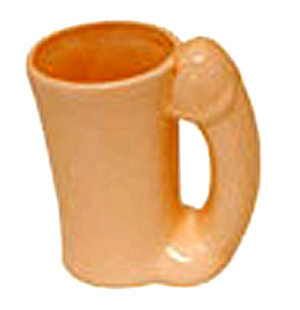 just exactly where do you put your mouth?

My ceramics professor, whose name I have forgotten and who was friends with the late Huey Beckham, did little in the way of teaching, but spent most of his time making hundreds and hundreds of penis handled mugs, which he sold at art fairs on the weekends. When he did deign to give instruction I found it difficult to concentrate, as my workspace was adjacent to the pecker steins, which I constantly looked at out the corner of my eye.  Let’s just say at age 19 my desire to grasp the subject superseded my capacity to grasp the medium.

My lack of attentiveness nearly led to my death. One Saturday during football season I went up to the ceramics studio and prepared to Raku two poorly made clay figurines, a Sphinx and a Centaur.   (This was during my fantasy mythological creature phase.) The kiln was outside, the weather was crisp, and I was ready to Raku.  I tightly packed the two figures in hay, and put them in the kiln, all according to instruction.

Currently on view at 18 Hands Gallery is Out of the Fire, an exhibit of Raku pottery created by Nicki Berndt, Renee Lindquist, Suzie Wignal, and featured artist Jim Shea. 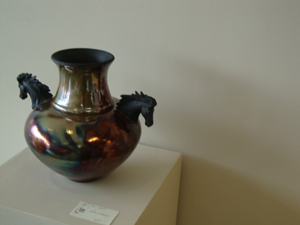 An example of a Raku pot by Renee Linquist

The Raku process, first developed by Zen Buddhist Masters in Japan around the early 1500’s, is comparable to the Abu Ghraib process, as it involves the shock of high kiln temperatures (1,800 degrees Fahrenheit), desecration of the Qur’an, severe temperature changes, disturbing photographs, and enclosure in airtight containers filled with leaves, sawdust and other materials. 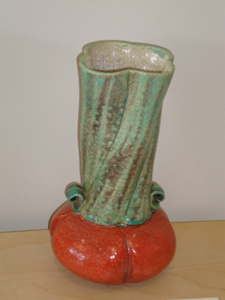 In 2008, Out of the Fire featured artist and co-director of the gallery Jim Shea studied with famed potter John Dix in Sasayama, Japan, using an ancient wood fueled kiln called the anagama, an experience Shea describes as a watershed moment in his life.  Shea’s latest work is inspired by his vegetable garden, and as he related to me, his inability to chose the correct fertilizer.  One such piece shown in the photograph on the right – forgive me.  as I am having trouble reading my handwriting – is either called Tomatoes or Corrugated Penis and Engorged Scrotum.   What was in that fertilizer, for god’s sake? 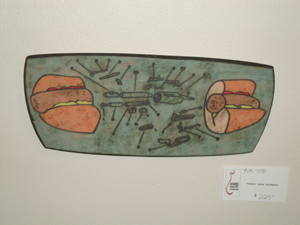 In addition to its monthly exhibitions, 18 Hands also carries the work of other artists. For example, Austin-based artist Todd Van Duren has on display a series of wall pieces depicting exploding objects, such as hotdogs and dachshunds.  Hotdogs and dachshunds, what do those shapes remind me of?  Oh yes, my college ceramics class.  In case you are wondering why I don’t have a withered arm after the Raku fiasco, it is because I immediately submerged my arm up to the shoulder into a barrel of wet clay, which saved me from having third degree burns according to the infirmary nurse.

Next Week: Wind Water Gallery, which is not really a gallery but has the word Gallery in its name.

Just the beverage container every Judy Chicago Dinner Party should have.

If I am not mistaken, does Judy not really care for Peckers? Isn’t she more of a taco gal?

I do love ruining a good dinner party. I won’t be able to see an image of that J. Chicago table setting without picturing those nifty mugs. Somehow they deserve each other.