Within the same block of 19th Street as Galley M Squared is H Gallery.  H Gallery is under the guidance of a former student of Amy Blakemore , Heidi Powell-Prera, a photographer who is assisted in her endeavors at the gallery by a group of volunteer artists. According to the website:

Work is not harshly juried, so therefore the gallery offers a place to exhibit their work without fear of biased critique or rejection.  All age groups as well as levels of experience are invited to submit work…

Now I am going to surprise all of you, myself included, by saying something nice, rather than ugly.  I appreciate it that H Gallery and Powell-Prera are open and honest about what they are doing, rather than pretending that the gallery and its artists are something other than they are, unlike a certain gallery down the street who is the only other gallery I have talked about and whose name I will not mention.  And this directness and honesty was reflective in the work I saw at H Gallery and on its website – there wasn’t an orange peeler among the bunch. 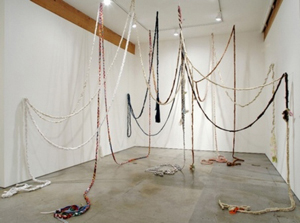 What is this Shit? by M K Muth

Although I wasn’t crazy about everything I saw, and possibly none of the H Gallery artists may ever be in the Whitney Biennial (although every other year one of them could win a Hunting Prize – and no I am not talking about the years that Robin and Francesca won, but the other every other years – plus maybe they could chosen for the Whitney, because shit, the Whitney picks people like M K Guth, and some of their work is better than his, so seriously what do I know, plus who am I to tell a person he or she can’t do something – you are the master of your own destiny, etc. etc.), but no matter what the quality of the work, the H Gallery affiliates seemed to be serious about what they are making and how they made it. (I bet by the time you got to the tail end of that last sentence, you couldn’t remember if I was talking about art or was quoting Ahmadinejad .) 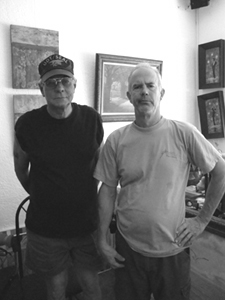 In all fairness, I have to admit that I saw very little art on the day I went into H Gallery.  It wasn’t that it wasn’t on the walls, and in the glass case, and on the floor, and under a table, and outside on pedestals – because it was.  It was everywhere, cheek to gill, salon style as it were.   I didn’t see the art because I got shanghaied on the way in by a certain Mr. Eliason and Mr. Adams.   Truth be known, it was more Adams than Eliason that did the shanghaiing, as Mr. Eliason didn’t talk much and mostly sat behind his walker in chair drinking water.

Adams was eager to talk about and show me his work, which is made out of scrapped railroad spikes and rails, and kind of looks like Jim Love’s had Love been Patroclus, Captain of the Myrmidons or maybe Steven Segal sans steroids.  No flowers in pots or giant jacks, but instead lots of Warriors in Warrior type situations including Warriors- Assault, Warriors- Carnage and Ruin, Warriors – No Retreat, and by the time I saw it,  Warriors- Boredom . By the way, if you are interested in Adams, he lists his relationship status as Complicated.

I suppose I could have stayed longer at H Gallery and looked at the rest of the work, but I get extremely nerous when people I don’t know talk to me too much and too closely, so I left.  But before I leave you- and I promise to stand at least five or six feet away from your personal space – let me show you a couple of my all time favorite pieces I found on the H Gallery Website: 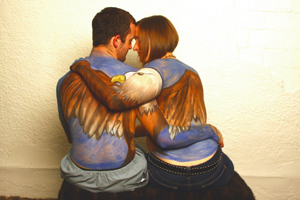 Wings of an Eagle by Vonetta Berry

This is the work of Vonetta Berry . I love it, is it crazy or not?  What is going on here? I will tell you what is going on – these people are naked from the waist up and have a single eagle painted on their collective backs, an eagle with an especially gigantic head.  Vonetta has also photographed couples with back paintings of owls, crows, phoenixes, and dependent on your height and width, quite possibly Andean condors and bee hummingbirds as well. If you are wondering what to get your honey for your anniversary, problem solved. 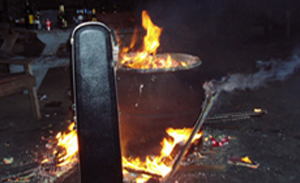 Seriously a bad idea, by Art in Motion

OK, here is my next favorite – Art in Motion , a group, or maybe a person from Denton, Texas.  This photograph is taken from Art in Motion’s website describing its inaugural event, which took place in 2000 and is described in part as follows: I had a band play, while some kids made trash art in an apartment courtyard. I’m sorry, I’m thinking more like I had a band play, while in the meantime some unsuperviseds five year old started a fire with some gasoline and oily rags in a trashcan and burned the apartment complex to the ground, David Byrne style, oh yeah.

Other actual favorites, on the serious tip are Thomas Freightman ’s beautiful Black Cowboy and Ashley Aleman ’s Dead Bird.   The prices at H Gallery are easonable, and if you don’t mind wading through the good, the bad, and the in between, you might find a hidden treasure.

Join me next week when I visit 18 Hands and Wind Water Gallery, also in the Heights.

grab an editor while you’re out there

Can you set us up with some kind of criteria for your reviews of these galleries, shows, and exhibits? What makes you an authority?

We (all of us need) fucking editors.
Some of us can’t help our stinking IQ’s, or education or our parents.
We try anyway.
Art Whore , will you actually go first and grace us with your fucking criteria?

It is a question that is all. In my opinion, if someone, anyone is going to go around voicing their opinions and expect any sort of credibility for their reviews, then they should at least state their criteria of review as bases for their opinion.
Even though I did not ask you the question, I will grace you with my criteria. I look at art with an open mind and do not judge work as good or bad because someone is a core fellow or that the artists studied under a particular artist, photographer, or whatever. There seems to be a little brown nosing going on here and I, based on what I have seen so far, do not like this place. You Bruce seem to be a real snot based on your reply to my simple question.
I am sure there are very nice people who visit this blog and to them I say, â€œArt in this town is fantastic and something we can be proud of, happy viewing.â€ To you Bruce I say,â€FUCK OFF.â€
Good by all.

Yes, I’m a real snot and I’d say lots of things right back to you if I thought for a minute you’d have an actual feeling or could understand it once you had it. I’ve made a living here for the past 18 years, on my art, not teaching or writing or drug dealing or alternate occupations.
I could have had better livings in any number of things , or husbands, but I picked this one. I don’t have a brown nose and I wasn’t a core fellow, although I’ve known a few. Rainey chose to pay this person (I hope) for her views and that in the very least is a reason for reading and considering the writing. Fuck you too compadrae …in the very nicest of ways or positions.

And when someone follows a link about ‘every friggin gallery’ in Houston to here…and finds this conversation in the comments? Bleh. Keep shooing the good artists off to NY and LA!
We MUST be rednecks in Texas and the art MUST be awful because we can’t even write/talk about it like civil children would. I’m not saying disagreeing is bad. In fact, I would say people can learn the most from good arguments, but name calling and insult slinging gets us no place. Which is sad, because I like to learn from what I read. Someone says that criteria or authority is needed to review art?? Let’s talk about THAT!! I mean, geez…what an open door to a topic that can lead SOMEWHERE instead of the nowhere that the comments section now lies. Come on kids, and use your self-control, ’cause I’m tired of artists and art getting a bad rep. No more whining. Help move things forward, not back. You’re making it hard on the rest of us who keep our fighting words in our pockets, or more appropriately, in our work.

To Whom It May Concern,

In my initial “Every Friggin’ Gallery in the Whole Damn Town” I stated that these were not intended to be reviews. If you read the H Gallery blog over again, you will get that I like the place. I like that it exist. I think places like it are important. I pointed out artists whose work I liked.

But, just so this is clear- these aren’t reviews, and I quote.

I donâ€™t want anyone to have any false expectations – these arenâ€™t going to be full on reviews and I am not going to give you the entire history of the space, I might even get the name and address wrong, and if a place is too far away, Iâ€™ll just make up shit about it.

None of the aforementioned artists will ever be in the Whitney Biennial. Just, you know, FYI.

I love reading anything Beth Secor writes on glasstire. Please give her a raise. And now that her writing has iinspired someone who named themselves “art whore” to get their feelings hurt by someone named “bruce,” I love it even more.