There are at least 100 galleries, if not more in Houston, and I would fathom a guess that few among you, my dear readers, have even visited 25 of those, if that many. And why is that?  Why don’t we go to more galleries? Is it because they are too far away and gas is too expensive? I know why you don’t go.  It’s because those other galleries don’t show Core Fellows, and you are really worried about appearing uncool.  That’s the real reason. Admit it.

Well, I already know I’m not cool and because of this I have the freedom to visit every friggin’ gallery in the whole damn town.  I am going to start out in the Heights and then spiral out to other parts of the city. I don’t want anyone to have any false expectations – these aren’t going to be full on reviews and I am not going to give you the entire history of the space, I might even get the name and address wrong, and if a place is too far away, I’ll just make up shit about it. And no, I don’t have air conditioning in my car and yes, I have bursitis in my right elbow and am typing everything out with my left hand

Day One: The first gallery I went to is Gallery M Squared on 19th Street in the Heights.  I have been there once before for a benefit for the participants in Art League Houston’s Healing Art program, but that time I got out of there as quickly as possible because the place was crowded and I was feeling self-conscious, due to the fact that I had fallen in the street while walking my dog the week before and still had a giant oozing scab in the middle of my face, This time around I saw an exhibition called Taking Flight by six women who are members of The Phoenix Art Group, which is named after the bird and not the city, and is not to be confused with the other Phoenix Art Group in Phoenix, Arizona. 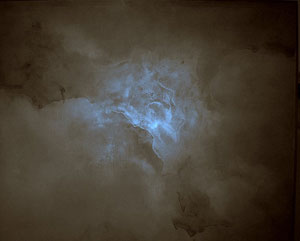 I am sorry to say that I hated most of the work I saw in Taking Flight, with the exception of one artist, Dora Dillstone.  (Although I was not allowed to photograph the pieces in the show, Dora gave me permission to reproduce one of her other works.)  For Taking Flight Dora made, among other paintings, a series of ink drawings on rice paper, most of which depict clouds or billowing smoke, and that have press type dates (1/2” tall or so) placed on one of the corners of the glass causing it to cast a shadow onto the work.  The dates relate to specific incidents which had a profound affect on the artist, such as 9/11/2001 and the atomic bombing of Hiroshima (8/6/45).   I honestly liked these paintings, in that they were serenely and beautifully rendered, and yet depicted the most tragic and catastrophic events. Unfortunately there were several factors that undermined the potential power of this work.  For example, I didn’t care for her use of press type, as it looked clunky and out of place, although I understand the importance of the dates.  I also did not like the presentation of the pieces at all. The dark green walls coupled with the black frames and their small black borders crowded the works and the shit loads of dust and hair between the rice paper and the glass just ruined the whole effect.1  It was kind of like having sex with a really handsome guy but half way through you notice that he is completely nasty and filthy and he’s got cheetos in his teeth to boot, and so you swear that you will only do it with him maybe say, like a dozen more times before you get the nerve to ask him to clean up with a dirty towel. Well, maybe it’s not exactly like that and maybe I revealed too much about myself, but you get the point. 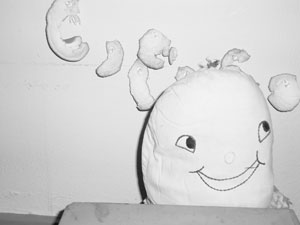 The very worst pieces in the show –  and maybe they weren’t actually in the show and maybe they were instead trash that had somehow not made it to the dumpster –  were both made by a person whose name I will not reveal, in order to spare them the public humiliation. These works were constructed of orange peels, which in one case had been tacked to the wall behind the gallery desk, and in the other “artfully” strewn on the top of a pedestal.  Since I can’t show you the original because of the no photo rule, and in order to help you understand my extreme annoyance, I recreated and photographed one of these “whatevers” at home. Granted the gallery attendant did not look like Humpty Dumpty, and the “artist” did a better job of peeling her oranges in long coiling strands, but you get the general idea. Except I kind of like my photograph, so maybe you won’t get what I’m saying after all.

I truly believe that it is important to give people opportunities to be creative. Being allowed to create without censure can be beneficial to a person’s general sense of well being and mental health. But just because a person creates, are they allowed to call themselves an artist? I like to cook, but I’ll be damned if I call myself a chef.  And I like to remove important organs from little animals, but does that make me a veterinarian? No, it makes me a dangerous psychopath. I’m just saying.

1I myself have exhibited paintings accidentally loaded full of cat and dog hair, so I know what I am talking about.

Feels the orange peels were the most important thing you saw.

i’ve been to over 200 houston galleries… cause i’m a baller and like leggy gallery wine.

what’s the point of your entire second paragraph?

is gallery m^2 the same as e-squared over c to the forth gallery?

cheetos are an aphrodisiac dear.

are you getting paid for this?

What’s a baller?
Cheetos are most certainly an aphrodisiac and much cheaper than Viagara.
Gallery wines are almost always undrinkable and their champagnes are even worse.
Whatever she’s being paid, it isn’t enough.
I like her.
I like to cook too.

The reason I don’t visit galleries more often is because I hate disappointment. I’m continually disappointed it seems. The trip to this or that gallery in whatever city usually isn’t worth the time or the effort (cheap hotel / or air fare) it takes to get there and then to get back home.
The wines are the least of it.

Dora Dillstone also has a beautiful piece in the Glassell Student Show, called (if I remember correctly), “O, Galileo,” right inside the main entry from the Montrose parking lot entry (both parking lot and entry have been very nicely redone, btw, after months of construction.”

it makes me so happy that you have been to over 200 galleries and still haven’t heard of the Core Fellows. You are indeed a rare, but beautiful bird.

However, not knowing could possibly not be a beautiful thing but could indeed more to do with the drinking. Lay off the leggy gallery wine, its chock full of antifreeze.
Hey, I know you, weren’t you one of the Jim Jones boys?

You should still go to galleries- there is lots of wonderful stuff out there. Life is full of disappointments, bit deal- life is also full of a lot of funny, wonderful shit.