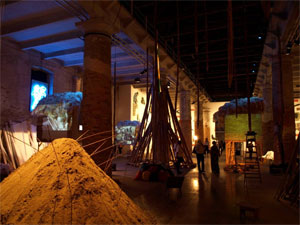 It is the eve of the public opening of La Biennale di Venezia, I am making my way to San Marco from party to party through the aqua alta (high water) that is fittingly flooding this moribund city. I keep my shoes dry by jumping from lamp post to planter or stone while tourists walk barefoot and Italians don plastic bags on their shoes. The instant I get to San Marco the lights come on what is now a lake, there are ripples on the surface and a full moon shinning on. The cafe tables and chairs are sitting empty in the water, but the cafe bands are still playing. A German TV crew is on the second take of a news item. A big barefoot American in a suit ambles through parting the water muttering “Disgusting!” Once you have been in Venice for a month and the city has punched you in the stomach frequently and mercilessly, considering art as merely the making of something beautiful becomes an increasingly ridiculous proposition. Want beautiful? Focus high definition cameras on the macro and micro around you and re-project the images in a darkened room to a captive audience. Presto, you have beautiful! As a matter of fact, this is Steve McQueen’s formal approach to the Great Britain pavilion. The Brits, in traditional fashion, are already engaged in a battle over their own show. I spotted McQueen visibly upset outside the British compound arguing with a big suit type a couple of days ago. Don’t let it get to you my man! 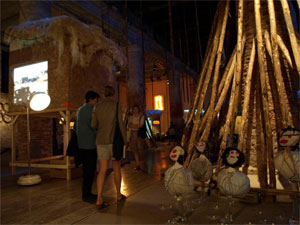 Another view of Tayou’s installation

But I hear you; you are not in the mood for Italian lento or flooded thinking. You want an executive summary. Okay, the biennale is pretty. Like a pretty wedding. Not much to say “Disgusting” or “WTF?” That is expected among the national pavilions and their archaic art Olympics and maybe understandable in the myriad of seriously curated or seriously funded exhibits all over the city. But pretty is also the mood of the main curated show at the Arsenale and the Giardini. “Making Worlds” as city billboards announce is the title of the show. That was one of the many literal signs that warned me for days of a dumb groom at a pretty wedding. Nothing wrong with pretty, enjoy the good food and the open bar. 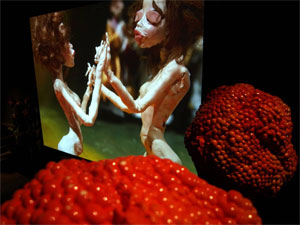 There are show stoppers in this biennale, dancing drunks at the party. Among the many installation works, the multi-media mega-installations stand out. At the Arsenale, Pascale Marthine Tayou (reviewed back in 1999 by the NYTs as “scatter art”) robs the show. An immense sensorial feast around objects and multi-video projection that reopens the memory of those of us lucky enough to have grown up in the “third world.” A feast with an ominous bend and site-specific reference gallantly resolved by an army of sharpened poles hanging from the ceiling. I recognized Tayou paying a visit to a collector’s party a couple of nights ago. He was a bundle of energy and told me “the next one is going to be much bigger” before he was whisked away to the next party by his handler. 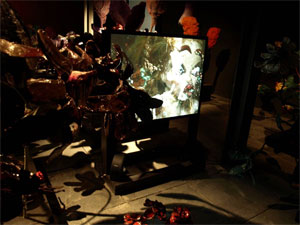 Another view of Djurberg’s installation.

At the Giardini, it is Nathalie Djurberg’s turn to entrap us in her Garden of Eden. An orgy of sensual sculptural plants and a set of Claymation projections depicting the condition of women rawly exposed in multiple ways. The work is so patently superior that Djurberg deservingly ran away with the Silver Lion for promising young artists. Bruce Nauman also ran away, first from his own opening on Thursday after a short photo-op and one day later with the Golden Lion for best national participation. A good show for the US pavilion, but it is Nauman as we know him even after spending two weeks to complete the installation of his work. The US pavilion is always outstanding anyway; being the only ones with air conditioners, an odd presence in Venice. The Gold Lion for best artist went to Tobias Rehberger for his cafeteria environment, a work of relational art that works well enough not to be noticed as a Biennale artwork. Paradoxically the old French-German-British imperial rivalries are recreated in their neighboring pavilions by outdoing each other in denying their former selves. The Germans even chose Liam Gillick as their representative, who casually explained his approach to a fortunate gathering who stumbled upon his informal conversation. These three pavilions are worth experiencing and arguing about with anyone without blisters on her feet. 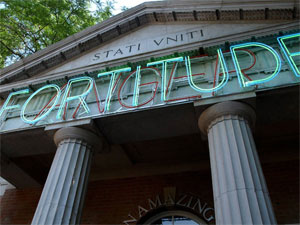 The entrance to the US Pavilion.

If the Arsenale and Giardini were not gargantuan enough to require an entire week for a basic appreciation, there are also the parallel exhibits all over the city: from the attention-grabbing Russian submarine in the Grand Canal that becomes silly as soon as you have enough time to navigate past it, to the grandiose In-finitum exhibit at Palazzo Fortuny where beauty will grab you and throw you down the stairs. We will talk about them some other day. It is time to do laundry and replenish the refrigerator. 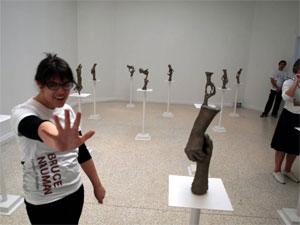 I waited for the party crashers all week. There are many who stage interventions around or even in the Biennale. I have seen plenty of attempts to do so since I took up residence in the area. Mostly youth driven but precipitously failing in their material execution. Planting a 4×8 piece of plywood covered with printouts on the grounds near the biennale or pasting some “*(@*$!” equivalent posters here and there will not do it guys. Party less and work harder. Especially when you stage your intervention only long enough to get some good pictures and particularly considering the benevolence of the city to the certifiably crazy. There was an effort I really appreciated though. The three quixotical vessels of “Swimming Cities of Serenissima” that floated up and down the Bacino (the open water area in between Venice and the Lido) after navigating down from Slovenia, accosted but let loose by the water police. There were also the instutionalized party crashers. Notably Michelangelo Pistoletto whose performance I witness first hand. He recreated his room of large mirrors for the biennale in “Twenty-two less two” and on Friday afternoon, he finished the work by sledge hammering his way around the room. Mirror pieces flying everywhere. I confess that I had goose bumps, and that I was childish enough to pick up a large piece of mirror and have Pistoletto sign it. He had to run from the mob of autograph seekers that ensued. Ten minutes later, the exhibit had been cleaned up, mirror pieces swept to a safe area demarcated by tape on the floor. No more stepping on mirror pieces. 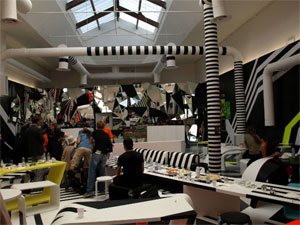 I wish I could say la biennale “e una bestia” [it’s a beast] as one of my neighbors referred to his boat while lovingly working on her, thirty-five years of varnishing and laboring to keep the beast afloat. He looked over at the group of Canadians fumbling their way down the canal in two plastic canoes and said “turisti!” while shaking his head. Yet this is still the Biennale. There is an immense amount of beautiful work. Be a tourist, come and see it if you can. If you cannot, get a feeling for it virtually. And do not stay a month beforehand because you may start finding the laundry hanging across the streets more worthwhile than a lot of the artwork. 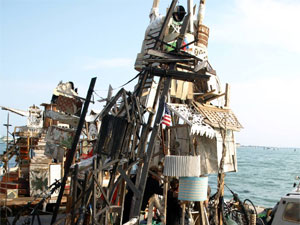 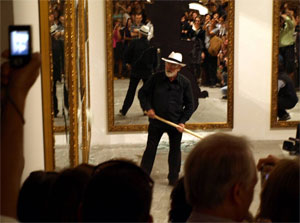 Photographs by the author.

Jorge Misium is an artist and part-time writer residing in Venezia, he’s at work on an outdoor project for OPEN’09 launching September 3rd in the Giardini and Lido di Venezia.

That security guard looks like she is in a Motown song. Great article.

yes it doo!
I can’t remember the name of the space puppet show from the 50’s/60’s….but that other thing looks just like that!