Rudolf de Crignis and the Illusions of Minimalism

At first glance, Rudolf de Crignis’ paintings at Lawrence Markey look like monochrome fields, shades of pure blue and gray applied with minimalist austerity. But of course minimalists by and large hate the term (Philip Glass once exclaimed in an interview "I think that word should be stamped out!"), and these paintings go a long way toward demonstrating the source of that distaste. This isn’t the minimalism of Ad Reinhardt or Yves
Klein (although one painting comes strikingly close to his signature
blue). Dozens of layers of color, pain-stakingly applied by brush in a crosshatched pattern, vibrate intensely across a shifting field. It’s impossible to capture the effect in a photograph, but the detail below should give some idea of the texture. These are disorienting paintings that pull the eyes deep into an enveloping surface. While staring into a "gray" painting (made without the use of any gray paint), I literally began to see rainbows appear over the canvas. (Before you ask, I was still on my first glass of wine). This is where minimalism becomes psychedelia, or, if you prefer, op art. 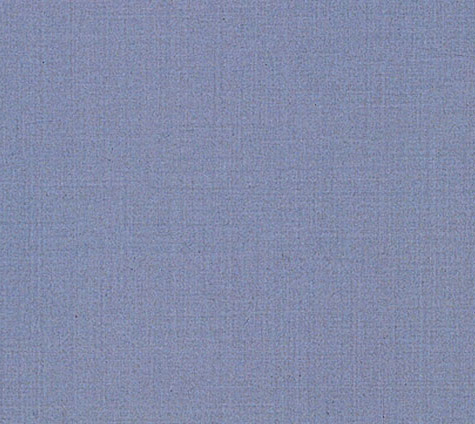 Still, our nomenclature doesn’t totally betray us: these paintings could be described as La Monte Young made visible. Young, considered by some to be the first American minimalist composer, creates "standing waves" of sound in his installations (such as the Dream House in Tribeca), so that what sounds static at one point in the space shifts dramatically with even slight movements. In Young’s words, this allows "the listener’s position and movements in the space to become an integral part of the sound composition" (see here). The "composition" becomes inseparable from the act of perception. Similarly, de Crignis has said that in his paintings "visibility becomes a kind of event. One that requires concentrated participation from the viewer" (see here). In both cases, precise, layered compositions of simple tones and colors give birth to a perceptual labyrinth. These works act, in a sense, like the term that purports to describe them: an apparently simple surface that belies a dizzying field dancing at the edges of perception. An observer need only move around in them a bit to recognize the depth of the paradox. De Crignis’ exhibit at Lawrence Markey, "Grays and Blues," runs through July 3.