by Garland Fielder May 26, 2009
FacebookTwitterEmail 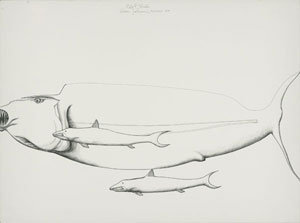 Lucas Johnson: Drawings 1971-1990 at Moody Gallery presents the artist’s mid-career works, lyrical renderings of the natural environment Johnson immersed himself in before his untimely passing in 2002. The pen-and-ink drawings — part Ralph Steadman, part Pieter Bruegel — may evidence a refinement of craft, but Johnson never sacrificed the playful inspiration he found in natural forms. The show is permeated with an old school sense of workmanship as well as a sense of wonder that delights its viewers.

During the 1960s, Johnson spent a lot of time in Mexico. Chilean writer Roberto Bolaño, who lived there in the 60s and 70s, described the country as “a vast, almost imaginary place where freedom and metamorphosis were a daily spectacle.” Johnson’s humanistic approach to art making was not shaped by academia, but rather by a life filled with persons of intellectual and creative interest. The artist’s imagery often takes on a surreal quality similar to that found in the literature of writers such as Gabriel Garcia Márquez. Poetic license trumps any logical structuring of the picture plane; Johnson’s work is more interested in the imagination than humdrum day-to-day existence. An avid angler, the artist illustrated this passion with fantastical strokes implying movement. His love of the ocean and marine life sets the tone for drawings that are completely at ease with their chimerical nature.

In the quiet yet potent work Pilot Fish (1987), Johnson sets up a simple narrative of symbiosis depicted by two small hangers-on set astride a vicious-looking host whose sharp elongated teeth are all business. The line quality is delicate — a bit of stippling here, a thin expressive line there — enough to define shape without implying a heaviness of content. These drawings have room to breath; conveying meaning without overstatement.

Other works, such as The Horizon Line (1987), incorporate similar fantastical marine life with pueblo-inspired architectural motifs. Outlines of ladders and outcroppings of fauna remind one of dusty, remote places of intrigue. The balance between soft line and repeated patterns has the hallmark of a dream; a barely-remembered, introverted environment with special meaning only for the viewer. 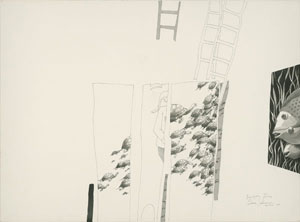 Some drawings in the show are even sparser in content. Ink washes gently describe a plateau vista and are interspersed with a patterned element that seems ripped from another context altogether. Yet the homogenous way the work is rendered sustains the viewer’s belief in it. Johnson’s brushwork conveys a sense of play; it is loose, but not non-committal. His art walks a fine line between the descriptive and the imaginative; the viewer instantly recognizes certain archetypal elements without having to think about them, absorbing the imagery almost lazily, like taking in a balmy afternoon with no particular agenda in mind. Johnson’s work grew from an enviable life spent appreciating the splendor of existence that surrounds us; a beauty that needs no advocate, just a push in the right direction from time to time.
Lucas Johnson: Drawings 1971 – 1990
Moody Gallery, Houston, Texas
May 2 – 30, 2009