Marlene Dumas: Measuring Your Own Grave

by Laura Lark May 12, 2009
FacebookTwitterEmail

You don’t view a Marlene Dumas painting; you are confronted by it. Marlene Dumas: Measuring Your Own Grave, her first North American mid-career survey (organized by MOCA LA in association with MoMA and curated by Connie Butler, presently at the Menil Collection), affords a rare opportunity to catch this painter’s provocative, controversial and, at times, painfully personal work up-close.

Marlene Dumas, The Woman of Algiers, 2001...(image details below)

There is something in every Dumas work that is at once terrifying and awe-inspiring; naive and knowing; gorgeous and hideous. It seems impossible to take in one of her paintings without feeling disturbed on some level. This is apparent even before you enter the exhibition: hung in the outer hallway is the human-proportioned The Woman of Algiers (2001), which depicts a nude woman being forcibly led by the wrists. The viewer is made complicit in her violation, as both chest and genital area have been "censored" by rectangles of jarring black paint. Dumas skillfully portrays the woman’s confusion and fear with trademark smeary gestures, and with just a few more strokes of the brush she draws her viewer into a world where a woman is dragged from her home, naked, to who-knows-where and for who-knows-what future treatment. Paradoxically, the figure of The Woman of Algiers is painted in a stirringly beautiful fashion, particularly below the lowest "censor" stripe. Washes of pale yellow-green contrasted with violet and cerulean make the woman’s skin seem as sensitive as a lily petal … or a bruise.

The Painter (1994) is hung well inside the gallery, opposite the entryway and directly facing The Woman of Algiers. It complements The Woman and reinforces the role of Dumas as the provocative contrarian. The canvas of The Painter, roughly equal in scale to the other, is filled with a single figure — a nude female child. Her hands and wrists are covered or stained with paint, one blue, one red. She has a pouty, willful look on her face, and her entire bare torso and chest are stained blue. She’s naked, unapologetic, uncensored and nobody’s victim. As Dumas has added a touch of exquisite color to a scene of prescient violence in Woman, she’s taken color and awarded power — a tad of it malevolent — to her larger-than-life Painter. 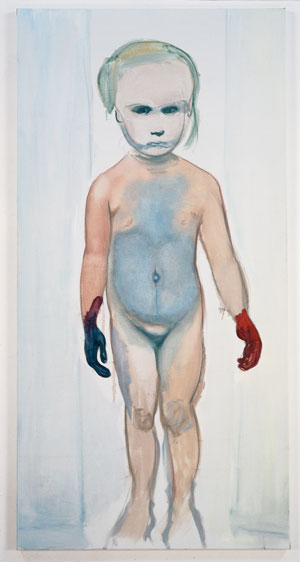 Sex, death, vitality, beauty — each gets a thorough reworking in a Marlene Dumas painting. Take, for example, her Magdalenas. Two of them, with the subtitles Manet’s Queen and Newman’s Zip, tower over the viewer, each a bit over ten feet. Each canvas is narrow, portraying a single full-length nude. One woman is black and fully exposed; the other, white, covers her breasts and genital area with long, dark tresses. Exposure and concealment amount to the same thing, however, since in both cases the figures seem to register the fact that they are being looked at, and simply shrug it off as though they were roughed-up versions of Kate Moss and Naomi Campbell. Indeed, models — whether those who pose for paintings or those who make their living as objects for the gaze — play a surprisingly important role in this show, and Dumas’s handling of the theme is complex.

This is abundantly evident in a 1994 work entitled Models, which consists of one hundred ink-and-charcoal drawings on paper, hung in a grid along an entire wall. To contemplate these portraits — which, like the remarkable Black Drawings nearby, are all faces that fill their entire sheet of paper — is to recognize Dumas’s gift for capturing the individuality and character of the person behind the persona. In this stunning display of mark-making variety and virtuosity, Dumas flirts with caricature without ever falling for it. Instead, she manages to uncover what is most alluring — or frightening — in each of these faces through a technique that has more than a little of the archaic about it. It strikes me that the curators missed a golden opportunity here, for it would have been fascinating to see one or another of these Models hanging in among the masks and treasures of Egypt or Oceania, as one finds a fitting Dumas tucked away among the Old Masters or Surrealists in other rooms in the museum. 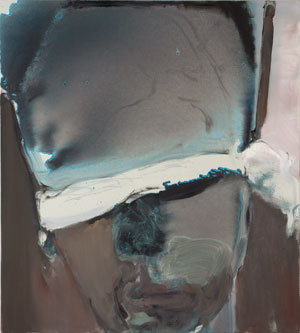 There has been much discussion of Dumas’s appropriation of images from pornographic magazines and newspaper photographs of death and torture, and indeed, one of the most interesting things about her work is that it forces you to reconsider your initial response to such sources. For through her deft use of color and her distinctive brushstroke, she brings a vitality and presence to her subjects that negate their generic origin and intensify their deeper meaning. In The Blindfolded Man (2007), for example, a stain of phthalo blue seeps into the painterly swipe that is the subject’s blindfold, and you feel the injustice of the man’s plight a thousand times more deeply than were you to encounter the source while flipping through a newspaper.

By copying, in effect, Gerhard Richter‘s painting of the dead Meinhof from the Bader-Meinhof gang in his Tote from  18. Oktober 1977 (1988), Dumas presents a double revision of source material. Richter appropriated the original photo, and then Dumas appropriated the Richter painting. However, Stern (2004), Dumas’s rendering of Meinhof is not the ghostly, beautiful image that we see in the blurry Richter painting. Dumas gives us death; a person leeched of vitality. Her gift for recontextualizing these images is extraordinary. She pushes paint about in an unorthodox manner — at times, it seems that she wants to rub the canvas raw; at others, it seems that she can’t decide whether she wants to draw her subject or model it with paint. It’s often as jarring as an unexpected hit on the brakes, as one sees on the enormous blue and purple penis in D-rection (1999). Or the result is as perversely ethereal as a glowing medieval rendition of something holy, as in Leather Boots (2000).

At times, Dumas’s ability to pervert stereotypical meaning is uncanny, frightening and slightly hilarious. Take her series of gigantic infants, for example. It is difficult to walk away from that gallery thinking that babies are something cute and cuddly. Conversely, her portrait of Osama Bin Laden (Pilgrim), laden with rose tones, makes the guy seem not so much demonic as just a tad overwhelmed and confused. 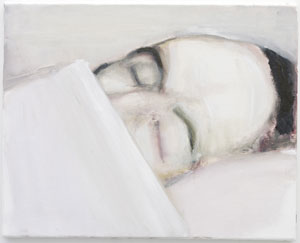 Marlene Dumas, Death of the Author, 2003...(image details below)

Of course, plenty of artists pride themselves in their ability to provoke, shock and challenge beliefs, but Marlene Dumas seems to stand apart from nearly all of them for many reasons — the first and foremost being that her medium is paint. Photography, installation, video, performance, sculpture: each of these mediums has been effectively used lately to portray violence, racism, sexual perversion or discrimination, and for good reason. Painting is not generally expected to bring forth the immediacy of politics, war and carnage any more than one expects to really enjoy the Super Bowl on a 13" black-and-white screen. Furthermore, because paint has come to be seen as a male-dominated medium, it is no surprise that recent generations of women artists have turned their talents to video, photography, installation and performance.

That Marlene Dumas has always made — and continues to make — such a powerful psychological and political impact with such a traditional medium is remarkable. She’s an artist who doesn’t seem to have ever doubted or questioned her own convictions, despite the fact that she’s been running solo her entire career, and that’s a good thing. Marlene Dumas’s works show us that no matter how many new technologies come along to tell a story, the corporeal nature of paint and the human hand will retain its own singular truth. Considering the strength of the convictions portrayed in Measuring Your Own Grave, Dumas’s truth may well be the lasting one.

Thanks for the informative, insightful review Laura. I would love to see this show, especially at the Menil versus the other venues. I love Marlene’s work and imagine it riffing perfectly off the permanent collection.