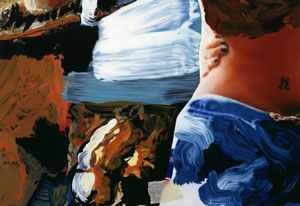 Posh, Thomson and Scary, 1997…Oil on Canvas, 22 x 32 inches…Courtesy of the Goss-Michael Foundation

Richard Patterson is a transplant to Dallas from Great Britain. Twenty years ago, he participated in the famous Freeze show, organized by Damian Hirst at London’s Surrey Docks – an exhibit which launched the “YBA” (Young British Artists) phenomenon. So it seems fitting that Patterson offer a survey of his work from the past dozen years at the Goss-Michael Foundation (The Michael half of that name is British pop star George Michael), but perhaps a more appropriate point to make about the venue is the artwork’s connection to pop culture, both Brit and Texan.

If he sometimes approaches his topics with knowing irony, Patterson’s take on popular subjects offers nothing much by way of critique and is refreshingly innocent of snark. A case in point is a suite of studies and paintings from 1997 devoted to the Spice Girls, which revels in their sex appeal by imagining them nude.  It’s thoroughgoing guy stuff. Who cares if their singing is insipid? Just look at those fine bare bodies! Thickly laid-on paint in the mixed-media studies signals the carnal nature of Patterson’s appreciation of their obvious talents, to paraphrase an old Joe Bob Briggs expression. The two oil paintings from the series – Posh and Thompson and Posh, Thompson and Scary (both 1997) – reproduce portions of one or another study. Photo-based portions are rendered almost as realistically as an early Chuck Close, but they also feature a monstrously painted, cat-like figure derived from the logo of Thompson Local, a British directory firm whose online directory service offers, among other things, information on London diversions ranging from art galleries to titty bars. 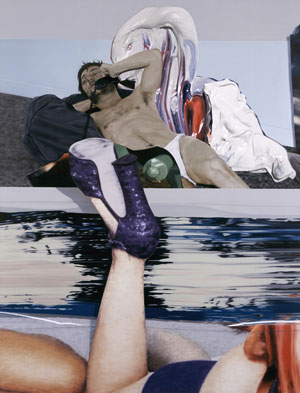 Reclining Nude, 1998…Oil on canvas, 58 x 44 inches…Courtesy of the collection of Vicki and Kent Logan,…fractional and promised gift to the Denver Art Museum

Several other small, quick studies in the show illustrate Patterson’s painting method: he lays paint-smeared acrylic sheets over photographs and very faithfully enlarges the results in oil on canvas. Re-contextualizing gestural marks in a photo-realistic environment allows for cool examination of their meaning, but it also produces a strange pictorial space in which realistic imagery looks incongruous and artificial. In a painting titled Exile on Jackson Street (2003), a Dallas Cowboys cheerleader gets the Patterson treatment. The painting conflates a hyper-gendered contemporary persona and a 1950s de Kooning Woman. A big-haired, red-lipped ultra femme smiles through paint gobs straight out of post war Ab Ex. The fact that the cheerleader is reportedly the painting’s owner makes it all the more delicious. And yet Patterson doesn’t overplay his hand: the woman is not ridiculed (as I may have implied above). She is objectively observed and probably desired. Just who the exile is remains uncertain. Perhaps it’s the cheerleader, lost in an art-historical pastiche. More likely, it’s the expat artist, immersed in Dallas’ culture where gender roles are polished to a fine sheen and public space is pubic space, in the words of culture theorist W. J. T. Mitchell. 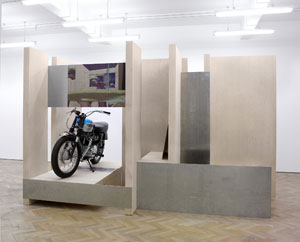 A large, quasi-architectural sculpture, Black Narcissus/Ellwood, L-Word: Culture Station (Zipper) 1B (2007), almost fills a room that is ordinarily the office of the foundation’s director. The title is a maze of references to items ranging from a 1947 Deborah Kerr film about Anglican nuns in the Himalayas (talk about exile) to the Showtime lesbian drama series. Dan Aykroyd’s character’s name in “The Blues Brothers” wasn’t spelled that way, but there is a heavy machinery outfit in Houston called the Ellwood Texas Forge which makes big steel tools for the oil patch and the military. That sounds manly enough to me. The sculpture itself is likewise complex with multiple interconnected planes of maple plywood and aluminum. Assorted images are printed on the aluminum plates: a Photoshopped collage of a Porsche and lesbian porn, for example, and an amalgam of bits from Patterson’s paintings with a semi-nude self portrait.
Oh, and there’s a Triumph motorcycle, naturally.

I don’t mean to make the piece sound like a jumble, however.  The craftsmanship is superb and the overall design is elegant. Even the incongruous motorcycle looks really good as it registers a masculine element.

While Patterson isn’t exactly a 21st century Alexis de Tocqueville or a postmodern culture critic, he is surely an enthusiastic and knowing consumer of American culture – specifically Dallas’s version of America. He appears to be engaged in an affectionate ethnography during his time in exile.