Jeff Elrod at The Modern 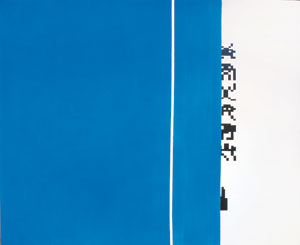 FOCUS: Jeff Elrod at the Modern Art Museum of Fort Worth is a small survey of paintings made over the past 15 years. It’s telling for Elrod’s aesthetic project that the earliest painting in the show is titled Endgame (1994). When you begin at the finish line, where do you go next?

And yet, Endgame actually does suggest a way forward. The painting is a simple abstract composition in which a blue field, interrupted by a vertical white band, encroaches onto hand-painted, pixilated critters derived from the Space Invaders video game. The slightly bent, Barnett Newman-like “zip” in the color field clearly references the discourse of post-war American painting with all its serious heroics. The sublime is now, remember. The comic digital monsters evoke other, less grandiose referents which —even if they aren’t exactly “now” anymore (the game was already antiquated in 1994) — have more in common with youthful pastimes than they do with the historical significance of 1950s abstraction.

Numerous pictorial and poetic possibilities arose as Elrod worked his way through the tensions between painting, considered as an important cultural expression, and the implications of digital-age image making technologies. Elrod created Endgame, in part, as an imitation of a computer screen. In time he turned to computer graphics as a direct source for his iconography.

In the Fort Worth show, a wall drawing titled Delete (1997-2009) presents the title’s command scrawled in shaky capital letters across a galumphing brown and blue 1970s-style “supergraphic” gesture. The drawing’s forms originated in a computer program and the tension between the hand-painted image and its source in binary code drives the work’s meaning. The curious twelve-year span of the work’s date also indicates something about its state of being: Delete lives in code on some hard drive or CD-ROM until it is materialized to meet the needs of the artist and a curator.

This last fact can have some odd consequences. Eight years ago, I reviewed an Elrod show at  Angstrom Gallery in Dallas which featured paintings that had arrived as emailed JPEGs and were realized in paint at the gallery. While that wasn’t the case with the Fort Worth exhibition, in at least one instance a painting exhibited at Angstrom in 2001, originally titled Swan Dive, was re-titled Great and re-dated 2003 —  that is unless my memory is worse than I think it is. It is quite possible that the painting was remade two years later and given a new title to go with its new incarnation, but then it would make better sense to date it 2001-2003, as was done with Delete. 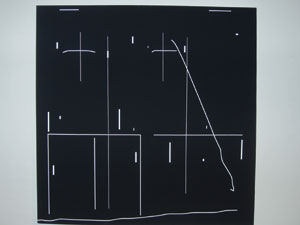 Regardless, Great presents a black ground bearing scrawled white letters which repeat the painting’s title several times and dissolve into meaningless marks as the reiterated title descends the picture plane. Drawn with a computer mouse and reproduced from a printout using a projector, tape and acrylic, the letterforms are very awkward. It’s as though Cy Twombly were lost in a digital box. The machine mindlessly recorded Elrod’s smallest gesture and in turn he faithfully reproduced what his printer spit out.

In their absolute flatness, the early works in the show reflect the airless two-dimensionality of a computer screen. A few years ago, however, Elrod began to complicate his pictorial space in works like e-bodies (2005). The electronic drawing source is still evident, but his trademark hard-edged squiggles appear in a red cloud of sprayed-on paint. Most of the canvas is covered with a light gray checkerboard pattern that he has digitally cut and pasted off-register in several places. The effect is a shuddering, layered pictorial space with a strange sense of depth that is probably only possible in a painting. I’m pretty sure that whatever his electronic drawing looked like, it didn’t look as good as the painting.

Dream Machine (for Brion Gysin) (2009), a large black-and-white painting, is the most recent piece in the show. The title refers to an invention by Gysin (a friend and collaborator of William Burroughs) that was purported to stimulate alpha-wave brain activity. Like some hard-edged Pollock, it’s a swooping, swirling all-over composition — except that, as always, it bears the unmistakable qualities of a computer drawing. Cut, copied and pasted passages repeat across the canvas in an off-register almost-grid. The scribbled gestures amount to canned calligraphy, so to speak, composed of two dominant kinds of line: one wide and looping, the other thinner and tapering. Almost certainly Elrod painted it in one pass, but the layering of the drawing process carries through the transition to paint and suggests an interior; a space behind the surface.

The conflicted relationship between the tradition of abstract painting — particularly the brand of abstraction that champions individual gestures — and digital image making has proved to be fertile territory for Elrod. Troping that apparent conflict has served him well so far.

{ Review }
Olafur Eliasson at the DMA