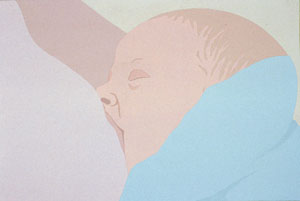 A few weeks ago I asked Francesca Fuchs if she would be willing to sit down with me for an interview about her work. In spite of the fact that I had never conducted an interview before, she agreed. She even offered lunch, and when I arrived at her home she made me a sandwich and vegetable soup that was, in her own estimation, “not the best soup in the world but not the worst either.”

That was fine, because it turns out that my interview skills are of a similar quality. We talked for an hour or so and I spent the next two days straining to hear my mumbling questions and Francesca’s answers through the static of a 20-year-old tape recorder as I transcribed the interview. Well, Robert Storr I’m not. My questions were pretty standard, I didn’t follow up on the intriguing aspects of her answers and I never got to the heart of what I like so much about Francesca’s paintings. So a week later when she had an open studio in conjunction with her recent Houston Arts Alliance grant, I decided to take another shot at writing about the work.

The part of our interview that interested me the most was the discussion that evolved out of her description of how, in her 2007 exhibition at the Contemporary Arts Museum Houston, she abandoned her previous practice of using tape to achieve hard, clean edges in her paintings. From her first show at Texas Gallery in 2000, Sleeping In, in which she made paintings of patterned bed sheets that had autobiographical significance for her, to her most recent exhibition at the gallery, Mom, which focused on motherhood with large paintings of infants breastfeeding, Francesca has made paintings that pit the autobiographical details of her life against the impersonal language of hard-edged painting.

For her show at the CAMH, however, she began to paint in what can only be described as a more traditional style with looser brushstrokes. She began to use colors that retained some of the pastel qualities of her earlier palette, but were decidedly less intense and more connected to material reality than the hazy pinks, hot oranges and light blues of the work in Mom. 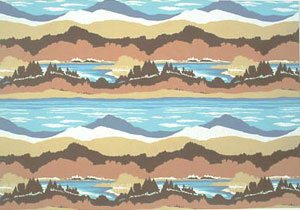 The most recent paintings in her open studio move even more decisively in this new direction. The extreme cropping and enlargement of infants’ heads, hands and faces in Momwas still in evidence at the CAMH show, but has now given way to images of sometimes empty rooms and kitchens seen from a neutral middle distance that establishes the viewer as an observer and not a participant. Everything about the direction in which her new work is heading causes the viewer to question where the interest in these paintings lies. Are they really just paintings of rooms and objects?

In spite of all the indications that Francesca Fuchs has lost her “edge” and allowed motherhood to soften her into making bourgeois paintings of her bourgeois life, Francesca argues that these paintings are fundamentally more compelling and challenging than the work that her previous methods allowed her to make.

I agree. And for me it has something to do with creating an image that doesn’t allow itself to come to an easy end – an image that doesn’t allow the viewer to find a resting place; a place where they are able to say, “here is what this picture means.” With her taped paintings, as seductive as they were, it was easy for the viewer to find those hard, raised edges and identify them with all the other hard edges in the world – the edge of a Judd box, the edges that represent divisions between countries on a map, races, genders and philosophies. 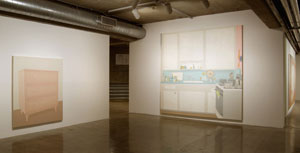 There is always an edge somewhere over which most of us will not step. The taped edge in these earlier paintings functioned like a wall which every other association the viewer had – the sweet sentimentality of babies, the pleasing associations of soft, familiar colors – had to slam up against and finally be destroyed. It’s a fixed fight in which the love of babies or the sentimentality of domestic life are never allowed to win. The viewer is always returned to the hard, measured surface of the canvas, and by extension to the world of contemporary art, in which a painting of a breastfeeding baby is to be read either within the context of a feminist agenda or as one more step in the endless evolution of hard-edged painting.

When I asked Francesca what she thought she might have gained by flirting so deliberately with traditional subjects painted in a more or less traditional manner, her answer was that she was unsure that she actually gained anything in terms of viewers’ perceptions. She said that it was probably easier to discount the pictures as simply unreflective paintings of domestic life.

Of course this isn’t true – by removing the literal and metaphorical edge of the tape and making more traditional paint marks that are, as she said in our interview, “equalizing,” she takes away the handicap and the contest between a sentimental reading and a materialistic reading is really allowed to take place – the outcome is not predetermined, and the surface of the canvas becomes transparent in a way that allows the viewer’s own experience to determine what they see. Because of this, the paintings become both more generous and more challenging, offering the viewer a choice as well as the possibility that no choice has to be made – that making a painting about a kitchen or a linen closet with no theoretical or political agenda is a philosophically monumental endeavor. That seems pretty radical to me. 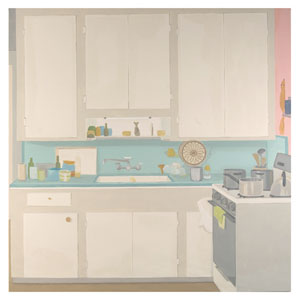 At the time of our interview, the painting in Francesca’s studio that left the most significant impression on me was a painting of toys scattered across a floor. It conveyed a sense of absence left in the wake of playing children. Monumentally scaled, as her most successful pictures almost always are, the toys in the painting were nearly life-sized and I thought of a box of my own toys my mom recently unloaded on me. 25 years after they last served their original function, their significance dwarfs their actual size. I liked the individual depictions of specific toys and the associations that they raised for me, but after I left the studio I recognized a lot of my own artistic impulses in the painting and because of that I was able to find a resting place; a place where I was able to subsume it into my own ideas and, in a way, defeat it.

In a painting of a bed, recently slept in and still unmade, I found a lot of painted passages where, as an artist, I imagined making different decisions and questioning some of the decisions Francesca had made. Because of those not insignificant barriers it was more difficult to put it to rest, but ultimately the painting seemed to me to be exclusively about the absence of what was once there, which always leads me to think of death.

In retrospect, the painting that made the greatest impact on me and served as the key to looking at all of the work in Francesca’s studio was a huge painting of a flowerbed. It wasn’t on the wall when she had her open studio, but during my earlier interview that picture was the one that wouldn’t let itself be filed away.

The flowerbed sat resolutely and deliberately in the center of the canvas and the green, brushy field of paint surrounding it never quite became grass, although it kept reminding me that it represented grass. The flowers functioned in the same way, painted in a gestural manner in which they never quite became what you knew they were meant to be. 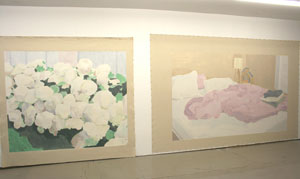 Hydrangea and Bed, studio shot...(Note: Hydrangea is not the flower painting...discussed in the article.)

The painting wouldn’t let me interpret the flowers as memento mori because they were still alive; rooted in the soil. They weren’t wild flowers, and their confinement inside a circle of landscaping stones drained them of any Romanticism I tried to attach to them. But finally, it was this obstinate painting that helped me to understand that it was only when I let all the paintings become a living space – one in which the children’s toys sit out in the room next to the parents’ room, in which the bed still lies unmade and the flowerbed sits outside the walls of the house waiting to be watered – that all the works came completely alive and began to function in the radical way that Francesca believes they do – to both recall and manufacture a memory.

I remembered getting up very early in the morning when I was a little kid because I had insomnia, playing with my G.I. Joes in the dark until I could take it no more and then going in and waking up my parents and dragging them out of bed because I was lonely and had been awake since four in the morning. My mom would get out of bed, my dad would head to the shower and I would look back over my shoulder at the rumpled sheets as she walked with me to the kitchen. I would sit at the bar waiting for my toast, rolling and unrolling the plastic placemat, and look out through the condensation on the sliding glass door into our backyard at the hazy grass and flowerbeds.

I feel as if those memories are real, but I also know that Francesca’s paintings played a critical role in taking a vague sense of memory and building a concrete narrative that had as much to do with her paintings as with my memories themselves. Her paintings opened up, for a moment, the same kind of experience for me that the taste of Proust’s madeleine opened up for him, and while it is a deceptively simple thing, it’s no small feat.

The literary critic Samuel Johnson said, as quoted by Harold Bloom, “nothing pleases long except just representations of general nature.” This is what I love about art whether it’s painting, sculpture, literature or film – that sometimes it can come close to representing life. By abandoning some of the more obvious markers of conceptualism and daring to paint and make pictures that are simpler, more direct and more transparent on their surface, Francesca allows her paintings to do something much more challenging than simply look “edgy”; she comes one step closer to creating a just representation of nature.

Michael Bise is an artist living in Houston.