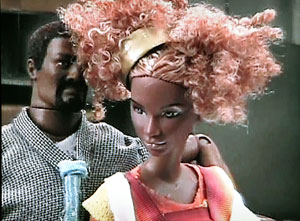 Houston’s Contemporary Arts Museum currently feels more like a mini Times Square than a museum. With nearly fifty video artists represented in Cinema Remixed & Reloaded: Black Women Artists and the Moving Image Since 1970, there are few screen-free zones to turn. That said, virtually all of the show, co-organized by CAMH curator Valerie Cassel Oliver and Dr. Andrea Barnwell Brownlee, director of the Spelman College Museum of Fine Art in Atlanta, is worth putting a little strain on your pupils.

Upon entering the exhibition you are faced with Tracey Rose’s The Wailers. Young men dressed as Hassidic Jews are playing a game of basketball. Underwater. Watching the larger than life-size players glide through the pool is so absorbing, you may feel the urge to extend your hands to be passed the orange ball. Although this is a dazzling piece to start with, after walking the show I was not convinced at first that it should serve as a herald since it did not quite prepare viewers for what was in store. Then again, having gone through the exhibition several times, with of the range of topics addressed and styles used, I’m not sure a more fitting piece exists to symbolize this eclectic group.

Although it might be especially difficult for the ADD generation to give these artists the patience they deserve, consider this a break from YouTube. The work here is visually stimulating, the thoughts behind the pieces profound and you are guaranteed to walk out of the exhibit with more to discuss than just how adorable that hamster on the piano eating popcorn really was. 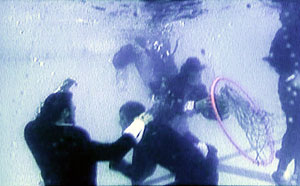 Arguably, all of the artists in this understudied group deserve a room of their own, but presumably because of space issues, only some get it. This is often frustrating because for the most part, these artists have transcended hackneyed political ideas and want to educate, while at the same time producing work that is visually arresting. With so many pieces working in both directions, the show asks its audience not only to dedicate themselves to viewing the often transfixing work, but also to take the time to listen to the message being conveyed.

As I walked through this explosion of both historically relevant and lively pieces spanning over thirty years of video art from African American women, I continued to wonder why the works had not been arranged chronologically. Since pioneers such as Adrian Piper and Howardena Pindell paved the way for many of the younger artists in the show, it might have been nice to somehow emphasize that fact with the structuring of the exhibit.

With so many directions to look in and almost pitch-black labyrinthian hallways to get lost in, I was unsure if the primary goal of this exhibition was to educate or simply give onlookers an aesthetic experience. Like many of the pieces included, it seemed to want to go in both directions. On one hand, visually most of the show looks so terrific that it’s almost worth the scattered frenzy it creates. On the other, with audio issues and general distractions, we all may be missing the point(s).

To accommodate the show’s impressive list of artists, the museum has converted the interior and added several mini-screening areas to house some of the monitors. But because of the proximity of the screens outside of these rooms, it was worrisome to see many of these women still competing for attention, especially against one other. Narrative pieces are often placed up against other narratives, causing the women to talk over each other and often leaving viewers unable to give full consideration to either artist. This seems particularly odd for a show that is supposedly giving voice to a group that has struggled so long to be heard. 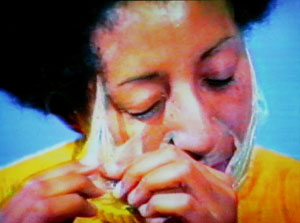 Howardena Pindell’s evocative piece Free, White and 21, in which she speaks candidly to the camera about her experiences with racism, has the misfortune of being placed opposite Jessica Ann Peavy’s highly amusing and introspective Note to Self: There’s a Hot Sauce Stain on My Gucci Bag. Pindell’s one screen doesn’t stand a chance against Peavy’s five screens – all already talking over each other.  Why not put either of these artists next to quieter pieces? Zoe Charlton ’s Dead White Men speaks for itself. In it, Charlton delicately questions her role in art by assuming various poses from the paintings of famous dead white male artists. Xaviera Simmons’s Landscape: Beach (density) uses subtle humor to explore the landscape painting tradition through the eyes of an African American female. As Simmons puts on her mask, (full body paint and an afro) the beachscape stays generic beside her. Either of these would have been more appropriate choices to help highlight other, more voice-driven work. Unless the show is ultimately making the argument that these women are still struggling to be heard, which I’m not convinced is the case, it might not have been such a bad idea to invest in some headphones.

Tucked away in a nook that looked more like a play-place to drop off the kiddies than anything else, two computer pieces — Dawn at My Back: Memoir of a Black Texas Upbringing by Carroll Parrott Blue and All Power by Colette Gaiter (in collaboration with Jeanine Mellinger) — fought to engage with the rest of the show. Like many artists in the show, Blue’s piece pulls from her own life experiences to document race in this country, while Gaiter’s interactive piece works with nonlinear narration to explore the life of Black Panther Emory Douglas. In addition, sound issues here are a clear problem, especially when the two pieces are being played simultaneously (something that is bound to happen if you hit the show at a busy time), thus completely drowning each other out.

That said, there are some strong works that are well-sited.

Adrian Piper’s celebrated video, which comes complete with a table on its side and chairs lined up like bowling pins facing it, must be, as the title suggests, Cornered. The piece, set up like a classroom with Piper as the teacher, is given adequate room for her to stretch out and give her thoughts on race. As she begins to poke and prod at your own race issues, one might wish that the classroom chairs were replaced with Freud’s leather chaise lounge in order to really figure out what’s behind those feelings. 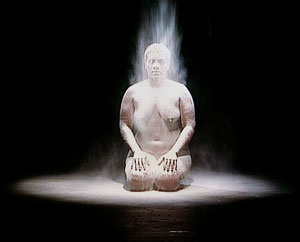 You can hear the sounds of Berni Searle’s meditative piece, Snow White, as you creep into the back corner that houses her work. Two views are presented; one at eye level and one from above, asking you to decide how you look at this artist as she critiques race and women’s labor issues. Searle is covered in a flurry of flour as the two images, timed just seconds off from each another, speak to each other. The flour begins to obscure her; she waits for a moment, then shakes off her ghost-like image, and takes control of the situation by using water that is poured from above to create dough.

The other area I thought pieces shone was the corner that held Paula Wilson’s vibrant hybrid piece, Turf, which encompasses everything from inks to oils to woodblocks, putting  a new spin on landscape, and Stephanie Dinkin’s video-in-a-box, Configured to Infinity, Reconfigure, Stop. With almost no down time from the onslaught of voices and visuals, this spot provides viewers with a much-needed screen-break. Then onto the next!

In a show with so much going on, it’s easy to walk straight past subtler pieces such as Lauren Woods’ voyeuristic break dancing video, (S)Port of San Francisco. This piece examines street performers through a sociological lens, turning the camera on the people watching, rather than the performers themselves. Through the onlookers, Woods is able to convey envy, lust and even at points the objectification of these male dancers. Without taking the time to read the panel outside the hallway, one might overlook this piece because of its quiet feel in favor of checking out what might be screaming in the next room. Or the one after that.

One piece that should have no trouble drawing in viewers is Lauren Kelley’s Big Gurl. The surreal video of frantic Barbie dolls doing everything from frying chicken to getting abortions is narrated by Kelley’s monotone voice and adds a touch of campiness to the exhibition, while still getting across powerful messages about race and sexuality in today’s society.

Curators should be applauded for having the impulse to include all of these voices in this exhibition — this is clearly a step in the right direction when it comes to paying tribute to the work of African American female video artists. Often times, however, good intentions get in the way of realistic situations, and although it is wonderful to see this work surveyed, in this case it might have been better to start smaller and plan for a sequel.

Sophie Rosenblum is a Houston-based freelance writer and the 2008 – 2009 Parks Fellow at Rice University.