Gary Komarin at Gremillion and Co. 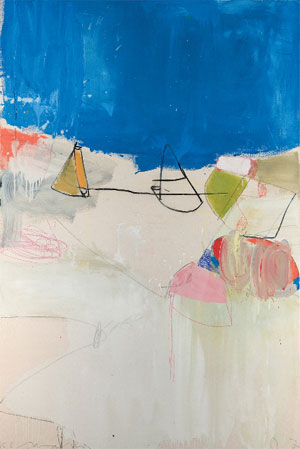 An interesting work of art can do many things. First and foremost, it can reveal a secret about the world in a way that is both fresh and stimulating, creating a sort of cathartic bond between the artist and viewer. This bond is what defines good art. When this bond is absent but the work still maintains a visual interest, the blowback can be brutal. A visceral betrayal of trust becomes tangible in the gallery and one walks away from such a show damaged.

Unfortunately, Gary Komarin’s work at Gremillion presents such a scenario. His paintings are heralded mostly because of his having been a student of Philip Guston, perhaps the most beloved painter (by painters) of the twentieth century. Komarin’s paintings attempt to follow suit; they are fairly big, they play with colors in a way that harkens back to the days of ab-ex yore, and they do contain moments of playful, formal banter. They absolutely stop there, though. They are not bad paintings, but there is nothing particularly good about them, either. The ballsy trajectory of Guston’s multi-faceted career is nowhere in this work, either. Rather, Komarin’s conceit is to tack on pithy titles to non-objective paintings with pretty colors and expect an interest to be developed in the work. This is not a new approach, nor one that is necessarily doomed to fail, but when endeavored with such bland and lightweight vigor, the paintings only cause distress for those expecting a Guston protégé. 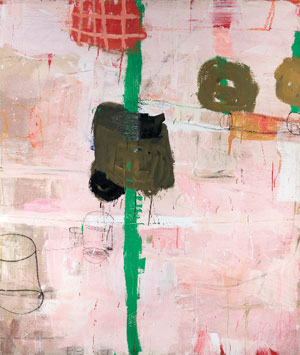 Gary Komarin...Now that I have Your Face by Heart...Mixed Media on Canvas, 71

In Now That I have Your Face by Heart, for instance, Komarin presents a loosely scripted drama of pastel tones that could resemble a single flower flanked by blobs of color amidst a flesh-tinted color field.  Is one supposed to piece together some sort of tragic legacy of romance in such a composition? The ham-fisted sentiment practically slaps the gallery floor as it quickly fades from memory. Komarin was likened to Jean-Michel Basquiat in some of the gallery’s verbiage. This pairing is almost as sacrosanct as the Guston reference. Basquiat’s language was that of the street; appropriated, to be sure, but heartfelt and war weathered beyond a doubt. To mimic that artist’s gesture and claim a brotherhood is just plain awful. Komarin’s paintings are mannerist efforts at saying something that seems to be little understood by the artist himself, and walking away from the show, one bemoans the loss of such greats as Guston and Basquiat in the wake of an imitative lightweight.