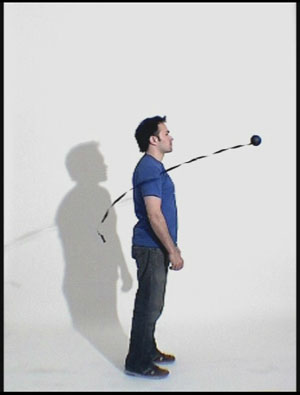 Even though the show’s title, Actions, is a clear reference to Joseph Beuys, John Cage came to mind when I visited William Lamson’s exhibit at Marty Walker Gallery. Lamson’s preference for playful yet carefully orchestrated interplay of chance operations and meticulously crafted systems evokes some of Cage’s aesthetic. An array of photos on one wall documents the artist’s amusing and understated aesthetic interventions in his natural and cultural surroundings: bananas are banded onto a tree trunk like the spike steps on a power pole, and a stack of wood pallets alternates with bulging, colorful balloons.

The highlight of the show is a video projection, also titled Actions (2007-2008), which documents 33 brief, simple events involving black balloons and their interactions with ribbons, sharp objects, pellet guns, arrows, spare wood devices and the artist himself. Each “action” involves Lamson’s setting up a carefully structured situation and then letting events unfold. Mostly things go badly for the balloons.

The projection’s aspect ratio is much taller than it is wide — a 90-degree shift from standard video proportions. Altering the frame like that foregrounds formal compositional qualities in many of the images and helps make pratfalls and murdering balloons curiously beautiful. That all the actions transpire in front of and above a white photographer’s sweep emphasizes the graphic qualities of the balloons and their shadows as they rise and descend in evolving pictorial designs. Random but frequently lovely compositions emerge as the characters and objects play out their open-ended scripts. Improvisational theater and jazz come to mind.

A buoyant balloon on a ribbon tether descends as a toy helicopter rises and pulls the ribbon through an off-screen loop. The rotor pops the balloon and its remains fall.

A cluster of balloons — half filled with helium and half with ordinary air — floats upward between two basket-like wood forms. When the cluster meets a small fan at the top, a helium balloon pops and the group drifts down till a fan at the bottom destroys a non-buoyant balloon and they rise again.  This continues until all are gone. (Actually one floating balloon escapes its fate.  Such is chance.)

The artist climbs a homemade wooden ladder with bungee cords at the top. He knocks loose a supporting brace so he falls forward and pops a balloon on the floor with his head.

The arc of that descent repeats in another action: he stands atop a ladder with a set of balloons on a string describing a half parabolic arc before and below him. He carefully tosses a dart so that the arc of its descent passes through and destroys them all. 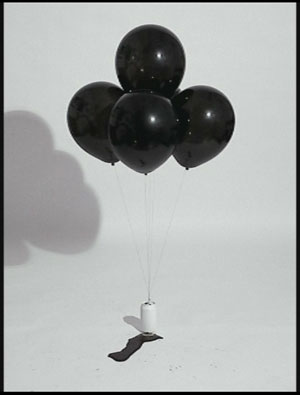 This last “action” invites examination. On the surface Lamson has merely documented the physics of mass, momentum and gravitational acceleration in a particularly entertaining way. Watch Mr. Wizard, that is. But the curve of the tethering string was determined by several factors, including its length, the distance between its termination points and especially the upward pull of his lighter-than-air targets. His dart falls through objects trying to rise up.  The tension between rising and falling appears in the structure of a good portion of his project. The metaphor of ascent and material failure invites comparisons with some very emotionally charged works in the modern art canon. Anselm Kiefer’s big, lead-winged book in the Modern Art Museum of Fort Worth would seem relevant, not because of anything close to visual similarity — and certainly not because of any emotional equivalence — but because of a tragic impetus to transcend that acknowledges its certain failure already at the start of things. The upward tug of floating balloons is complicit in their efficient extermination.

References to the art canon are sometimes quite direct in this work. In one of several pieces which involve attacking balloons, Lamson shoots them from off-camera as they rise in the frame. The projectiles trail black ribbons that embed in the wall and cut diagonally across the picture plane. As they accumulate and more balloons die, it becomes apparent that he is drawing. The Russian modernist Mikhail Larionov spoke of his Rayonist paintings as representing lines of cosmic force in the early days of abstraction. (Ever notice how much the discourse surrounding abstraction appeals to the concept of representation?) But Lamson’s diagonals really are lines of force. They don’t represent. You can see the forces that drew them. 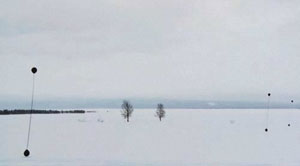 In two “actions,” Lamson turns his weapons against aluminum drink cans to more visceral effects. In one he shoots a can filled with ink and tied to a number of helium balloons.  The can bleeds out and loses mass and eventually ascends, the last of its contents dripping on the floor.  In the second, a stack of black cans supports two cinder blocks. The cans telescope under the blocks’ weight as he peppers them with pellets one at a time. The reference to the destruction of New York’s twin towers on 9/11 is just about inescapable.

Running almost 25 minutes but describing 33 events, Actions is paced quickly. Many segments last only a few seconds. Another video, Tundra (2008), clocks in just under four minutes, but its stately pace and the fact that there are no apparent edits make it feel much longer. Displayed on a flat screen in a small side gallery, Tundra shows a desolate snowscape with pairs of black balloons floating past from left to right.  Each pair consists of one helium balloon tied to another (non-floating) balloon whose weight holds it down. The non-buoyant ones touch the snow from time to time as the wind carries them away. It is a melancholy vision of desire and the hard facts of gravity. A soaring spirit may be desirable, but the weight of material being is never to be denied.