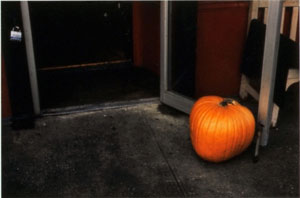 Detail from the Richard Wentworth series...Making Do and Getting By, 1995...Image courtesy of Lisson Gallery, London.

Uncommon Sense at TCU’s relatively new Fort Worth Contemporary Arts joins works by three artists who all explore and/or challenge the accuracy of archiving and documenting historical events, information and objects within society. Curator Gavin Morrison culls together artworks by Rebecca Baron, Tom Sachs and Richard Wentworth that collectively form a cohesive and thought-provoking curatorial premise, but that are also duly strong when encountered individually. While the gallery space is fairly limiting (er, small), Morrison successfully explores his topic with a few well-chosen works.

Visitors are first met with Richard Wentworth’s England 1997/Mexico 1998 and France 1997/Germany 1998 (both 1998) from Making Do and Getting By, his large and ongoing photographic series begun in the 1970s. Both works consist of two unique photographic prints depicting cropped, straightforward urban scenes incorporating quirky human interventions. For example, in France 1997/Germany 1998, the photograph on the left depicts a silverware tray labeling (in French) its various well-organized contents, while its counterpart illustrates a metal gate propped open with a shovelhead. The photographs are not formally striking, but rather hark back to the straightforward conceptual photography — of, say, Ed Ruscha’s Various Small Fires of 1964 —that archives and documents parallel, everyday occurrences.

Wentworth’s Making Do and Getting By is further represented in Uncommon Sense with France 1986/Barcelona 1988, France 1990/New York 1989 and Berlin 1993/Berlin 1994. Each work captures similar glimpses of human inventiveness, such as the use of a pumpkin as a doorstop. Also noteworthy here are that figures and the specificity of location are absent in the photographs, causing the viewer to not only question the truthfulness of the images and titles, but to hone in on what Wentworth is really documenting —analogous scenes of human ingenuity found within various locations without succinct cultural boundaries. Wentworth archives these scenes as global, collective phenomena.

Uncommon Sense also features Wentworth’s film Scrape/Scratch/Dig (2001), which pairs a clip of a cartographer marking and scraping off street lines to create a map for the street atlas “London A-Z” with footage of a construction crew removing and repainting pavement text with chalk lines and elegantly oozing paint. Occasionally the passage of an airplane creates a vapor trail. Ultimately, Scrape/Scratch/Dig exemplifies present-day society’s limited knowledge of urban environments due to our dependence on constructed systems to navigate through our surroundings. Wentworth groups these activities together, forming an archive (albeit small) demonstrating our tendency to systematize otherwise ambiguous, abstract contexts. What I also enjoy about this film is the beauty of each monotonous activity’s likeness to drawing. 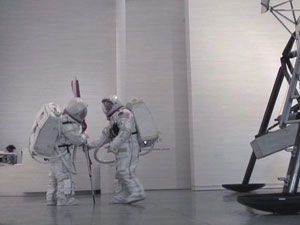 The two Tom Sachs pieces in the exhibition continue the overall theme, but when paired together also create a kind of documentary dialogue. Sachs’ RCS Losers (2007) is a clinical white foam-core case lit by a florescent tube containing various rejected models — done in his signature bricolage manner — all originally created for Sachs’ large and fabricated project/event, Space Program (2007). These failed models not only lend insight into the artist’s processes, but when shown as a group, also act to document Sachs’s project and failures. Presented as a collection of “losers,” the piece encourages viewers to contemplate the value of these botched material objects and the reasons behind recycling them to create another artwork.

The film Tom Sachs Space Program (2008), which captures Sachs’ comical 2007 performance at the Gagosian Gallery in LA, is shown adjacent to RCS Losers. In contrast to RCS Losers, Tom Sachs Space Program recreates a historical event — USA’s landing on the moon — which, of course, could never be accurate as a gallery performance, thus bringing into question the limitations of film and reconstructions. Sachs puts his stamp on the event further by including cigarettes and whisky as astronomical accoutrements, and broken pieces of the gallery floor as collected lunar samples. A live gallery audience watches the Mission Control Center’s monitors as the two astronauts successfully “land,” emerge from an intricately constructed spaceship and debark on the gallery floor and quickly claim the space with an American flag. Sachs captures the intricacy and theatricality of space travel, but at the same time displays how records of such episodes, whether the actual historical event or its reconstruction, are never really complete or precise. Tom Sachs Space Program shows the inaccuracy of historical documentation and diverges from RCS Losers’ seemingly authentic archive of a process and/or project. 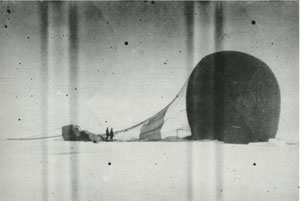 Uncommon Sense also features two works by a third artist, Rebecca Baron. Baron’s Preparing Youth for the 21st Century (2008) consists of an archaic-looking microfiche reader magnifying a piece of microfiche. According to the label, Baron found the microfiche in the street after it had been repeatedly run over. The images printed on the microfiche are fuzzy and indiscernible, and all that can be read is the inscription on the glass “preparing youth for the 21st century.” Obviously the esoteric technology of the microfiche didn’t quite make it into the 21st century that youth were to be prepared for. Too bad. Baron’s work, though, clearly demonstrates the limits of various technologies as archival tools and purveyors of information.

Baron’s 16 mm film Idea of the North (1995) also captures the inability of certain technologies to document and convey information. Baron found five photographs of Salomon August Andrée’s ill-fated 1897 Swedish expedition to reach the North Pole via a hydrogen balloon. All three of the explorers perished after the balloon crashed into arctic terrain, as the men were unprepared to withstand the environment. Idea of the North attempts to recreate Andrée’s voyage with extant photographs, constructed film footage and spoken narrative including entries from the men’s journals. The film aims to retell the mysterious journey rather linearly, ultimately showing how both the storyteller and viewer construct meaning. Like Preparing Youth for the 21st Century, Baron demonstrates the inaccuracy of technology — this time of photography specifically — to convey information, which poignantly contrasts Andrée’s faith in the technology of the hydrogen balloon.

Uncommon Sense reminds us of the fallibility of recollections and reconstructions – both human and technological.

Alison Hearst is an art historian and writer living in Fort Worth.

We, the RJP in Lubbock, recently had a debate over the narcissism in art and the process of being taught to be narcissistic. The deeply personal artist statements paired with the personal ‘mythos’ of each artist makes me ask why I should care. It is clearly about them, not me. (how narcissitic is that?) I suppose I want them to tell me something that will impact my life on a scale larger that idiosyncratic trivia about them.
The counter to all that is I can only produce according to what I think, so more importantly, where are my thoughts? Self discovery or world observation? And this could go on and on…
Really appreciated the article.