“Sterne and Steinberg: Critics Within” at the Menil Collection 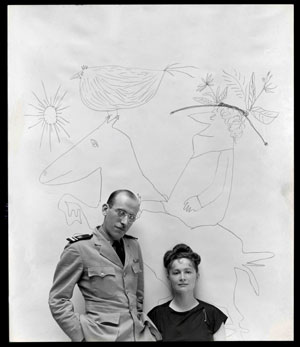 When you first walk through Sterne and Steinberg: Critics Within, curated by Sarah L. Eckhardt and currently on view at the Menil Collection, it may not be obvious why artists Hedda Sterne and Saul Steinberg are paired up. Granted, they were married from 1944 to 1960 and remained close friends until Steinberg’s death; true, too, that they were both born in Romania and in 1943 were forced to emigrate to the U.S. after the Nazi occupation. They were also very involved with the group known as "The Irascibles" (later called abstract expressionists or the New York School), which included household names such as Pollock, de Kooning, Rothko, Motherwell and others; they frequently held dinners and salons and were considered an integral part of the scene.

Yet Sterne’s three canvases seem to have little to do with the crisp, punchy lines of Saul Steinberg’s drawings. The bold strokes of New York VIII (1954) are clearly indebted to Ab-Ex; Monument (1951) is equally indebted to Surrealism, and the earth tones and horizontal structure of Vorteal Ho Fortel (Vertical Horizontal) are almost an homage to Mark Rothko.

Hedda Sterne, now 97, was still making art until her stroke at the age of 95. Yet despite her anomalous membership in the Ab-Ex club (she’s the lone, elegantly dressed woman standing high above her male counterparts in a well-known 1951 Life magazine photograph by Nina Leen), her vast and varied output remains little-known. Only recently, through the Eckhardt-organized retrospective and concomitant Krannert Art Museum publication, Uninterrupted Flux: Hedda Sterne, do we begin to see what we have missed. Sterne never gained real recognition as an artist, though she had solo shows at Betty Parsons‘ gallery and was in more than 90 group shows with Pollock, Rothko and others. Though some attribute this to gender bias, others blame it on her wild inconsistency. She refused to stick to "one image," as her male peers encouraged her to. In response she replied, “I don’t paint logos.”

Saul Steinberg, in stark contrast, became hugely commercially successful with his clever cartoons, drawings and distinctive style. Perhaps his best known work, View of the World from 9th Avenue, appeared on the cover of The New Yorker magazine in 1976. It depicts an overhead view of Manhattan with buildings and bustling streets. Beyond the Hudson River lies the rest of America: a beige rectangle, with the occasional boulder, sprawled to the Pacific. It’s a popular poster, even for non-New Yorkers. I think I’ve seen it in every doctor’s office I’ve ever been in. The works featured in this show (drawings, with the occasional splash of watercolor), however, are of another sort. Here we see Steinberg’s visual wit addressing the personalities and artistic currents of the couple’s milieu. 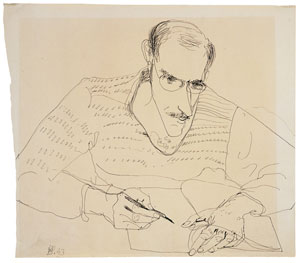 Parade, for example, presents several cartoon figures marching along, each carrying a flowery signature, an expressionistic swash of ink or color, or a precise handmade seal, holding them like a flag or a banner. Like Sterne, Steinberg critically views the procession of styles in his own way. One particularly lovely ink and watercolor work, Cocktail Party, depicts guests in different painting and drawing styles. One woman wears a dress of pretty pastel splotches; another, seated, is done in a careful stipple. Playful works such as these allow one to imagine what fun Sterne and Steinberg must have had choosing and rejecting what influences they would include in their works.

Also interesting in this exhibition is the pairing of Sterne and Steinberg’s portraits of each other and of the well-known artists, gallerists and critics in their circle. When the two artists portray the same person, as with their drawings of Harold Rosenberg, it is as if they are creating their own funhouse hall of mirrors. Sterne’s Rosenberg is gestural, while Steinberg’s is a clean caricature. The occasional portrait of Sterne reveals a softer, more fulsome side of Steinberg’s drawing, while Sterne’s drawings shift from expressionist to surrealist to cubist.

Both Sterne and Steinberg were critical of current movements and of their own places within them. Steinberg’s Self Capture, for instance, is a mordant depiction of the artist drawing himself into a box. Yet the show leaves us with a somewhat uneven sense of the characters behind that criticism. Perhaps this is because Sterne steadfastly refused to adopt a style, while Steinberg, no matter how many styles he put into play, never really abandoned his own. Or perhaps it is because Steinberg’s medium, drawing, dominates the show while Sterne’s main medium, painting, is represented by only the three canvases. Whatever the reason, we come away with a far stronger sense of Steinberg than of Sterne. 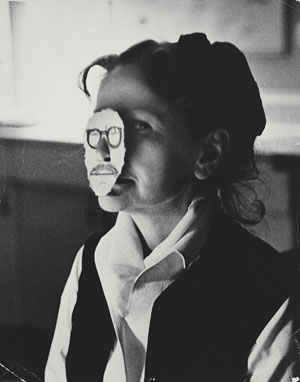 Because she rejected the idea of ego, we have a hard time understanding what Sterne was up to, but according to interviews, that’s just what she wished. It is instructive to consider this stance in light of current trends in the world of art: Sterne’s hopping from one medium or style to another would be right in fashion today. And of course Steinberg, the self-labeled "cartoonist," along with Chris Ware and others, would find himself gracing gallery walls without any question as to whether his work was fine, or merely graphic, art.

Sterne and Steinberg: Critics Within is a beautiful show, providing us with a glimpse of Sterne’s paintings and many lovely, sensitive drawings by both Hedda and Saul. Through this we gain insight into their world, the people in it, and their criticisms of it. An additional pleasure arises from the show’s Menil Collection setting: it becomes visually obvious that though they were steeped in American culture and abstract expressionism, both artists drew deeply from the surrealism of Breton, Matta, Ernst and Brauner—a strong tradition in their native Romania.

For this viewer, though, it is a pair of small black and white photographs of the two that captures the most telling thing about the lives and works of Hedda Sterne and Saul Steinberg, at least in the thematic context of this exhibition. In one, Saul stands over the seated Hedda before one of his large drawings. In another, Hedda playfully mugs for the camera wearing a tiny mask — a self-portrait drawn by Saul — perched on her nose. Hedda Sterne was talented, articulate and beautiful; she produced works for more than six decades and was well regarded by famous dealers and peers. Yet while Sterne and Steinberg: Critics Within provides an ample view of Steinberg’s trademark cleverness, I walk away wanting to know more about the woman behind the Steinberg mask. 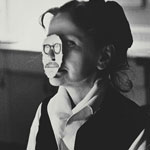