by Amanda Douberley May 21, 2008
FacebookTwitterEmail 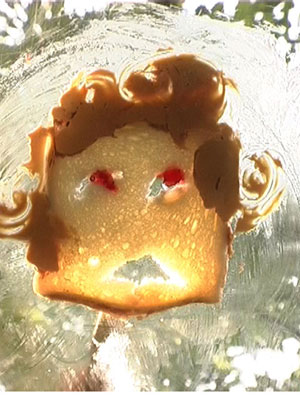 For the Fuse Box Collaboration Project, curators Ron Berry and Jade Walker set up artists on what amounted to a ten-day blind date. They paired five Austin-based artists with five artists who live in a different city and work in a different medium. The artists were asked to collaborate during the run of the Fuse Box Festival (April 24 – May 3) while competing for a $5,000 prize. Individual works by the participating artists were shown in the exhibition Double Reality at the Salvage Vanguard Theater. Their collaborative works were showcased in Double Fantasy at Big Medium. Now, $5,000 is a lot of money, and really no one can argue with the creation of a new prize for the arts. Still, the contest seemed less important than what happened during the ten days prior to the show.

Impresario and Texas native Ron Berry started Fuse Box four years ago. “I needed to engage with the rest of the world if I wanted to keep living in Austin,” he said. The festival has a growing reputation for innovative theater, dance, film and music; however, its relationship with the visual arts has been consistently ambivalent. In the past, Austin-based artists have created work to coincide with Fuse Box and the festival has included local exhibitions in its listings of official events. But the visual arts activity seemed more or less on the fringes of Fuse Box, with the performing arts taking center stage. So this year Berry partnered with Jade Walker, director of UT’s Creative Research Lab, to find a better way to integrate the visual arts into the festival.

Berry and Walker’s choice of a ten-day collaboration project as the solution to this problem made very little sense at first. While the performing arts have master classes and workshops, and architecture and design have charrettes, I cannot think of a model for this type of quick and dirty artmaking in studio art. A totally alien situation seems like a strange way to welcome the visual arts into the festival with open arms. Berry and Walker may be onto something, though; more visual artists applied to the open call than artists from any other discipline. 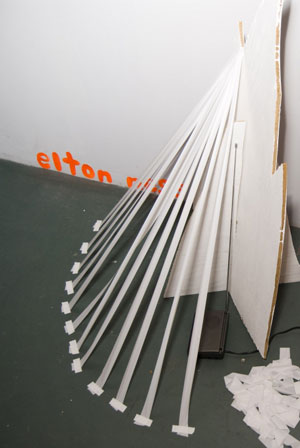 The call for entries went out in December, soliciting a slightly ridiculous laundry list of creative types, including chefs, mail artists and psychogeographers, as well as those who self-identify with more pedestrian artistic classifications (musicians, actors, painters, etc.). With around 30 responses, Berry and Walker narrowed the list down to ten. The curators made their first cut based on the work they found most striking. The second depended on how the short list could be configured into five pairs, with one half of each team based in Austin. In the end, the teams were: Lisa Choinacky (Austin) and Jake Borndal (New York); Lauren Tietz (Austin) and Armando Miguelez (Mexico City); Kirk Lynn (Austin) and Mary Magsamen/Stephan Hillerbrand (Houston); Terry Plumming (Austin/Chicago) and Jared Steffensen (Utah); Chris Cuellar (Austin) and Céline Foussadier (Paris).

Participants were provided with round-trip airfare, lodging and space to work. For Miguelez, a visual artist who exhibited in Austin last year at the now-defunct Volitant Gallery, the free return trip to Texas was reason enough to apply. Ditto for Borndal, an installation, sound and performance artist. Husband and wife video art team Magsamen and Hillerbrand saw the project as “a way to make something new that would hopefully change the way we look at our process.”

Each team was introduced early this spring and given the option to begin work as soon as they desired. Borndal and Choinacky engaged in a daily exchange of web links, images, text messages and faxes during the weeks leading up to Fuse Box, but did not start a conversation about what to make until they met in Austin.

Then, Choinacky says, “We had a hundred ideas a day…When we discovered common ground we ran with it. We went to Tops together, we dug through big trash day piles together. We built a visual language every step of the way.” According to Borndal, by the end of the week “we found that we had assembled some drawings, a video, a painting, sounds and some sculpture,” which the two artists made into a larger installation for Double Fantasy. 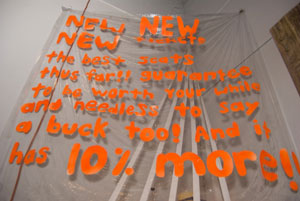 Part of the exhibition’s interest lay in the variety of approaches taken by artists to represent the collaborative process. Borndal and Choinacky told the story of their week together through art rather than straight documentation. It made for an engaging assemblage overall but the individual parts were essentially unintelligible private jokes. For example, it turns out that the ridiculous advertisement printed on a shower curtain came from a text message Borndal received during the week. A wall drawing originated with a piece of wood that Choinacky cut out early in the week and that Borndal later traced. A painting showed Choinacky’s interpretation of another artwork as Borndal had described it to her. But even if the details were lost, viewers definitely got the impression that these two artists had a lot of fun.

In contrast with Borndal and Choinacky’s assemblage, Magsamen, Hillerbrand and playwright Kirk Lynn focused their attention during the week on creating a discrete work of art. The group started out with a spoof on “Survivor.”

“The next day we spent videotaping it,” say Magsamen and Hillerbrand, “and it was a disaster! It was so flat and not funny and we were stiff and uninteresting. We went back to talking and trying to flush out our ideas and then ended up with a video project about peanut butter and jelly sandwiches.” In the video, sandwiches on glass were eaten bobbing-for-apples style, with an open mouth cutting holes in the bread. A soothing voiceover repeated statements about peanut butter and jelly, weaving a fanciful story that sounded like a dream.

According to Magsamen and Hillerbrand, “throughout the whole process we thought about why and how we were matched up. If a writer and video artists were teamed up, what should we be thinking about? Text versus image? That really resonated with us and also challenged us a lot.”

Choreographer Lauren Tietz thinks she and Miguelez were paired “because in a sense Armando and I both work with space and time as our mediums, though very differently.” Tietz and Miguelez began the week with intensive brainstorming in an effort to become more familiar with each other’s approach to the creative process.

Miguelez says, “It became apparent that not only our mediums were different, but also the way we work.” The pair decided to scout locations around Austin for their project, eventually agreeing to build a pool as the set for a dance piece at Big Medium. 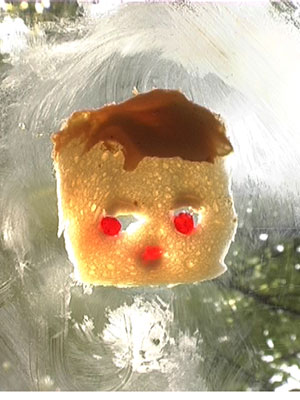 The dance included several absurdist vignettes, with Tietz and two other female dancers performing. At the outset Tietz described the show as a series of sketches, which were entertaining enough to warrant further development. First, they chased each other around the pool. Then one dancer played dead in the water and the other two women wrapped her in a shroud. The wet sheet became an object of play in the most visually interesting part of the show. Next, the trio shared a pot of tea poured by Miguelez, first for the dancers and then audience members. Finally, Tietz brought out a dead fish that the dancers coddled like a newborn baby.

Miguelez says he wishes Fuse Box had provided some support in documenting the process that led up to the performance, “because in many ways the final result did not reflect the degree of collaboration.” Although he appeared in the dance Tietz produced, how he contributed to the performance beyond that was invisible. Miguelez made up for this fact by creating an installation of photographs, video, and drawings documenting his week with Tietz. At first, I thought his presentation of documentation was beside the point: Do we really need to see the whole iceberg? Did he have to make sure everyone could understand all of the work that went into the performance?

In this case, however, it may be that documentation really was the point. All five entries were juried immediately following Double Fantasy by former Glasstire editor Rachel Cook and independent filmmaker Spencer Parsons. The $5,000 prize went to Magsamen, Hillerbrand and Lynn, who plan on working together in the future, although the prize is not restricted to supporting another collaboration. It is debatable how artistic process-or success in collaboration–can be evaluated. The prize money would have been better spent in supporting all five collaborations as they unfolded in Austin, an opinion echoed by almost all of the collaboration project’s participants. Still, while a few kinks remain to be ironed out, the visual arts may have finally found a home at Fuse Box.

Amanda Douberley is a doctoral candidate in Art History at the University of Texas at Austin.