by Garland Fielder May 7, 2008
FacebookTwitterEmail 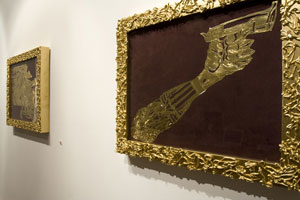 Depictions of adolescent angst can be powerful—think The Catcher in the Rye. But in the wrong hands, coming-of-age themed work can also drive a viewer insane with its self-absorbed musings. In Swan School; The Matriculation at Austin’s Art Palace, Ali Fitzgerald, a multi-media artist, creates a kind of manic female version of Holden Caulfield. The show is consistently personal, perverse and damned interesting.

A recent UT grad, Fitzgerald channels her art through an alter ego she calls “Sad Little White Girl.” She has been developing “Sad Little White Girl” for some time and she is getting plenty of mileage out of her. In this current manifestation of the character, the artist presents ten gold cutout collages in artist-made frames. The hokey frames are crusted with modeling paste squirted through an icing sleeve to make ornate designs. This method of creating pasty and loose decorative detail is a staple of Fitzgerald’s work. The cutouts themselves illustrate the narratives of titles such as Campfire blood pact, in which she is not included. and Dancing with her teacher, who also portends her death. These self conscious and melodramatic titles reflect the character’s exaggerated emotional level. Meanwhile the execution of the pieces is loose and very much DIY, exactly like you would expect from a misunderstood teenager. Despite the overall roughness of Fitzgerald’s aesthetic, there is a painful care in her execution of the work that makes it ring true. 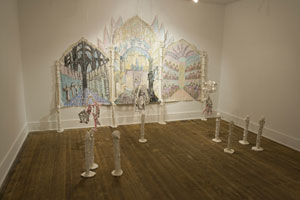 The titles get even more lengthy and convoluted in the next gallery, which contains Fitzgerald’s strongest work. Here, the site-specific installations continue the homespun aesthetic. They’re executed in pastel colors with modeling paste and draped canvas. These works are literally sickly sweet, drenched in the pretensions of a maladjusted young woman. Three Stations inside her school and home, with rotating and projecting visions of what’s to come and what has happened. hangs on the main wall. It has a triptych-like presence; the built-up modeling paste and paint are reminiscent of a birthday cake smeared against the wall by some unhappy, spoiled little girl. The titles of the installation are more descriptive than those of the collages and create additional narrative meat for viewers to sink their teeth into. The work’s content and execution plays into the artist’s adolescent posturing. 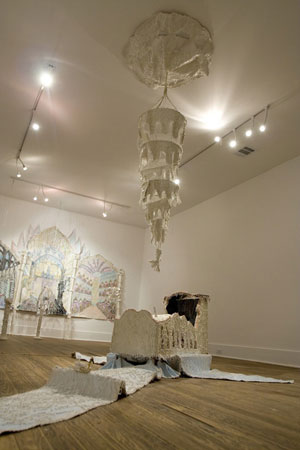 In the piece whose lengthy title begins with Not simple pleasures… the artist has assembled a long baby carriage/coffin amidst saccharine decorations. In the center of the bed rises a single synthetic dismembered finger. It is not so much pointing as merely present. A small progression of loosely assembled detritus pours out along the floor towards the corner of the space. It ends with an elegant wall drawing made from modeling paste and modestly placed near the floor. The whole thing mimics the awkward gait of adolescence.

Fitzgerald’s show reminds me of another teenage exploration recently on view in Dallas, Phil Collins’ The World Won’t Listen. In that stunning work, Collins filmed a number of youths from around the world all singing karaoke to a Smiths album. The three-screened presentation of such heartfelt adoration was at once painful and heartwarming to watch. Fitzgerald’s work lives in a similar space, making use of the time in our lives when we feel the most, understand the least and are convinced we have to put it all on the line.