J.M.W. Turner at the Dallas Museum of Art

by John Devine May 2, 2008
FacebookTwitterEmail 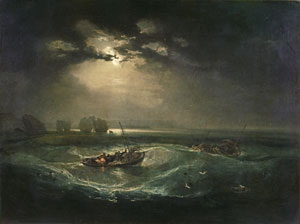 Some might think the J.M.W. Turner retrospective is too much of a good thing. Organized by the National Gallery of Art in Washington, the Metropolitan Museum of Art and the Dallas Museum of Art, where it is currently on view, the show includes approximately 140 paintings and watercolors, ranging through several galleries. While some of the rooms with Turner’s large-scale works can feel a bit crowded, the show as a whole is an embarrassment of riches.

And rich it is indeed. Turner was a masterful colorist, an inventive formal composer and a consummate Romantic. He is best known today for his large atmospheric canvases, but his contemporaries prized his watercolors. (To anyone more familiar with the paintings, the watercolors in this exhibit are a revelation). He was a visionary who almost single-handedly elevated landscape painting, considered by the academicians of his day as a theme for hobbyists, to the status of history painting; Turner sometimes even combined the two. Some see him as a predecessor of the Impressionists and even a prophet of abstraction, but he was not. His work is firmly grounded in the landscape traditions of Nicolas Poussin and Claude Lorrain, even as he recognized the changes that the Industrial Revolution and its technologies were bringing to England and the world.

Joseph Mallord William Turner was born in London in 1775 and baptized in May of that year. He knew tragedy early in his life. His younger sister, Helen, died when he was 11, and her death may have played a part in the increasingly precarious mental stability of his mother, who was finally admitted to St. Mary of Bethlehem Hospital, a.k.a Bedlam, in 1799. She died there five years later. As a consequence of his mother’s illness, Turner was very close to his father, a wigmaker who turned to barbering when wigs went out of fashion. (As Turner’s career advanced, his father gave up the barbershop to become his son’s business manager). His mother’s illness may explain why Turner was sent in 1785 to live with her brother in Brentford, a small town on the Thames west of London, an area with a history of radical politics. Turner had access to the countryside there and after living in urban London, the Middlesex countryside must have seemed positively Edenic. A year later, Turner was sent off to school in Margate on the Kentish coast. By this time, he was producing a prodigious number of drawings, which his father exhibited in the window of his barbershop.

Turner entered the Royal Academy of Art Schools (the only game in town at that time for the aspiring British artist) in 1789. He was accepted into the Academy the following year, after being interviewed by its president, Sir Joshua Reynolds. One of his watercolors was accepted for the Summer Exhibition that same year. In 1796, at the age of twenty-one, he exhibited his first oil painting and continued to exhibit with the Academy nearly every year after for the rest of his life. 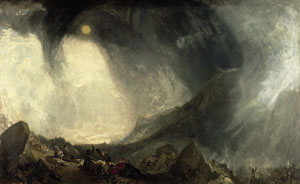 Snow Storm: Hannibal and his Army...Crossing the Alps, 1812

The exhibit is roughly chronological and Fishermen at Sea (1796) hangs in the first gallery. Demonstrating an astonishingly precocious observational intelligence, this was the first oil painting Turner exhibited at the Royal Academy. The moon’s light, encroached upon by some thinning clouds, touches the sea in the foreground, where our fishermen toil. Moonlight also highlights massive rocks in the middle distance. The fishermen maneuver their small boats though sea swells. Turner has rendered the sea with such an understanding of hydrodynamics that those susceptible to motion sickness would be advised to take some Dramamine before attending this show. (And this painting is just the first Turner set at sea.)

The artist’s understanding of how light works is already evident in the painting’s dramatic moonlight. Turner pools it in the calm distance and dissipates it in the middle distance because turbulent water doesn’t reflect as well as calm. He provides just enough luminosity to reveal the fishermen and their boat as they sort the day’s catch in feeble lamplight. The heaving swells make their sturdy boat seems inconsequential. It’s an astonishing debut for one so young.

In early February of 1802, at the unprecedentedly young age of twenty-six, Turner was invested as a full Royal Academician. The honor granted him entry into a very exclusive club and provided him with a highly prestigious marketplace in which to automatically display his work every year. In that same year, Britain and France signed a peace treaty ending nine years of war. Peace allowed Turner to travel to the continent for the first time. He spent the summer sketching in the Swiss Alps before stopping in Paris and spending some quality time in the Louvre on his way home to London. Depending on relations between England and the continent (principally France), Turner would later make trips to the Low Countries, Germany and several trips to Italy, as well as excursions to Copenhagen and Prague. 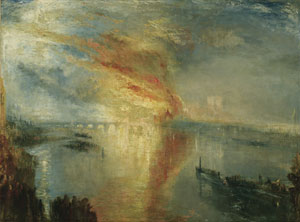 Ten years after his sojourn in the Swiss Alps, Turner painted one of his most atmospheric canvases, Snow Storm: Hannibal and his Army Crossing the Alps (1812). A cold sun glares through scrims of dark, swirling clouds. Crowded into the bottom quarter of the picture, figures engage in battle with one another. One of Hannibal’s elephants is barely discernable on the horizon. The catalog suggests that this painting may be based on Livy’s account of the skirmishes between the Carthaginian army and local tribes as Hannibal attempted to circumvent the rising power of Rome and strike it from behind.

This painting, produced when he was about thirty-seven, sums up many of Turner’s concerns and attitudes. Despite his rise to privilege as a Royal Academician and his familiarity with the gentry (he was a frequent guest at the country manors of several patrons), his political sympathies seemed to be with the people. But he is never a sentimentalist in his art. Those figures struggling in the darkened foreground are oblivious to the sublime grandeur surrounding them as they extinguish themselves in their petty squabbles.

Turner is best known to us for atmospheric paintings like Snow Storm and The Burning of the Houses of Lords and Commons (both 1834). Both works are included in the exhibition along with a roomful of small supporting oil sketches and watercolors. But Turner’s watercolors were his bread and butter. He produced them very quickly, using an assembly line approach and a technical procedure known as the “scale practice.”1 This practice exploits the inherent nature of watercolor as a transparent medium requiring the colorist to work from lightest to darkest tones. Turner would mix the lightest tone and lay it down at different locations on the paper. Moving to the next paper, he would repeat the process; by the time he’d finished the last, the first one was dry. Turner would then do the same thing with each incrementally darker tone. This “scale practice” allowed him to easily produce large numbers of watercolors. 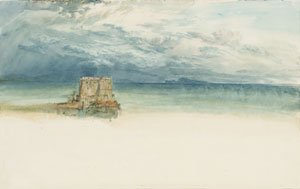 The exhibition does have its disappointments. Two of Turner’s most famous paintings, Rain, Steam, and Speed: The Great Western Railway (1844) and The Fighting Temeraire tugged to her Last Berth to be broken up (1838) did not make the trip; the former was deemed too fragile to travel, the latter too iconic (in a 2005 BBC poll, The Fighting Temeraire was selected by the public as Britain’s greatest painting). Both of these paintings marked the passing of an era, with the speeding train rendering abstract the landscape it passes through, while the sailing warship Temeraire is pulled by a steam-powered tug.

But Turner is never nostalgic – he welcomes the new day dawning. Nor is he mock-heroic; in his paintings of war scenes, here represented principally by depictions of the battles of Trafalgar and Waterloo, he focuses on the chaos of battle and the horror and devastation of its aftermath. For all his Romantic painterly effects, Turner has few illusions; his only god was the light that saturated his canvases. Turner died in 1851 and is interred in St. Paul’s Cathedral, in proximity to Sir Joshua Reynolds as he had requested. In the words of Turner scholar Eric Shanes, “he was the last of the Old Masters and the first of the Moderns.”

1 For these technical details and other aspects of this essay, I am indebted to Eric Shanes’ essay The Life and Art of J.M.W. Turner, RA. Mr. Shanes is himself a painter, as well as Chairman of The Turner Society.