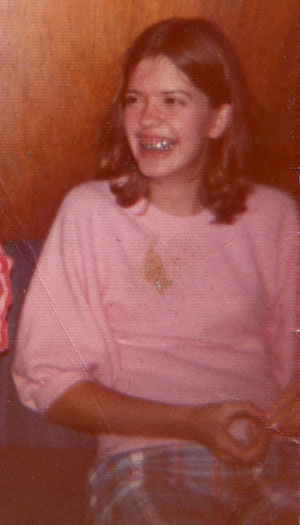 The beginning of obession. . .

I have made many bad pieces of art in my lifetime, and so it is difficult to decide which of those artworks truly deserves to be called The Worst Piece of Art I Ever Made. Since I can’t make up my mind, I have decided to concentrate on a few select pieces from two early, particularly bad series that I created, both of which concern mythology and both of which I was obsessed about for far too long.

Myth Number One: The Myth of Persephone (1972-1983)
When I was a senior in high school I became obsessed with the myth of Persephone. Since the myth of Persephone is in part a tale of death and resurrection, my obsession stemmed from a near death experience I had when I was three years old. In 1959 I came down with the Asian Flu, nearly died, went into a semi-comatose state and finally came to, with a distinct memory of walking up an underground spiral lined with millions of dead bodies (which, by the way, I told my mother I had killed – the bodies, not the spiral). I loved the Persephone myth – how she tried to pick a poppy and was pulled underground by Hades; how her mother Demeter searched for her daughter, and while doing so, how the earth became cold and all of the plants began to die.

My first Myth of Persephone was done in pastel on a 16 in. x 20 in. canvas board. About the time I decided to make this piece, my sister showed me a book of illustrations by her favorite artist. I forget his name, but he did covers of romance novels that featured buff shirtless men and women bursting out of their bodices. My plagiarism of his style was blatant. Hades had flowing hair, glistening pecks, and a raging fire burning all around his body. Somewhere around him was a lightening bolt or two. Right in front of him knelt Persephone, who looked like she was getting ready to perform something that he would really like and that I hadn’t had the pleasure of participating in yet, seeing as though I was still a virgin.

Despite the less-than-subtle “sensuality,” I wasn’t satisfied with the piece. I felt like I hadn’t truly captured the essence of the myth, or even the near-death experience. I hid it behind a dollhouse in my parents’ basement where it still sits today. I have never admitted this before, but at least once a year until I was 27 I made another stab at the subject, seriously trying to get it right. With the exception of one particularly nice etching, each subsequent piece was increasingly sillier, but not in the way you would like. 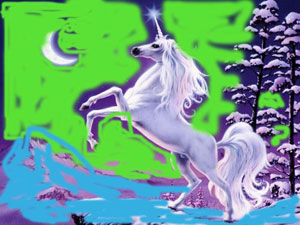 A little before I became obsessed with the Myth of Persephone, I had become equally if not more obsessed with the Myth of the Unicorn. Initially, I sated my need by merely embroidering small unicorns on the backs of my shirts, but like any other drug my need for unicorn imagery became stronger and stronger with each passing day. The first unicorn paintings I did were in the 11th or 12th grade. I made two, one of which was a portrait and the other of which was something that I felt at the time had never been attempted by anyone on the face of the earth – a painting of a unicorn standing on blue grass underneath a green sky. What a groundbreaker! I think one day people will look on my Reverse Grounds Unicornism in the same light that they see Rauschenberg’s first combines or Picasso’s precursor to Cubism in his famous portrait of Gertrude Stein.

From paintings, I had to move on to something bigger. The summer after high school I worked with my sister and brother-in-law at a Pizza Hut in Houston. When I wasn’t at work or going to Pizza Hut waitress school or babysitting for my three-year-old niece or going out with a guy named Cleo Whitlock, I was busy designing my own restaurant, which I was going to call (originally enough) “The Unicorn.” This restaurant was going to be amazing – I was going to design the entire place, exterior and interior, as well as cook all the food. But as far as I ever got on the design was the stained glass window in the front door, which I drew over and over again obsessively and which, by the way, as you may have guessed was the head of a unicorn.

Once college started, I quit drawing unicorns for a while because I was too busy preparing for the Nuclear Holocaust. That summer, my sister and brother-in-law and I had become involved with a group of Italian survivalists/Pizza Hut managers named the Fragionis, who had convinced us all that the end of the world was coming and that the only way to survive it was to give our money to a gun runner, pack our bags and move to a communal cave located next to a running stream in Idaho. According to the Fragionis, this was our best bet for survival, since nuclear rays were known to bounce off the tops of the mountains and wash away in the currents of the running streams. The guns were meant to scare off and kill other survivalists who were trying to steal our provisions, but we never got those guns since the gun runner took off and stole all our money.

I was hesitant about starting college since the world was going to end and what good would a college degree do me when we were all but dead? My sister and brother-in-law allayed my fears by reassuring me over and over that they would pick me up in October on their way to Idaho. I spent the next two months not going to classes, sleeping all day and not unpacking my clothes. Oh yes, and drinking. But the allotted time rolled around and they didn’t pick me up, and by the time I realized they had gone on without me, the world had not ended, but I wished it had since I had flunked out of nearly all my classes and my parents were going to kill me.

The next semester, with academic probation hanging over my head and my parents limiting my allowance to $5 a week, I buckled down at school and in my spare time resumed my unicorn obsession. For a while I actually made money embroidering unicorn patches for some woman in downtown College Station, until one day I took an advanced payment of $15 and then just never made the three patches in return.

In lecture class I doodled unicorn cartoons, and in ceramics I wasted my time making ugly little grey raku unicorns and sphinxes, and even a giant dragon that broke to pieces in the kiln. Finally, fueled by the grief of an affair gone sour with an uberdork named Leonard Moorehead, I decided to attempt my largest unicorn work of art to date, my unicorn piéce de résistance or should I say, piéce de merde – a really horrible unicorn mural that I painted on the wall next to my bed in my dorm room. This mural depicted a man, perhaps a knight, stabbing a unicorn in a rushing stream. (Perhaps the unicorn and the man were standing in the rushing stream in an attempt to avoid nuclear rays.) I think Leonard represented the unicorn, since right before we broke up he expressed interest in going out with my best friend. The mural was painted in a combination of the most non-contrasting colors possible (brown, dark blue, blackish green, and black), so that if you stood far enough back you could see nothing but a big mud pie mess, fortunate for all concerned. It was so terrible I don’t even know what to say about it. When I came back after summer vacation, the maintenance people had fortuitously painted over it. 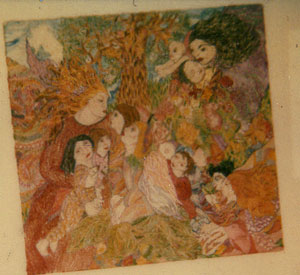 When my daughter Claudia went to college, she too became obsessed with unicorns, but in a much more ironic way. She asked me if I would give her the unicorn paintings that I made in the 11th and 12th grade and I agreed, first giving her the portrait and then the reverse ground unicornism painting as a gift for one of her birthdays. Alas, not all are as appreciative of great art. The day I brought her the groundbreaking painting, she and I sat on the floor of her dorm room admiring it. Her friend Natalie came over, bringing with her a little dachshund named Penny. Penny took one sniff at the reverse ground unicorn painting and, confusing it with a toilet (perhaps it was the blue grass that led her astray), promptly deposited two doodoo logs not only right in front of but partially on it, leading one to the conclusion that she didn’t know much about art, but she knew what she liked. Or something like that.

Beth Secor is a artist, writer, and monologist who thanks God everyday for making her too cynical and jaded to care about unicorns anymore. Her non-unicorn based artwork is carried by Inman Gallery.

All images courtesy of Beth Secor.

It’s unfortunate that the only creature that God gives a shit about are those goddamned unicorns. It’s mystifying!