It’s the only sculpture I’ve ever made and I made it in September 2001 in a beginning sculpture class when I was an undergrad at the University of North Texas. A week before I finished it I was in my car driving to Home Depot to buy some paint when I heard on the radio that airplanes had crashed into the World Trade Center. I had forgotten my cell phone that morning so I pulled into a gas station and called my then-girlfriend to ask if she was watching the TV. I turned around and went home. I didn’t make it to Home Depot or to class that day.

Two years before that I was in a dorm room eating a Hot Pocket when my mom called me and told me that my father had died of cardiac arrest on a job site. Three weeks later when I went back to school the Hot Pocket was still on my desk, fused to the paper plate. My dad was cremated and some of the ashes were buried while the rest were given to my mom, my sisters, and me to scatter somewhere. The ashes were given to us in a plastic bag, which was placed in a black, plastic box. For the next two years I put all of my anger, my fear, and my sadness into that black box. I made drawings of it. I would lay it on a piece of paper, trace its outline and paint the shape black. I made hundreds of these drawings. I nailed the box to a wall. I glued it to a painting. None of the things I did with it either satisfied me or resulted in good art. I yelled at it, I cried at it and I threw it across the room more than a few times. It defeated me at every turn. It was completely impenetrable. I hated it like I had never hated anything before in my life and I slept with it on a desk next to my bed.

Making an image of it wasn’t doing anything. The address and phone number of the company that manufactured the box was printed on its underside and I thought that if I ordered a hundred of them it would make my box less powerful and reduce it to the manufactured, assembly-line piece of junk that it was. This turned out to be beyond my budget. I couldn’t even afford to order two of them. I finally decided that the only way I would be able to beat the box would be to make it again. Not to make a representation or an approximation of it, but to actually recreate it in every detail. The next semester I enrolled in a beginning sculpture class solely for the purpose of figuring out how to cast and remake the box. I endured over a month of learning how to cast a piece of plastic fruit and making clay maquettes of simple forms, always with the dream of walking out of that class with another black box to show my black box how unimportant it really was. Finally, the class was told that our next project could be whatever we wanted it to be. I was excited.

The instructor had no idea how to teach me to cast a hollow form in plastic. I had discussed this idea with him over and over again and each time he told me it would be no problem and when the time came he would help me and I would have my box. First he told me to coat the box in a toxic plastic substance, which I would then be able to peel away and use as a form for casting. This failed miserably and even if it had worked it would have only yielded a solid form of the box. I spent days removing the plastic gunk with acetone. The due date for the project was fast approaching and I had nothing. My dream of defeating the box was slowly dissolving and I had pretty much failed every other project in the class, so in addition to being defeated by the box again I was probably going to fail beginning sculpture.

One day I was driving with my girlfriend through Denton on the way to one of her friend’s stupid Hare Krishna parties when I saw a little sawed-off stump sitting on the corner next to some branches and a bunch of trash. I pulled over and we struggled to get it into the trunk. I didn’t really know what I might do with it but I thought I could make a mini-Baselitz
sculpture for my final project. I took the stump to class that week, nailed it to a table in the sculpture studio and went to the tool room. I felt like Bruce Willis in Pulp Fiction when he’s looking for a weapon to save Ving Rhames with. The saw looked good. There were some impressive chisels. But then I saw the electric chainsaw and I knew that would be the thing. I checked out the chainsaw and a couple of big chisels and went back to my stump. Without thinking too much I cut the stump into a rough rectangle and sheared off all the bark with the chisels. The next morning I got in my car and headed to Home Depot to buy some black paint to cover it with but I didn’t make it there that day. 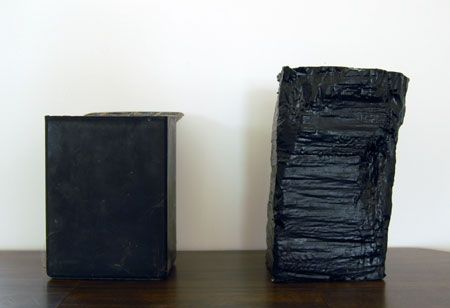 For the crit I placed the real box next to my box, recounted the whole sad story, almost cried, and for the first time felt like I could put it all away for awhile.

Michael Bise’s really good art is on view through November 24th, 2007 in “Birthday,” his solo exhibition at Moody Gallery.