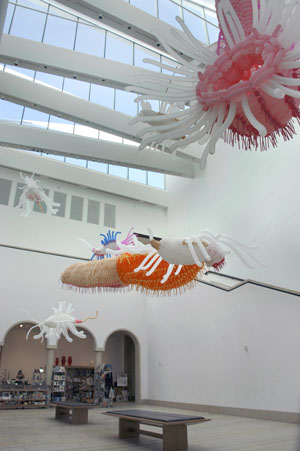 Balloons may not be the first things that come to mind when planning décor for a tony event, but they were an obvious choice for art collector Jeanne Klein. Klein commissioned seven balloon sculptures from artist Jason Hackenwerth for her son’s wedding rehearsal dinner. The balloons Hackenwerth uses for his sculptures are the same as those used by clowns at kids’ birthday parties, but in Hackenwerth’s hands they accumulate to become enormous artworks. The artist’s Goras and Polyandromites are far more ambitious and amazing than any balloon poodle.

Hackenworth’s otherworldly constructions require hundreds of balloons.
He swirls and curves them around each other, joins them in concentric
rings or weaves them together like the reeds of a basket. The
candy-colored results look like giant mutant bugs, jellyfish, or maybe protozoa
, sporting balloon antennae, tentacles, flagella and cilia. One work’s
underbelly was made from bunches of white balloons with black tips,
round bumps upon the larger body of the blown balloon; they looked like
tits or multiple phalli. Sexual connotations cannot be avoided: long
tubular balloons frequently arced out of the sculpture’s bodies.

The sculptures were dramatically lit and hung from the ceiling of San
Antonio’s International Room like chandeliers, wafting slightly in the
air and filling a space that, on any other occasion, appears cavernous.
The surreal sculptures gave the rehearsal dinner a racy edge; they
whispered everything that goes unspoken (by great aunts, grandparents,
doting fathers) in the general anticipation of marriage, consummation,
and honeymoon. A hot pink and white creature with a long phallic balloon jutting out of a pink-ringed orifice was hung low over the place card table. A relative requested that it be turned around.

Hackenwerth learned to work with balloons from his mother, who
performed as a clown and made balloon art when he was growing up. When
he moved to New York in 2003, Hackenwerth was a painter with an MFA
from Savannah College of Art and Design
. “But I came to and from my studio on the subway, where it was so
bleak,” he explained. So he installed hundreds of balloons at the
subway station one day, “bright orange bubbles that wiggled as the
trains went by.” He continued making subway installations (not without
some trouble from the law), enough to capture the attention of a Scope
London director, who saw his art and invited him to create an
installation for the contemporary art fair in 2004. “I went over and
did my installation, but then, while I was taking a nap, the hotel
staff took the whole thing down,” Hackenwerth shrugged. “So, I took the
few remaining balloons and made a sculpture, and I’ve been busy ever
since.” Sometimes, the balloon sculptures are incorporated into
performances, such as the one Hackenwerth plans for the upcoming Art Basel Miami Beach
. The Madonna Project will involve wearable sculptures used in a
choreographed dance that references the movements of exotic birds.

“This is my present to the kids,” explained Klein, who first saw Hackenwerth’s sculptures in 2006 at the New Museum
Gala in New York. “I was receiving an award,” she explained, “and when
I got to the podium I looked up and saw the balloons and I completely
lost my train of thought.” After the dinner, Hackenwerth carefully
loaded his pieces into a 16-foot truck and drove them to Austin, where
Klein had arranged for them to be installed at the Blanton Museum for three weeks.