As a visual language, abstraction can be as predictable as it is
iconic. Depending on your take, the results either seduce with their
meditative surface or bore you to tears. In that regard, the genre acts
as a Rorschach blot, revealing more about the viewer’s attitude toward
art than about the success of the piece. If you are of the camp that
places value on such aesthetic grappling, the works of Emily Joyce and
Robert Ruello at Inman Gallery in Houston will be worth a visit. If it
is all just so much blather, don’t bother. The work on display will
only prove indistinguishable from others of the genre. 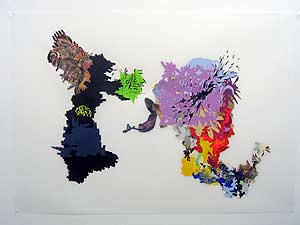 LA-based artist Emily Joyce presents a series simply titled New Works, which is the more interesting of the two exhibitions, if only for her unique application of materials. The surface presents an interesting hybrid of clean, graphic-like references with interspersed tattoo imagery collaged in and out of the compositions. It recalls the work of Julie Mehretu, only these are less epic and more whimsical. Joyce’s vinyl collages on Mylar (or other backdrop material) convey a personal space in spite of the dominant formalism. Botanical silhouettes in bright fluorescent oranges and yellows weave in and about other vinyl hashings that are used to mask out much of the built-up imagery. The odd, off-center placement of the diagrams works to the artist’s benefit, allowing for breathing room in the composition. The space-demanding works are dense and complicated. The vinyl is often overlapped, bringing an almost painterly quality to the pictures. This, too, is a strategy not usually associated with these materials. 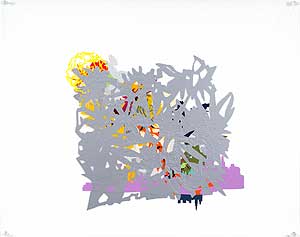 But it is the artist’s juxtaposition of tattoo imagery that really retains the viewer’s interest. The illustrations (mostly animal tattoos) are decipherable to a point, with fleshy skin apparent here and there, and it is just weird enough to demand further inspection. Laconic titles like Dreamland and Moonstone add to the intrigue. In some, pot leaves are silhouetted amid swooping larks in a jumble of organic forms mixed with patterned wanderings, giving the works a sort of stoned feel. This is deceptive, though, in that the execution (done on a plotter for the most part) is effortlessly precise. This precision, however, lurks in the background, only becoming evident when a flaw is revealed. It is a tough trick to pull off — this coupling of tight, formal abstraction and personal iconography — and Joyce does a good job of commingling the two. 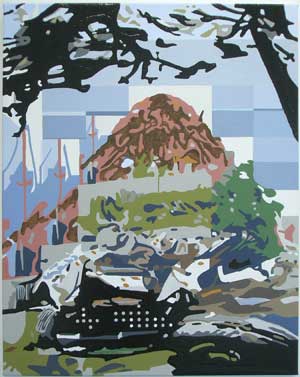 In the North Gallery, Robert Ruello presents Afterwards, works that take a similar sort of approach to abstraction, but with less seductive results. Like Joyce’s work, his paintings systemically parse their chosen imagery to create a hybrid environment. His acrylic canvases, however, lack a certain freshness. The at times haphazard application undercuts their rigorous study of a quasi-naïve sensibility. The paintings depict a distorted future land, one peopled with geometric slicings as well as glossy black droplets, in a palette of earthy browns with tints of aqua. In Mound, one can almost tease out a narrative recounting some sort of human interaction with nature in the face of a monumental edifice, but somehow the effort becomes too much and attention wanes. Ruello’s paintings are not bad paintings, but they are demanding in a way that simply is not as interesting as they could be.

Artists working in abstraction will obviously never go away, just as the attempt to read content into a nonobjective image will never cease. Keeping the genre relevant and imbued with a personal flair beyond the zeitgeist takes real ambition, talent and drive. Even if the arrow wavers a bit, Joyce and Ruello are hitting the target.

Garland Fiedler is an artist/writer living in Houston. 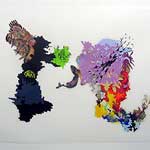