The Menil Collection is marking its 20th anniversary with A Modern Patronage: de Menil Gifts to American and European Museums, an exhibit that mixes works from the Menil’s holdings with works that have been “called home,” as it were. 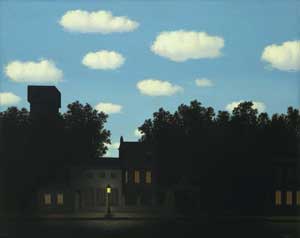 Actually, as in the case of one of the more noteworthy pieces in the exhibit (more about that later), most of these artworks never joined the de Menils’ collection. John and Dominique de Menil acquired them expressly for the purpose of donating them to their present venues, museums they felt especially close to: the Museum of Fine Arts, Houston (MFAH); The Museum of Modern Art (MoMA) in New York; the Musée du Quay Branley (formerly the Musée de l’Homme) in Paris; and, after John’s death in 1973, the Centre Georges Pompidou, Musée National d’Art Moderne, also in Paris. Some of the donations reflected particular enthusiasms of the de Menils, while some were made to help the institutions build their collections in areas where they needed strengthening. Either way, A Modern Patronage offers intriguing insights into the de Menils’ vision, for their own collection and as patrons.

Two of the earliest artists the de Menils championed occupy the first room of the exhibit: the surrealists Max Ernst and René Magritte. The de Menils organized Ernst’s first solo exhibition in the United States in 1952 at the Contemporary Arts Association in Houston — the same year they saw the original plaster of Ernst’s The King Playing with the Queen (1944; cast 1954) in Robert Motherwell’s Long Island studio and commissioned nine bronze castings of the sculpture. Of the nine, the de Menils kept the second for themselves, gave the first to Motherwell (the plaster having been lost in the casting process) and, presumably, the third to MoMA. The statue portrays a yard-tall horned figure seated at a low chessboard with one hand behind his back, the other curled protectively before the tall figure of the queen on the board, but the obvious chess reference does nothing to discharge the surrealistic double- (even triple-) entendre of the title. An amusing photograph among the documents displayed just outside the gallery shows the plaster King seen from behind in the back seat of a convertible, as though waiting for his chauffeur to come and drive him off to the foundry. 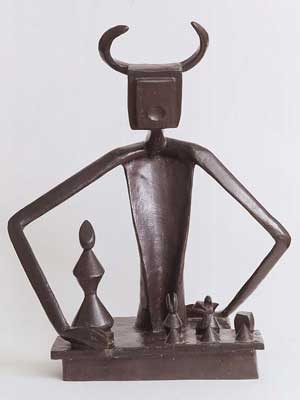 Magritte dominates the first gallery with paintings from both the Menil and MoMA. Apparently, Alfred H. Barr Jr., the museum’s founding director, was not very keen on Magritte and demurred when John de Menil offered in 1949 to donate to MoMA Barr’s choice of one of three paintings from Magritte’s New York dealer. In late 1950, however, Barr selected L’Empire des Lumières II (The Empire of Light II) (1950), which was to become one of Magritte’s most famous images: a glowing streetlamp and lighted house windows illuminating a nighttime street under a blue midday sky. In 1954 the de Menils acquired their own L’Empire des Lumières, now translated as The Dominion of Light (don’t ask), and they hang side by side in A Modern Patronage. The Menil’s vertically oriented painting is the stronger composition of the two. The compressed space makes for a more dreamlike intensity, and the darkness surrounding the streetlamp (abetted by a sole lighted window rather than half a dozen) emphasizes the midday light of the sky, filled with clouds much less regular in shape than in MoMA’s painting, and so more naturalistic, intensifying the contrast. That the streetlamp and the window are reflected in water below them, perhaps a canal, brings a nice element of fluidity to this day-for-night mise-en-scène. 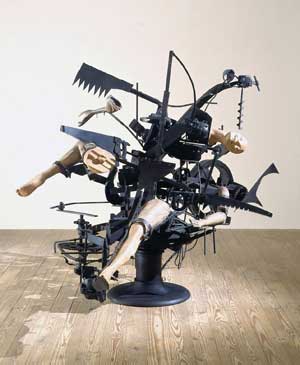 Three artists featured in this exhibit emphatically testify to John and Dominique de Menil’s vision as appreciators, collectors and patrons: Jean Tinguely, Lee Bontecou and Christo. One of the best stories in the catalogue comes from Marcia Brennan’s essay illuminating the relationship between former MFAH director James Johnson Sweeney (1961-1967) and the de Menils (John was on the search committee for the new director and offered Sweeney the position). She recounts Sweeney’s and John de Menil’s collaboration to acquire for the MFAH an entire exhibition of Tinguely’s kinetic sculptures covering the full range of his career. Indeed, the three sculptures borrowed from the MFAH are dated 1954, 1960 and 1964, the latest the year of that Tinguely exhibit in Paris. Activated for this show, the sculptures spring to life at noon, 3 p.m. and 6 p.m. — unfortunately, Tinguely was a better conceptualist than an engineer, and only one is still active near the end of the exhibit’s run. (Even the one machine Tinguely created that was supposed to destroy itself, his Homage to New York activated in MoMA’s sculpture garden in 1960, failed.) Also in the gallery, Bontecou’s gigantic untitled wall sculpture of 1962 from the MFAH thrusts into the room like some mutant plant pod, vaguely threatening but compulsively fascinating. 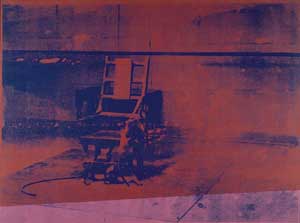 In 1968 Christo proposed the idea of wrapping MoMA to William Rubin, then director of that institution’s department of painting and sculpture. In the spring and summer of that same year, Rubin was mounting Dada, Surrealism, and Their Heritage, and he loved the idea, seeing an affinity between Christo’s wrapping projects and the surrealists’ penchant for the hidden, the hermetic and the disguised. Alas, the late 1960s were a time as skittish as our own, and wrapping the museum was an action deemed by the authorities as potentially provocative (demonstrating yet again the total cluelessness of the bureaucratic mind). But Christo did make a model, and the de Menils, who were already collecting him, gave it to MoMA as a memento of what might have been. Also sharing a gallery with the Christos are works demonstrating how the de Menils’ love of the art of their time often met their passionate engagement with the issues of their time. From the Centre Pompidou comes Larry Rivers’s I Like Olympia in Black Face (1970), a sculpture of wood, plastic, Plexiglas and oil that joins a facsimile of the 1863 Manet painting Olympia, notorious for its blatant sexuality, with a “negative” version (showing a black Olympia) in the foreground. It’s a marvelously observed pastiche from one of postwar American art’s most reliable provocateurs. But the room is dominated by four of Andy Warhol’s silkscreen paintings of electric chairs. Perhaps a little too dominated — here is where this otherwise lovely installation (I challenge the Menil’s curators to hang a show that doesn’t look good in these galleries) falters imaginatively. Two electric chairs would have been sufficient, perhaps the one given to the Centre Pompidou and one from the Menil’s collection. Despite the presence of the Christos and two of Claes Oldenburg’s playful sculptures, one feels bludgeoned by the Warhols rather than provoked. 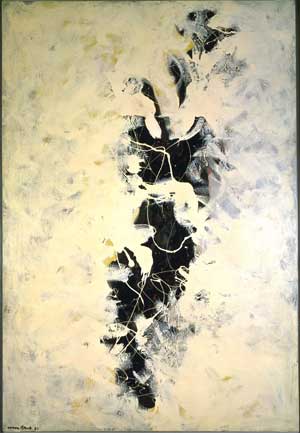 After John de Menil’s death in 1973, a shift seems to have occurred in the de Menil “extra-Houston” patronage, moving from MoMA to the nascent Centre Pompidou. This takes us back to that noteworthy artwork referred to at the outset: Jackson Pollock’s The Deep (1953). This painting was last seen in the US in Kirk Varnedoe’s MoMA retrospective for the artist in 1998; after it leaves the Menil, it is unlikely to travel again, since the Centre Pompidou waived its “no loan” policy expressly because this exhibit honors the painting’s donor. It is one of Pollock’s more enigmatic works: a narrow, amorphous dark space encroached upon by fields of white issuing on either side. Pollock’s trademark skeins of paint can be detected in the dark space, but they are dark threads thrown across a slightly less dark ground. Beneath the swirling white fields are broad swaths of yellow and silvery gray, while an occasional flash of red tries to brighten the darkness and resist the encroaching white. Because some figuration had returned to Pollock’s compositions by this time (see two untitled drawings in the same gallery), certain critics have read the dark space as figurative; others — this writer among them — see the darkness as a recessive space. There is something disturbing in all that encroaching white, a suggestion of obliteration, and something dismaying, perhaps despairing, as well. If The Deep is not among the best examples of Pollock’s paint handling, it is still an impressively moving, and troubling, work.

One salutary aspect of A Modern Patronage is to remind art-minded Houstonians of the central role John de Menil played in the establishment of the couple’s legacy. Because he died nearly a quarter-century before Dominique, and fifteen years before The Menil Collection opened its doors, it has been easy to forget the collaborative nature of their enterprise and to ascribe all things Menil to the work of Dominique. Now, ten years after her death, thanks to exhibits like A Modern Patronage and Robert Gober’s installation The Meat Wagon in 2005, John de Menil can step out from under the shadow cast by his wife’s active longevity.

John Devine is a writer and critic currently living in Houston. 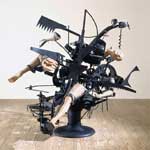