Texas Gallery, arguably the bluest-chip gallery in Houston, harvesting
talents such as Tony Oursler, Chuck Close and Elizabeth Murray among
many others over the years, presentes the blandly titled Lines, curated
by Susie Rosmarin, a recent re-transplant to Texas. 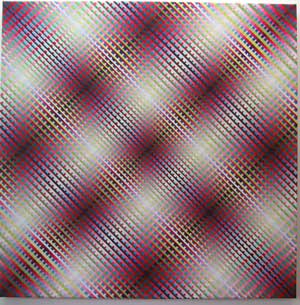 This is a strong showing of mid-career to made-it artists (ranging from MacArthur Genius Grant recipient Julie Mehretu to, well, lesser geniuses) working for the most part in the parsed-down vernacular of minimalism via linear description. Luckily, the show is not as lackluster as the title. Rosmarin’s intent with Lines is to explore the phoenix-like ability of this vocabulary to maintain relevance.

I first saw Rosmarin’s paintings in Dallas, at a solo exhibition in 2003 at Angstrom Gallery in Deep Ellum. It was an impressive show, displaying her signature line-based works executed with the usual intensity. Her compositions are heavily mired in Op art, but she adds a twist to the genre, mostly through the gradation of her overlapping elements, which converge to create pulsating undulations. Some would say the evident use of tape in Rosmarin’s paintings is a flaw, but her execution holds up so well upon very close inspection that it really becomes a sort of layered asset. Her piece X Painting is one of the strongest paintings in the show. The visual play in the painting so convincingly depicts deep space that viewing it from multiple angles is a requisite. 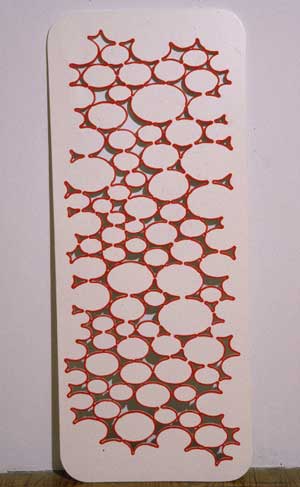 Another striking inclusion is John Tremblay’s Tourist Trap, inconspicuously resting on the floor against one wall. The rectangular enameled white board has carved hot-pink ellipses cluttered about its interior like cartoon bubbles, as if capturing a flock of tourists at some hyper-crowded Mecca. The fact that it is resting against, rather than hanging on, the wall adds to its sense of tourist exhaustion. This posture is actually refreshing, given the formalist tendencies of so much of the art in the show overall. In a way, it is the least linear of all the works, but it still adds much to the exhibition.

Aaron Parazette’s Sideslip is a great example of his trademark fusion of surfer lingo and abstracted minimalist design. The large canvas features a 1970s color scheme, with a mellow brown background supporting cream and funky green lettering. A “side slip” is a surfing maneuver where the board slips sideways down the wave, and the two Ss in Parazette’s composition create a similar swerving motion. The linear treatment in Jeff Elrod’s Untitled (Yellow), a monochromatic bright yellow painting, exposes the canvas beneath. It is an exercise in using the exclusion of pigment to create lines. The piece is smaller than Parazette’s, and perhaps that helps to create a sense of diminished impact. Still, the painting has a resonant flavor, like a sour lemon drop. 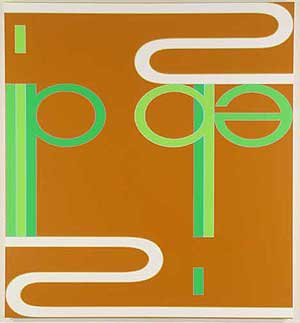 The front gallery has some amazing works on paper. Sharon Engelstein’s Bananas and Rainbow are small-scale pigment ink images. The artist has digitally generated the images and printed them on thick, textured stock. The convincing quality of the line works well with the jumbled and chaotic compositions. Bananas looks as though scores of banana outlines have been overlaid and distorted in a controlled yet entropic process. Daniel Zeller pulls off a similar trick. His line quality is equally shrewd, but he has added pigment to create little intestine-like flows of imagery. In Fryout his hand is confident and whimsical for a playful and visceral effect. 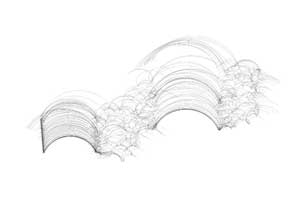 Carl Suddath’s Untitled is one of the more retro pieces in the show. This delicate homage to Piet Mondrian is painted in light blue gouache on paper. Oddly, the painting would be utterly forgettable if the reference were not so blatant. As it stands, Suddath’s work seems like a meditation on configuration. The image used on the announcement postcard for Lines is James Siena’s Nine Combs, a small colored pencil and graphite work on paper. This piece also harkens back to a formidable trope, this time a mixture of Paul Klee and Native American art. While the linear elements look more like submerged strata than those in many of the other works, which project a more ephemeral quality, Siena keeps the movement crisp and rhythmic. 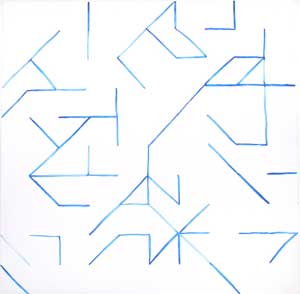 The 1998 Untitled by heavyweight Julie Mehretu possesses more name recognition than individual merit. She is easily one of the most interesting and dynamic visual artists working in the US, but this piece captures little of her vitality. Karin Davie’s Chinatownblues without Glare No. 1 is a kind of fun all-over painting, the fat, serpentine brush strokes oozing within the perimeters of the piece. Even though it achieves some depth, the end point arrives murky and muddled, self-consciously attaining a non-aesthetic status.

Rosmarin’s intention is to simply show select artists’ interpretations of an age-old device used by painters since time immemorial. In its focus on the continual evolution of line-based works, rather than on the latest and greatest line-based artists, Lines is a success. The temptation to either hone in too narrowly on the topic or to succumb to the always poisonous overcrowding is avoided here. The result is both quixotic and fresh. 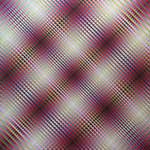