Hyperrealism and Extreme Scale: Mueck at the Modern

There is no doubt that Ron Mueck is very good at what he does. This
native Australian, now London-based artist, whose work is currently on
view at the Modern Art Museum of Fort Worth, creates true-to-life
replicas of human beings. They are remarkably realistic with only one
exception: their scale. 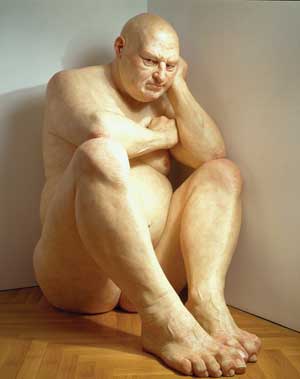 Often showing individuals in vulnerable moments, and always either much larger or much smaller than life size, Mueck’s work will certainly have people talking.

We share a lingering fascination with objects and images that appear lifelike and “real.” Yet this attraction often manifests itself in a mere curiosity as to how the aspect of lifelikeness was achieved. This unfortunately is the case with Mueck. Incredibly realistic and visually stimulating, Mueck’s work is primarily appealing because it arouses interest in how he created it, rather than provoking a more meaningful emotional or physical response in the viewer. After only a few moments in the exhibition, I overheard comments such as, “Don’t you want to touch it to see if it feels real?” and “Looks pretty real, doesn’t it?” And yet very few, if any, remarks concerned any evocation the work aroused in someone. 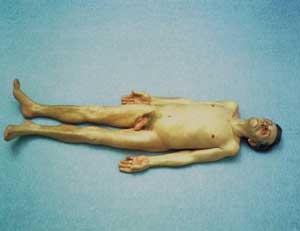 His sculptures are uncannily naturalistic; in them Mueck has achieved a level akin to photo-realism. The museum’s wall text describes them as “testing the boundaries of realism” and presenting “poignant and momentous events in the stages of life.” And Mueck’s sculptures do affect the viewer on that “poignant” human level — their very familiarity makes us want to relate to them. That element of humanity never ceases to affect the viewer whether one likes the work or not. The emotion conveyed in Mueck’s lifelike works allows for a basic, perhaps even primal, interaction between the viewer and the object. Our reactions to the objects are instinctive. For example, Untitled (Big Man) (2000), owned by the Hirshhorn Museum and Sculpture Garden, is an oversized, hairless, naked man. His expression conveys discomfort, vulnerability and annoyance—all reasonable responses to nakedness. Dead Dad (1996-97), a portrait of the artist’s father, is another work that offers its audience an aspect of humanity. The frail, lifeless, nude figure recalls one’s own experience(s) with death. This is one reason Mueck’s work is so attractive to audiences: it is easy to understand. The basic emotions it draws out are intuitive; we are empathetic with these figures’ vulnerability. One would, after all, expect to be moved by an image of someone’s deceased father, just as one would expect that the sight of an enormous naked man would bring about a level of curiosity and unease. These reactions are expected, normal and even a bit predictable — making Mueck’s work straightforward and somewhat simplistic. 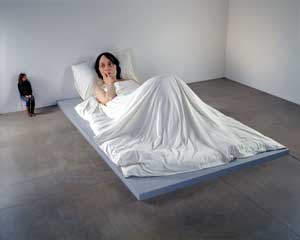 The biggest question raised in Mueck’s work is, why has he chosen to create figures that are so out of scale? The problem here is that the size of any given object seems arbitrary. Take, for example, the large newborn in the exhibition that takes up almost half of an entire gallery. Titled A Girl (2000), the figure has her umbilical cord still attached, and smudges of blood cover her naked body. In a nearby gallery, a tiny baby boy — Baby (2000) — hangs on the wall in a crucifix-like manner. The drastic change in scale between these two figures is almost inexpressibly extreme. It makes it difficult for them to have any effect on the viewer beyond a curiosity about their size (and, of course, their realistic appearances). What is the point of creating a tiny infant and then an enormous, lifelike newborn? Is it merely an exercise in achieving a level of extreme realism? And herein lies the problem with Mueck’s work—there seems to be no explanation for his choice of scale. 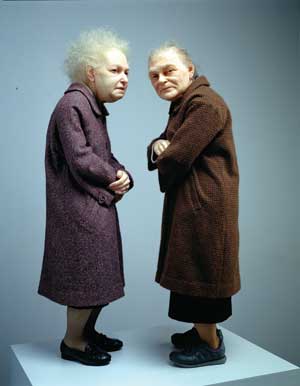 Unlike minimalism, where the meaning of the work is literally the object itself and our physical experience with that object, the true-to-life nature of Mueck’s sculptures and their extreme scale prove to be distracting for the viewer. More interesting perhaps is how moving from one sculpture to the next becomes an exercise in adjusting our own bodily presence to what we see. This constant adjustment to the unrelenting changes in scale of Mueck’s sculptures is the best part of this exhibition. We are constantly aware of the size, big or small, of the objects—and constantly adjusting to their breadth, or lack thereof.

Although popular with the public, and albeit entertaining, Mueck’s work lacks a sense of depth or meaning beyond its hyperrealism and extreme range of scale. And even though the lifelikeness and tremendous changes in size will intrigue viewers, that initial attraction will likely soon dwindle. The realistic appearance of the sculptures becomes expected and the scale less startling.

Images courtesy The Modern Art Museum of Fort Worth

Stefanie Ball-Piwetz is a writer and recet grad from TCU in art history. 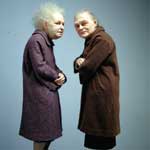