Collecting is a family affair for Houston collectors Robert, Jereann
and Holland Chaney, who began assembling their diverse collection of
cutting-edge art over 15 years ago. Early on they developed a
particularly keen interest in the burgeoning creativity coming out of
Asia. Over 100 of their artworks comprise RED HOT – Asian Art Today
from the Chaney Family Collection. 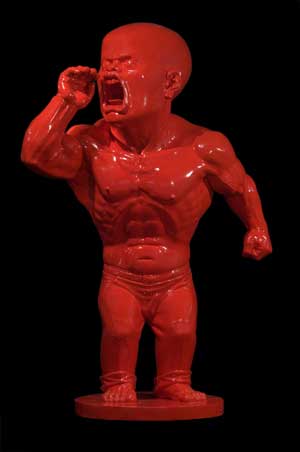 The exhibition, which opens Sunday, July 22 at the Museum of Fine Arts, Houston (MFAH), is the first major show by a North American museum to survey Asia’s contemporary art scene. Glasstire contributing editor Christopher French spoke with Robert Chaney about why he and his family began collecting and how RED HOT came into being.

Christopher French: What sparked your interest in Asian art?

Robert Chaney: In the mid-’90s I saw Asia becoming the primary driver of demand for raw materials, particularly energy, which was the focus of my venture capital fund. From studying this I concluded that another major impact would be on art. Our first purchase was a Hiroshi Sugimoto photograph, which we bought in 1997 on resale. Then we bought two photographs from Max Protetch, who really introduced Chinese photography to the US. We were initially looking at the entire Asian continent, but as it turned out, only East Asia—China, Japan, Vietnam, Korea, Taiwan, the Philippines—has experienced breakouts with truly cutting-edge art. In countries like Russia or India, there is good art being created, but it tends to be classical or modernist in orientation. 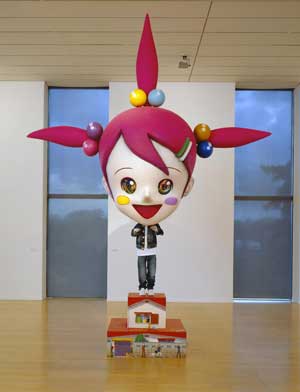 CF: RED HOT showcases your Asian collection. Do you continue to collect other art?

RC: We are interested in eight areas. Several can be defined by medium: photography, video, digital technology and a return to painting. Others are more location oriented: YBA [Young British Artists], Brooklyn School, Houston. The really big one, Asia, is about the rise of a new empire. Basically, we are driven by where the most exciting art is.

CF: Unlike a lot of collectors who adopt a philosophical position or a niche strategy, you take an approach to collecting that is a lot like your approach to business: entrepreneurial.

RC: Our goal is first and foremost to acquire innovative, great art that moves us. Part of our structure is to provide an organizational framework to allow us to be the most successful at pursuing our passions. The art world has become so competitive, it does begin to resemble business and investing in a way, because competitive advantage becomes extremely important. Much of that means “how do we get the first look?” It would amaze you how many great works we acquired based on being first. Had we been second or third, our destiny on those artworks would probably have been different.

CF: Many of your acquisitions reflect an artist’s first substantial creative statement. What happens after you make that initial commitment? 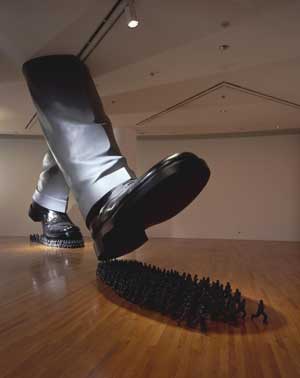 RC: We usually deal with artists in their 20s and 30s, often at the time or before they have their initial gallery show. At first we bought only one work by an artist, but as we gained experience, we began to buy additional works if the artist grew and created what we considered to be another outstanding body of work. That becomes the test. We own six diverse works by Damien Hirst now, and nine by the Luo Brothers. With the Luo Brothers, for example, you can see that the sculptures are different from the small painting, which is also different from the carved wood relief. But it is always quality over quantity in our mind.

CF: Your commitment to innovation is demonstrated by a strong affinity for technological works like video and computer-generated art.

RC: We never collect anything just because we are interested in technology. Actually, it is the other way around. What ends up in our collection tells you a lot about our current times. If you were to assemble the almost 500 works in our collection, they would represent what is really happening in the art world more than our personal bias. When we started buying video in 1993, we were inundated with people telling us that this was not important art. New media art, starting with video and digital technology, then became some of the most interesting art in the world. Our expertise and passion for technology gives us a huge advantage when we set about acquiring it.

RC: You have issues about operating, maintaining and displaying that I think make it very difficult for anyone who is not technologically oriented to manage the kind of collection we have. We have spent a lot of time figuring out how to deal with the constant change in formats, for example. Now that we are not too far from a winner on the High-Definition DVD platform, I think you will see a lot more artists working in this realm. It is similar to the leap from VHS to DVD. 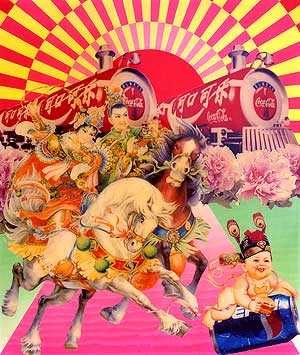 The Luo Brothers...Welcome to World’s Most Famous Brands...2006...Lacquer and paint on wood...Collection of Robert, Jereann, and Holland Chaney...© The Luo Brothers, courtesy of Sara Meltzer Gallery

CF: I notice two things about the way you install your collection. This is a collection that is lived in, and there are no categorizations — no video room or painting gallery.

RC: I look at it from a left-brain perspective, beginning with a very rigid organizing approach, and then intentionally loosening it up by trying unconventional juxtapositions. The first time I [installed the collection], I went to great lengths, taking digital photographs of every wall in the house and then laying [the art] out virtually. I made a lot of changes on the computer, which saved us having to rehang things in real time. The second time, after having lived in the house for a year, I was able to visualize every space in the house before bringing artworks into the rooms.

CF: Your Asian collection ranges from the performance extremes of Zhang Huan to the pop art of the Luo Brothers.

RC: It reflects the major trends going on in Asia. But the largest part of the MFAH’s show will focus on China, with attention given to pop art, cynical realism, performance and landscape. In China the pop movement is mainly about the collision between modern Western and classical Chinese culture. In Japan pop is about the underlying subcultures of otaku and kawaii, which are uniquely Japanese impulses.

CF: Will RED HOT’s organization be thematic or the way you present work in your home? 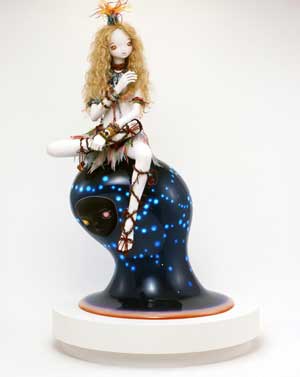 RC: It will be organized and yet somewhat loose. The varieties of pop need to hang together, and then you get into landscapes, and there are rooms with [thematic titles of] Cynical Realism, The Frenzied Life in China, Relationships and Protection. Peter Marzio has also been very amenable to placing some of our works in public areas, and I think this has worked very well. Chiho Aoshima’s City Grow was installed directly across from the restaurant, and it has been wildly popular. Sui Jianguo’s Jurassic Age sits outside the Law Building, and Takashi Murakami’s Tongari-kun (Mr. Pointy) Costume contrasts very nicely with the Greco-Roman sculptures in the lobby of the Beck Building.

CF: What did you see on your recent research trip to China?

RC: The March Beijing trip further confirmed our ideas and allowed us to refine our thoughts about where things are going. We certainly saw a huge number of artists who are working in a very exciting and dynamic fashion. Beijing has a major gallery area, and we spent some time there. In general China has not embraced the gallery system, and in some cases it is Chinese artists who are the uber-entrepreneurs: most think they are better off selling directly from their studios. We spent most of our time making studio visits, which is the opposite of our routine in New York, where we spend most of our time in galleries, with occasional studio visits. The Chinese scene seems very dynamic, and I sense there is going to be even more innovative art coming. We were able to get everything from our Beijing trip into the show, so RED HOT presents a fresh and up-to-the-minute picture of our collection.

CF: Talk about your visits to artist studios in Beijing. 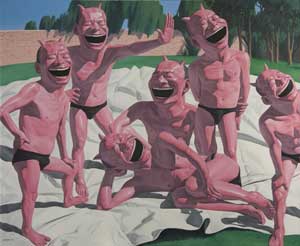 RC: We saw a lot of young artists, all located on the eastern outskirts of Beijing. Artist spaces in China are much like those in the United States: people work out of condo apartments, warehouse or factory spaces, whatever they can find. Talking to people there, you could see that they were still a little cautious. Tiananmen Square is not so long ago and is still in the back of people’s minds. Until fairly recently the government was actively reviewing shows and raiding exhibitions that contained even one unacceptable artwork, or stopping art shipments. But the government seems to be moving from viewing art skeptically and as maybe subversive to seeing it as something making China shine in the world. This is very important in China right now.

CF: What do you want people to take away from RED HOT? 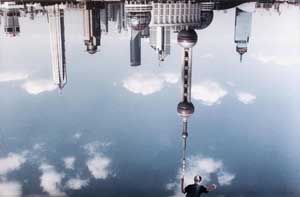 RC: What you are seeing in RED HOT is a tightly focused, 12-year survey that arranges a multitude of really interesting themes. It is a snapshot of what is happening in Asia now and where things are likely to go. I think what is happening in Asia in contemporary art is like what happened in America in the first decade after World War II. People ask me, “What are you going to do next after Asia?” And the answer is, “More Asia,” just like a visionary collector would have said, “More America,” in the 1950s. That is one of the biggest things I am trying to get across. This is not a fad or a minor movement. This is the rise of an empire — a once-in-a-century occurrence.

RED HOT – Asian Art Today from the Chaney Family Collection remains on view at the Museum of Fine Arts, Houston, through October 21.

Other recent and upcoming exhibitions focusing on contemporary Asian art include:

Made in China: The Estella Collection of Chinese Art remains on view at Denmark’s Louisiana Museum of Modern Art through August 5.

Mahjohng: Contemporary Chinese Art from the Sigg Collection was shown earlier this year at the Hamburger Kunsthalle in Germany.

CHINA NOW: Art in Times of Change was shown earlier this year at Vienna’s Essl Museum.

© MURAKAMI, a retrospective of the art of Takashi Murakami, will be in Los Angeles at the Museum of Contemporary Art from October 29, 2007, to February 11, 2008.

Christopher French is an artist, writer and Contributing Editor of Glasstire. He currently lives in Houston. 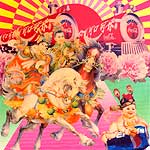