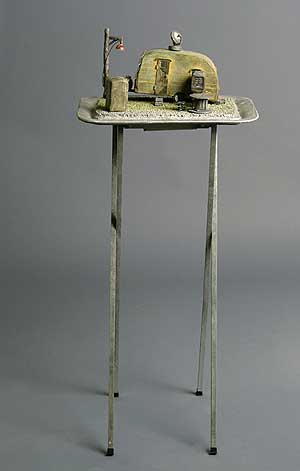 The best artists working in the postmodern vernacular embrace the
conceits they are ridiculing, allowing the viewer the guilty pleasure
of partaking in the culture while feeling safely above it through that
mother of all postmodern concepts, irony. Andy Warhol was the master
of this sleight-of-hand, of course, but others still diligently have
followed suit.

Chizinski presents a mock-up of a trailer park, replete with Airstreams and double-wides and even a row of power lines in the rear. The little community is arranged in a single small room in the gallery, giving a sense of intimacy to the installation. Chizinski’s use of cast bronze TV dinner trays as stands for the dwellings is a brilliant move. By placing the interior on the exterior, it gives voice to Chizinski’s real interest, that of exposing this culture’s innermost conceits and prejudices with an honest and even reverent tone. Like Warhol, his take is direct and simple. The artist calls his own background one with a “white-trash aesthetic.” He examines this world of poor white rural Americans in miniature while subtly giving clues to his links and rifts with it.

The models are made out of cast aluminum and steel. The artist has hand-carved each setting out of wax, adding little refinement to the pieces, which conveys a sort of clumsy approach. Some tables consist of a little home and a bit of landscaping, while others feature a youth recreation center, an aquatic center and a cell phone tower. Chizinski has slyly placed certain art icons here and there, mostly ready-mades, that speak of a reclamation of materiality. You come upon one of Marcel Duchamp’s Bicycle Wheels in the front yard of one of the co-op lots and it feels totally appropriate. Chizinski’s attitude seems to be one of childlike wonderment at the discovery of such art. Ready-mades have content because of what is said about them, but they can also have a life separate from that, one of simple play. It is as though Chizinski’s background supersedes his art education. He clearly understands postmodern concepts but, uniquely, is not embittered and so forgoes a cynical dialectic. While not seeming naïve, his show retains the good of the movement. 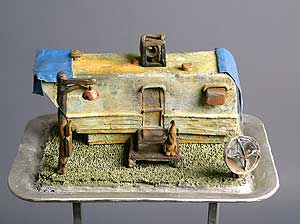 Hung about the walls of the room are shelves containing various cans and jars that have been cast in porcelain. They are labeled Made in the USA or Not Made in the USA, depending on where the originals were fabricated. While aesthetically interesting, these objects do not resonate as strongly as the trailer park venue. They reach for a similar statement, but get caught up in semantics. Maybe this world has been too globalized for too long to take seriously someone’s bemoaning foreign-made goods (or even an artist’s musing on that change). Twenty years ago, the joke would have resonated.

Like Warhol, Chizinski is an artist of appropriation, both taking objects from their own immediate surroundings and celebrating what should not have been celebrated according to current norms. Campbell’s soup cans are no longer just cans of soup. Maybe the aesthetic value of trailer park lots will skyrocket in the near future, who knows.

Garland Fielder is an artist and writer
living in Houston. 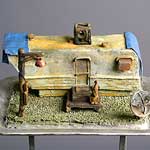 That’s the first time I’ve heard that one. Next time I will pull out the stupid cork just for you.

they’re so crafty, do you really think a Warhol comparison is warranted?

Well, I see your point, but two things led me to this comparison: Warhol’s origins were definitely on the white trashy-, and he embraced this with his usual irony/warmth in many ways. He not only mocked the world of pop culture, but also of a more rural nature (re: paint by numbers series). Secondly, I spoke with Chizinski about his presentation/aesthetic and it was very consciously conceived. His choice of clumsy/rough renderings was a purposeful step away from any sort of machine-like reference. (That point is actually, pretty un-Warholish, but my main comparison was idea driven, rather than aesthetic.) It is the conscious choice of voicing that reminded me of Warhol. And Warhol’s pretty damned funny when you get down to it.