The Late Paintings of Norman Bluhm at The Station Museum

Norman Bluhm, a second-generation abstract expressionist whose name is
seldom bandied about, painted some of the most remarkably direct
paintings of that genre at the end of his life, when he was in his
mid-seventies. The paintings are on display at the Station Museum of
Contemporary Art in Houston. 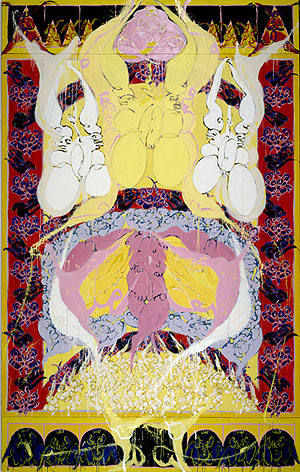 They provide a unique insight into an artist at the pinnacle of his work, which usually comes sooner rather than later. These paintings are expressive of the ideals of abstract expressionism, but their quality of spiritual reckoning and divine inspiration comes across in such a frank and honest manner that the works succeed at transcending those pretensions of the period so often ridiculed by successor movements. These paintings almost make one embarrassed by the somber religiosity of The Rothko Chapel down the street; both artists possessed the same modernist fervor, but while Rothko’s five monoliths and three triptychs constrain the viewer in an octagonal of dark reds, Bluhm’s paintings project such a life-affirming and honest candor, one cannot help but feel awash in a glow of spiritual joy.

This accomplishment rests in the simple fact that Bluhm chose to adopt the literal conventions of religious iconography (pantheistically across the board) in his last body of work. For all of the great ab-ex ambitions of using the mark-making experience to transcend this mortal coil, Bluhm’s paintings excel in a secular/spiritual blending because they rely on existing tropes of iconography, such as stained-glass narratives and religious imagery. By abstracting it from the original source material, the artist was able to reinject the imagery with its original intent. From a secular world comes a spiritual guide, unprejudiced in its appropriation and so untainted by purist snobbery. These large-scale panels exemplify what art is supposed to do, or at least what it can do even today.

Initially, the painterly quality of Bluhm’s art evokes the work of Willem de Kooning. Or rather it intimates the influence of that older European’s journey. One can clearly see visions of Franz Kline and the boys in Bluhm’s earlier works, but he later adapted curvilinear imagery that set him on a road apart from the purists of the field. His paintings evolved into escapades featuring seductive female armatures and drippy forms of consummate flesh. Oddly, even as Bluhm’s painting became more visceral, he began to adopt a grid structure, one that was fully realized in these last paintings. The panel-like precision supporting the loose application of vivid color directs the viewer in a powerful and sustaining way.

For instance, Byzantine Windows presents a large central section with a pastiche of imagery evoking Buddha, Madonna and Shiva all at once in a Rorschach-like unfolding. Six panels that contain mini-narratives of subplots flank this central movement. Blood of Mars evokes the god of war in similar warm tones and iconographic morphing. The reflected and repeated imagery does not lose hold of its purpose. The rich hues bring to mind Henri Matisse’s Dance as much as they do monastic tapestries. Satan’s Conquest works in a similar vein, only in a vertical orientation. Here again is evidence of Bluhm’s utter confidence in mark making. The underlying character of the repeated motifs is enhanced by his inclusion of wispy pulls of paint, which themselves follow a symbolic patterning that repeats and reflects.

In one sense, the paintings should not work. The element of corporeal corruption in this imagery would defile any lesser artist’s attempts. Small vignettes of spread-legged female forms adorn panels of simulated reverence. Abstract swashes resemble dancing plucked chickens, swaying in mirth amidst cabalistic-like renderings. But in the hands of Bluhm, the immense works relieve the viewer of any problematic sanctimony. The worlds of Ganesh and Babar collide to the delight of the enterprise.

While the Station Museum is a remarkable housing for Bluhm’s works, a soundtrack of Gregorian chants that played in the gallery at the opening was unnecessary and heavy-handed. The religiosity of the work needs no accompaniment. The live chamber ensemble playing Vivaldi later on only added insult to injury.

As I was looking at Ode to Apollo, I was told that it was the last painting Bluhm made before dying of a stroke. I pictured him laying his brushes down, saying a few words remarking on its completion to his wife and realizing what few artists do — a body of work that succeeded in its goal of melding the spiritual with the expressive, the vastness of the universe with the personal inventiveness of a master. 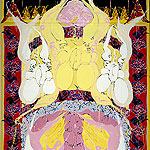 it brings Francis Bacon to mind.