A wonderfully eclectic gallery sits on West Franklin Street in
Waxahachie, Texas. Bringing in a variety of artists, the Webb Gallery
rotates shows approximately every eight to 14 weeks. The current
exhibition features the work of a self-taught African-American artist
from Rockdale, Texas — Ike E. Morgan. 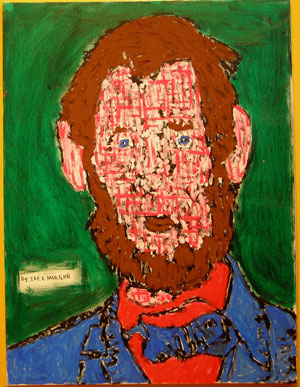 Primarily portraits, Morgan’s works range in media from pastels and charcoal on cardboard to acrylic on canvas. The early works from his time spent at the Austin State Hospital are particularly intriguing; Morgan began investigating aspects of portraiture and history while being treated for schizophrenia. Diagnosed in his early teens, Morgan lived at the state hospital for more than 20 years. His interest in portraiture, largely US Presidential portraits, was sparked by his interest in history and the striking representations of the country’s Presidents and other historical figures on US currency.

One of Morgan’s first portraits is of Ben Franklin — a delightful image rendered with beautifully delineated features and a magnificent sketch-like quality. Morgan has also made numerous portraits of George Washington and Abe Lincoln, and recently he has produced a series of portraits of George W. Bush. This series, which began when Morgan was approached by Newsweek in 2003 to paint a portrait of the current President, has transpired into a mild obsession. One of Morgan’s recent portraits of Bush is wildly creative, depicting the President in glittery acrylic paint as a blond-haired young man, a work that somewhat resembles Stuart Davis’ Self-Portrait from 1919, owned by the Amon Carter Museum. When told the current President is less than popular, Morgan replied that Bush will always be a “celebrity.” 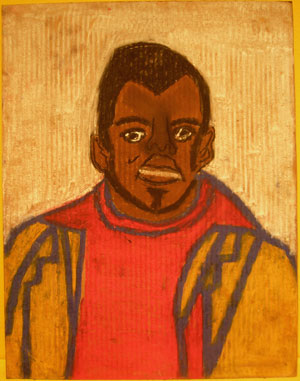 Morgan’s early pastels and charcoals are also portraits. Here, he has portrayed a variety of individuals, some which may have been staff members or even other residents at the state hospital. Two works depict striking African-American women in sketches that are quite flat and illustrated in bold colors; the faces are the most detailed aspect, though still with simplified features. During his time in the hospital, Morgan also completed a self-portrait, the only one he has ever made. He looks quite young and is portrayed in much the same way as the other portraits from this period of his work — very linear and with flat colors. The eyes are particularly endearing; their intensity provides a sense of immediacy and even a glimpse of the troubled soul inside. The cardboard ground Morgan used in these early works adds a textured quality that complements the flat colors and strong lines.

Morgan’s portraits, particularly the early ones, make a stunning comparison to a current exhibition on view at the Amon Carter Museum, William H. Johnson’s World on Paper. Johnson, also an African-American artist, worked in the 1930s and ’40s primarily in serigraphs and relief prints. Because he spent time in Europe and New York as an artist, Johnson’s prints bring together aspects of the modernist avant-garde with his upbringing in the rural south. His subjects often draw on African-American culture, including jazz and soul music, from both city and rural life, as well as historical events, such as his work Lincoln at Gettysbury III (1939-1942). Lincoln is shown giving a speech to a crowd, conveying a patriotic sense of liberation and pride. 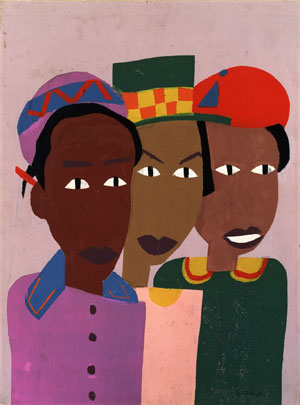 The best prints are from Johnson’s Harlem and City Life series. Primarily serigraphs, though some are tempera on paper, the works depict subjects that range from street musicians to neighborhood activities such as Soap Box Racing (ca. 1939-1940). Other recurrent imagery in Johnson’s work evokes southern life, such as church scenes and daily chores such as sewing. The prints are delightfully animated and capture a real sense of African-American culture. Their simplified renderings, strong colors and creative juxtapositions give the works a sense of energy, movement and life.

Johnson’s works from Harlem and City Life, as well as those showing southern life and culture, are, like Morgan’s, remarkably flat and bold in color. There is an underlying folk art similarity between the two artists. Their stunning imagery and confident use of color is refreshing. The Johnson exhibition is a wonderful demonstration of his distinctive style, and if you get a chance to travel to Waxahachie, it is certainly worth your time to stop by the eccentric Webb Gallery to see Morgan’s work. 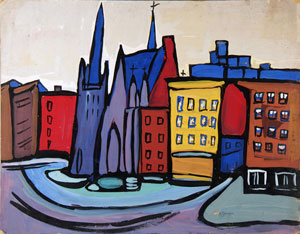 In addition to the featured exhibit, the other half of the gallery shows work that changes weekly. Also on display is a great showcase of photographs by National Geographic photographer Robb Kindrick. To create his pictures of present-day ranchers and South American archeological digs, Kindrick made tintypes and then photographed them. Both the photographs and tintypes are exhibited at the gallery, all beautifully composed and rich in tonal variations.

While the Webb Gallery is somewhat atypical of contemporary art galleries, in that it is very much not a white cube, the owners, Julie and Bruce Webb, have managed to create a space that allows you to spend time with the works, despite the menagerie of objects that also live at the gallery, ranging from toothpick sculptures of Ferris wheels, airplanes, and the Goodyear blimp, to antique lodge paraphernalia and vintage carnival banners. Morgan’s work is equally intriguing and eccentric, making the Webb gallery a fitting environment for it.

Stefanie Ball-Piwetz is a writer and grauate student at TCU in art history. 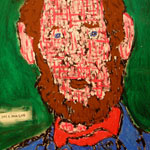