In the age of biennials, what makes the Texas Biennial different or necessary? I wondered how we got in this mess of biennials in the first place. All
roads lead to the French. It started with the Salon, whose original
purpose was to display the work of recent graduates of the École des
Beaux-Arts in Paris. 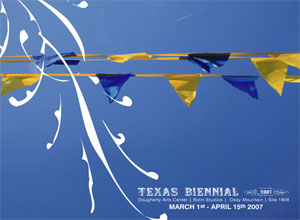 The brief history goes something along the lines of… In 1667, Louis XVI sponsored members of the prestigious school in an annual exhibition in Paris. Shortly thereafter the decision was made to go public with the exhibitions in the Salon d'Apollon of the Louvre Palace. The name “Salon” stuck for multiple reasons, one being its original location. The Salon became an exhibition type because of institutional politics and other subsequent historical events, and when this exhibition type moved to other locations, it took its name with it.

An exhibition of recent graduates just like the ones at UT, right? Not really. The exhibitions took a different turn when they were opened up to the public. A jury was instated in 1748. People began writing about the exposition in the gazette, in turn creating what I believe to be the birth of the critic. I find it fascinating to think about this gesture⎯putting together a student exposition similar to a coming out party for debutants⎯becoming so controversial. During the French Revolution, the Salon shifted to include works from all French artists. When the jury process was established the exhibition begins to shift in level of importance. The public’s opinion started to rise to the surface, although the Academy continued to maintain control over parts of the exhibition and the press. Artists began to revolt. A number of rival Salons, particularly the Salon des Refusés were organized in objection to the Salon system in place. How is that for DIY in the late 1800s?

Like a Salon des Refusés, the Texas Biennial does not take “no” for an answer. We all know the Whitney Biennial is the big to do in New York for American artists, in particular emerging New York-based artists. There is also the growing popularity of the California Biennial with Los Angeles-based artists at its central axis. Where does Texas and all of its artists fit into this equation? Texas has never fits in any equation, exactly. Remember, Texas is the only state that was its own country at one point. The DIY, grassroots mentality is prolific throughout the state and the Texas Biennial grows from this mindset.

Not to be a wet blanket here about everyone’s effort in pulling off a show this size ⎯not to mention twice⎯but by asking questions about the future of this project—how will this year’s Biennial be different? Will it become necessary every two years? How will it help our community connect?— are healthy questions to ask as the sequel comes around. Here is where I look to the French. The Salon des Refusés became so influential. Manet and the Impressionist exhibited in the Salon des Refusés and look what happened to their careers. The Texas Biennial could and should be a platform or launching pad for Texas artists, an introduction of their work to the national/international community. This will determine the show’s success.

This year’s crop of Texan-born, -raised and –transplanted artists have varying levels or experience: from young whippersnappers, 20- to 30-something mid-range teachers, MFA grads to my favorite category “senior/established” artists⎯a category that needs to be explained further. Some artists might simply just be over thirty, some might have a long history of making work but are more well known with specific regional audiences. Others might have found making art as a second or third career path and are now really hitting their stride. I find this last category most interesting because it is the most complicated and layered, but the work is still emerging and still relevant to our contemporary dialogue. And last, but not least, are the dark horses, the names I am not too familiar with. But you never know how influential their work might become after the show is over. Only time will tell the marks made by this year’s exhibition and its artists, but we should always remember our DIY mentality to make “creativity prevail” always! [1.]

I am posing a call to arms, or better yet a proposition to you, Biennial artists, to make the work in this show really count. Make your work matter, because it is the way our community will grow and flourish. Maybe, just maybe, there will be some ripple effect that makes rest of the country takes notice of and finally understands why we live and work where we do. You never know who we’ll be talking about in ten to fifteen years.

1. Taken from a prediction that Matthew Day Jackson wrote that I keep on my desk and read ever morning.

This essay was commisioned for the TX Biennial catalogue.

Rachel Cook is the editor for Glasstire. 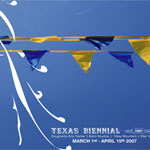 How artists are chosen for this sort of thing – whose eyes do you need to get in front of to be considered. Does anyone have insite on this?

The last two biennials have been open submission. Anyone can send in their slides for consideration.