It is somewhat difficult to walk into a show entitled Artists &
Cowboys Should be Friends entirely objectively. Unfortunately, this
show at the University of North Texas’ Artspace gallery in Fort Worth
is forced to constantly compete with its clichéd title. 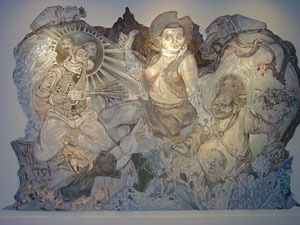 Curators Baseera Khan and Edward Sentina brought in 11 artists (Michael Berryhill, Ed Blackburn, Mike Egan, Ali Fitzgerald, Paul Giggo, Ryan Hennessee, Jacqueline Klempay, Jim Malone, Reed Posey, Margit Raczkowski and Alan Reid) for a show premised on the “parallels between two highly romanticized archetypal images: the artist and the cowboy.” Painted on the wall beneath the title are five phrases pointing to the varying topics covered, or attempted, in the show:
• obsolescence — finding a new way to continue the same
• stereotype — ‘a starving artist’ and ‘the lone ranger’
• gentrification — having raw talent for real estate scouting
• showmanship — state fairs and art fairs are great fun
• linguistic drift — what are the implications?

UNT Artspace FW is one of three UNT galleries in the DFW area. Fairly new, the gallery sits in the middle of the cultural district, between the Kimbell and Amon Carter. The current show covers a wide range of media — drawings, paintings, a mixed-media wall piece, video and various other sculptural works. Pleasantly, the space is well utilized and not overcrowded. And overall the work is not lacking in talent. But the premise of the show is so distracting, it is like a bad song you cannot get out of your head. 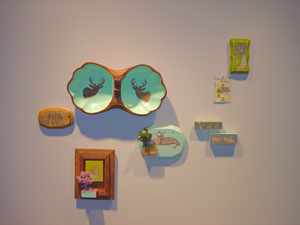 The desire to curate a show defined by the cultural differences that exist in Fort Worth, among other places, is understandable, although sometimes these ideas are better in theory than in actuality. After all, Fort Worth, a.k.a. Cowtown, does present a unique blend of two very strong and often different worlds — the stockyards and the cultural district, for example. But this show seems to cater to the stereotypes often associated with cowboys. In a large, mural-sized acrylic collage, Austin-based Ali Fitzgerald has depicted a rather coarse, disreputable and slightly fleshy cowgirl surrounded by various homespun figures. This is not to say that her mural is technically bad; on the contrary, the collage, somewhat reminiscent of graffiti art, is fairly good. But similar pieces simply do not work. Baltimore-based Alan Reid’s Bonnie and Clyde consists of two figures, made of cardboard and tape, placed on the floor with a red polka-dot scarf beside them. Alas, these cardboard constructions are not much more than they seem — cardboard, roughly in the shape of two bodies, on a floor. And despite the title’s connection to the infamous bandit couple, the work fails to convey any sense of immediacy or emotion.

Austin-based artist Jacqueline Klempay’s untitled three-dimensional photo book (yes, you have to put the paper glasses on to look at this) is unsuccessful. Her photographs are of rural towns, old gas stations, cowboys on horses and various country scenes, which would have benefited much more from simply being printed, absent the three-dimensionality, and hung on the wall. The video piece by Paul Giggo is actually quite nice to begin with. In a somewhat Warholian fashion, a rugged and handsome cowboy (all you see is his head) moves about very slowly. Regrettably, blinding flashes of a color resembling nickelodeon green rapidly cover the screen, leaving short intermittent views of the cowboy. Other than being visually uncomfortable, the strobe-like flashes of green appear to serve no purpose. 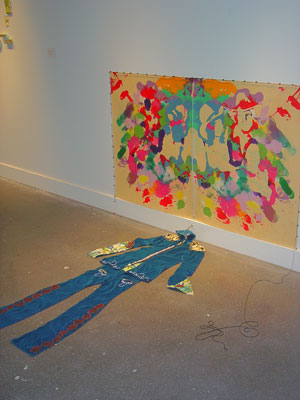 Fortunately, Mike Egan’s Indians Go Home, slightly tucked away in one of the gallery’s niches, is intelligent and, to say the least, simply good. Based in New York City, Egan has created a wall piece out of an old pair of boots with contrived narrow heels, and a small drawing containing the word “immigration” and the statement: “gendered modernisms, pulled apart, reconstructed, made transparent, infinitely connected, exposed, returned as tradition.” In blood red paint, the words “Indians go home” run across the wall beneath the boots. And the entire thing is covered in smeared dirt. By far the best piece in the exhibition and a clever, not to mention appropriate, commentary on past and present sociopolitical currents.

Had the show been titled something more astute and perhaps less restraining, this show could possibly have been more successful. Unfortunately, the implications of “artists and cowboys should be friends” hangs over the space like a dark cloud. And it proves difficult for the artists to overcome.

Stefanie Ball-Piwetz is a graduate student in Art History at TCU in Fort Worth. 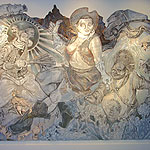