Mostly my sculpture is the color of metal or wood. Sometimes I work with video and sound. I try not to paint. – Artist's Statement, Who are you looking at? 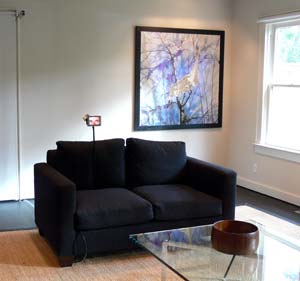 "Riley has never been a painter," said his sister, Katie Robinson Edwards, who holds a PhD in art history from UT in Austin. "He works with metal and wood, or video, but he doesn't add color; he just uses the medium as it is." I called Edwards to talk with her about Who are you looking at?, a collaborative show between brother and sister that was presented at testsite in Austin from September 8 through October 15, 2006. At testsite, Lawrence Miller regularly invites a visual artist and a writer to collaborate with one another, with open-ended expectations for these experimental relationships. "I was in a funny position: Riley already knew what he wanted to do for the show," she said, "so I decided to be the little sister and mess with him a little, and write a fake artist's statement. Artist's statements are tricky," she added. "Once you read them, you end up thinking about the statement and not the art." 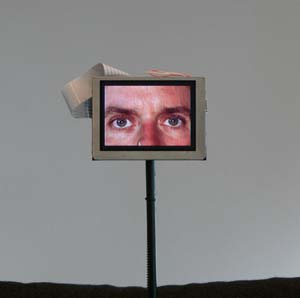 While its facts are not untrue, Edwards's faux autobiographical statement, written in a poetic and lyrical fashion, reveals untraditional information about her brother, the artist: "My name is Riley Robinson. I was born on the island of Okinawa, Japan. When I was born, the islanders thought I was blind. Because I had green eyes." When Edwards wrote, "I try not to paint," she was reflecting Robinson's propensity for understatement and modesty, but she also acknowledged the fundamental difference between painting and sculpture. Both media are defined by specific limitations, but Robinson's choice of sculpture, video and sound speaks to his capability to work as a designer and engineer. Robinson's sculpture — the steps from a lunar lander, a bronzed pair of overalls — uses understated, simple forms that quietly evoke meaning, tinged with subtle humor. Encountering a piece of Robinson's sculpture is like hearing the echo of a punch line or savoring a witty joke that brings a chuckle long after it has been told.

In his video work, Robinson's cleverness engages the viewer. At testsite, Miller has converted the living room of his house into a gallery space. Robinson and Edwards left the space virtually untouched, with the existing contents — two black couches, a coffee table and existing art — intact. Robinson mounted a 4' x 6' monitor that showed a digital recording of his open eyes, looking, on a pole that stuck up from one of the black couches at his own eye level, as if he were sitting there. As visitors entered and moved around the room, Robinson's eyes followed them. This awakened the viewers' sense of being looked at: a disquieting, uncanny sensation. Observing art can be a private, almost vulnerable activity — like listening to a joke, and feeling the pressure to get the punch line, but doing this alone with the art. In the basically untouched living room with its framed art from testsite's past collaborations, I didn't register any other components to Robinson's installation except some M&Ms and a recording of Edwards as she read the artist's statement. The robotic Robinson plays with the process of observing art, monitoring the viewer as he or she observes the art. 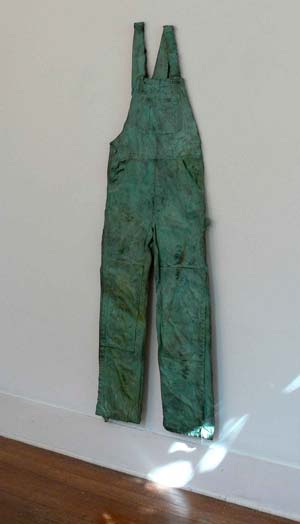 In the foyer hung two framed pictures, a photograph of Clara Barton and a self-portrait by Edward Hopper. The portraits placed there gave Robinson the weird feeling that their subjects' eyes followed him; no matter where he was in the room, Barton and Hopper appeared to be looking at him. (Robinson first encountered Barton's photograph in her house-turned-museum just down the street from his own childhood house in Glen Echo, Maryland. Robinson learned to weld at Glen Echo Park, just across the creek from Barton's house.) Aside from the effect of eyes following, Robinson has always admired Hopper's 'clean, straighforward painting;' certainly Robinson uses this same directness in his own art.

Her brother's goal for the show, Edwards explained, stemmed from a previous effort in an exhibition at the McNay Art Museum in San Antonio, which she described in her statement: 'The last time I made a video sculpture / I filmed my face / as I read from biographies about artists / whose paintings hung in the gallery.'

'He wanted his eyes to follow the onlooker around the room,' said Edwards, 'but it didn't work out. The show at testsite was a honing of this idea, and he worked with a computer programmer, Chris Musgrave, who helped him build a program that would track people moving in the room, so that his eyes followed your movements.'

The visual riddles that Robinson makes with his sculpture come from his seemingly random and sometimes mundane choice of objects, a twist on the obvious. But Robinson's sculpture is always beautifully formal and gorgeously crafted. A giant 16-foot soccer ball, Robinson's proposal for a public art piece at San Antonio's Youth Park Sports Facility, is made from Cor-Ten and galvanized steel, then submerged in the ground so that only a quarter of it shows. The immense ball becomes part of the landscape, built into the site, but not without provoking frustration: How to dig it out? How did it get there? What's really under the ground? Robinson's sculptural objects are often representational but enigmatically symbolic. The mental puzzle derives from their simple, straightforward presentation and the context in which he places his work. As with the video, a lapse occurs between the viewer's initial confrontation of the piece and getting it . 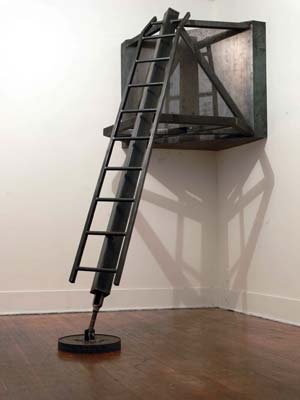 At Sala Diaz, for example, Robinson exhibits two sculptures, Green Jeans and LEM (Lunar Excursion Module). As at testsite, Riley has also placed two framed images in Sala Diaz's hallway: a signed copy of Michael Collins's paperback Carrying the Fire and an autographed black and white photograph of Mr. Green Jeans. (Robinson, who grew up in Washington, D.C., got Collins to sign his autobiography during a commencement address at his brother's school.) For an exhibition titled a short history of television, Robinson's decision to include a bronze of green overalls and a replica of the lunar lander's steps doesn't seem overly difficult to understand. The exhibition touches on childhood memories of Captain Kangaroo and the July 20, 1969, Apollo XI moonwalk, witnessed by the largest worldwide television audience in history. They memorialize television's transient moments that nevertheless left deposits of memory in an entire generation of children. 'Everyone knows that Mr. Green Jean wore green overalls. They watched him on black and white television. Then he would enter as Mr. Bainter the Painter. In people's living rooms on black and white television,' Edwards wrote in the artist's statement.

'I heard a statistic,' explained Robinson, 'that stated a surprisingly large percentage of people believed that NASA faked Armstrong's walk on the moon, and I was struck by the irony between that and the gullibility of people who believe that, even though Captain Kangaroo's show was in black and white, Mr. Green Jean's overalls were really green.' Robinson made the bronze overalls through a ceramic shell lost-wax process, applying cupric nitrate for a green patina. But parts of the clothing's buckles still look like brass, as if they're really the buckles themselves. It is an object that appears enticingly real, down to the canvas weave and the worn patch in the knee.

Robinson took the exact dimensions of the lunar lander from a set of plans he found online, but then he abstracted the design. While the original steps were made from round aluminum tubing, Robinson's sculpture is square steel tubing. At Sala Diaz, people climb up and down the 10 steps on the ladder, a movement that implicitly carries astronaut Buzz Aldrin's lunar epiphany: 'Beautiful. Beautiful. Magnificent desolation.' Yet nothing happens when you get to the top of the ladder in the small gallery. The original of the steps Robinson reproduced still remain on the moon, a kind of moon trash, what was discarded after the lunar module ascended and redocked with the Command Module, piloted by Collins.

In Carrying the Fire, Collins describes his ascent from test pilot to astronaut, his training and his involvement in the development of the technology that made space travel possible. Nearly 40 years later, many of the projected goals for future space travel, and the optimism and excitement surrounding the space program, seem left behind on the moon with the steps. Robinson's sculpture stands as a heavy reminder of this landmark achievement during the days of black and white television, in contrast with the incredible capability of today's technology and the relatively little progress made in space since those days, despite the potential. The conspiracy theory that NASA faked the moonwalks further complicates what these simple metal steps may symbolize.

At Artpace, where Robinson has worked as studio director for 12 years, he manages the Artists in Residence program. Part of the job involves facilitating the production of the art made by residents, a complicated endeavor requiring diplomacy and technical knowledge. When I was reading Collins's book, a passage jumped out at me that reminded me of Robinson, who remains professionally above-the-fray no matter the egos or challenges he encounters. Collins is referring to Life 's exclusive contract to obtain the astronauts' stories and what the journalists asked:

What they really wanted to know was: beyond all that technical crap, what did the crew feel ? How did it feel to ride a rocket, what thoughts were racing through your mind as you plummeted toward the sea with the parachutes not yet open? How scared were you, anyway? This is what Life paid to find out, and what the others pried to find out without paying, and in truth, neither unearthed very much. Life's little extra certainly wasn't worth the money. I suppose this was mainly because, as technical people, as test pilots whose bread and butter was the cold, dispassionate analysis of complicated facts, we were frankly embarrassed by the shifting focus. It didn't seem right somehow for the press to have this morbid, unhealthy, persistent, prodding, probing preoccupation with the frills, when the silly bastards didn't even understand how the machines operated or what they had accomplished. It was like describing what Christiaan Barnard wore when he performed the first heart transplant. Furthermore, we weren't trained to emote, we were trained to repress emotions, lest they interfere with our very complicated, delicate, and one-chance-only duties. If they wanted an emotional press conference, for Christ's sake, they should have put together a philosopher, a priest and a poet — not three test pilots. Of course, they wouldn't get them back to have the press conference, because this trio would probably emote all the way back into the atmosphere and forget to push in the circuit breaker which enabled the parachutes to open.

Robinson is also a test pilot and engineer. His art is reductive and simple, but evocative. He designs his art to be the circuit breakers that allow the mind to open.

Images courtesy testsite and the artist. 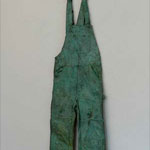