Currently at the Fort Worth Modern is a retrospective of Japanese-born American photographer Hiroshi Sugimoto, a sampling of his photographic images from the past 30 years. Unique to this particular installation of his retrospective is the coupling of the exhibition with a course offered by TCU's new Deedie Potter Rose Chair of Art History, Dr. Frances Colpitt. Specializing in contemporary art, theory and criticism, Dr. Colpitt, or Fran as TCU graduate students like to call her, is a wonderful addition to the university's art history department. 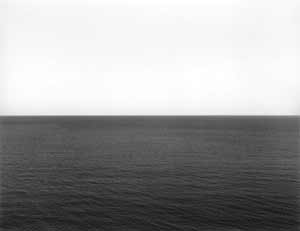 Fran's class is a two-part lecture series that presents Sugimoto's work in comparison/dialogue with the work of Fluxus, the minimalists and Japanese traditions of art, religion and philosophy. The first hour is a typical art history lecture for students, where discussions take place on articles and essays by Sugimoto, Roland Barthes, Rosalind Krauss, D.T. Suzuki and Geri DePaoli, among others. The second hour is open to the public. Several colleagues and experts have been invited to join Fran in delivering lectures about a wide variety of issues relating, however tangentially, to Sugimoto's work. Topics of discussion have ranged from the history of photography to contemporary Japanese art.

As a student in this class, I have found the lectures enlightening on Sugimoto's unique relationship to Japan and the United States, or to East and West in broader terms. The mutual influence of both cultures on his work has proven especially intriguing. Sugimoto was born in Tokyo in 1948 and raised in a Christian home, and he did not embrace his Japanese heritage, specifically Zen Buddhism, until his time in California when studying art at the Art Center in LA. Two readings in particular have provided an insightful way of thinking about Sugimoto's work: Geri DePaoli's "Meditations on Humor: Art as Koan" and D. T. Suzuki's "What Is Zen."

The essay by DePaoli is particularly interesting given the focus of the course: Sugimoto, minimalism and Japan. DePaoli discusses the influence of Japanese aesthetics on American art in the 20th century, noting that more than any other area in American society, art is where Asian thought and influence is most readily evident. We see this in an increased interest in space, time, form and voids, as well as new concerns with artistic process. The effect of Japanese aesthetics and literature is evident in American artistic movements such as abstract expressionism, minimalism, happenings and even some postmodern work. The surface focus of Sugimoto's photographs seems to coalesce most closely with the goals of the minimalists. Primarily a sculptural movement, minimalism emerged out of abstract expressionism in the 1960s and is characterized by a rejection of illusionism and an emphasis on identifiable and tangible objects. 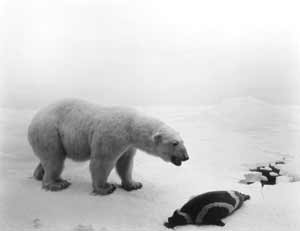 Sugimoto's photographs purport to present the true essence of things. His Seascapes are meant to portray a "primordial landscape" that has resisted modernization. The Architecture series presents the iconic structures that define modernism in their "truest" state — as each respective designer's idea. The blurred architectural images convey the buildings as they were meant to remain forever, as concepts existing before the buildings" birth and after their death. In a similar way, minimalists such as Donald Judd created objects that did not represent objects, but actually were objects. Sugimoto presents the subjects of his photographs as truthfully as they will allow. He makes no attempt to disguise how he captures the varying degrees of light that generate the photographic print. In this sense, he is as candid in his approach to his subjects as the minimalists were.

If we were to strip Sugimoto's exquisitely printed photographs to their most elemental components, we would find light, time and space. Indeed, his chosen artistic medium (photography) is one that is itself a product of light, time and space. Again, the correlation to minimalism and even to abstract expressionism with its dedication to rendering a painting for what it is on a most fundamental basis — paint on a flat canvas — seems an appropriate comparison to Sugimoto's photographic images. 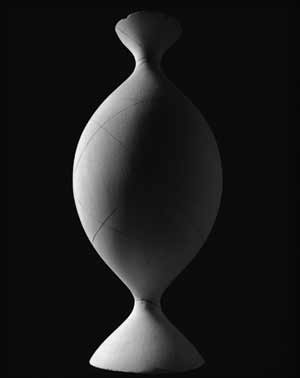 In addition to investigating the world around him (Dioramas, Sea of Buddha, Pinetrees, Movie Theatres), Sugimoto also seems to be asking his viewers to see their surroundings in a new way. This suggested new looking has some connection to Zen Buddhism, which Sugimoto practices. Here Fran's inclusion of D. T. Suzuki's essay "What Is Zen," along with a guest lecture by TCU professor of Eastern religion Dr. Andrew Fort, becomes important. Suzuki's introduction to the elusively complex and abstract theories and practical manifestations of Zen offers another way of approaching Sugimoto's photographs. In discussing how the essence of Zen is grasped, Suzuki writes that "the human tongue is not an adequate organ for expressing the deepest truths of Zen . . . they are to be experienced in the inmost soul in which they become for the first time intelligible." It is natural to view these beautiful, although somewhat ambiguous photographs as a visual manifestation of Zen (particularly the Seascapes, Pinetrees, and perhaps even Sea of Buddha).

Whether or not Zen is part of the artist's intention, his images are open to quite a range of possible interpretations. Fran's unique approach and her ability to make connections not always apparent offers students and art lovers alike a new point of view that opens doors for alternative readings. What I have taken away from her class is a new appreciation for the complexities that arise when two cultures collide. Sugimoto's unique connection to East and West surfaces in his work through themes, subject matter and his method of working. Illuminating numerous issues to be explored and pondered, this exhibition and lecture series at the Modern are a true delight.

Images courtesy The Fort Worth Modern.

Stefanie Ball-Piwetz is a graduate student at TCU in Fort Worth. 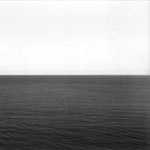