Connie Butler staked a claim for the legacy of feminist art during her recent presentation at ArtPace, maintaining that aspects of the movement continue to influence contemporary art. 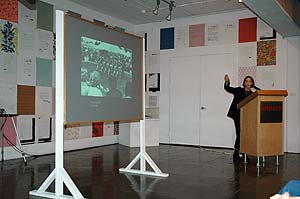 Connie Butler during her presentation at Artpace.

Butler, the Robert Lehman Foundation Chief Curator of Drawings at the Museum of Modern Art, discussed her curatorial project, WACK! Art and the Feminist Revolution. Based on feminist art from 1965-1980, Butler's title gives a nod to the pop art exhibition BLAM! yet the acronym refers to the Women's Action Coalition. This exhibition of 100 female artists will open in March 2007 at the Los Angeles Museum of Contemporary Art.

Butler's comprehensive, well-researched endeavor documents a movement that she characterizes as "the most influential art movement in the post-war era." For example, one female artist did equestrian-themed performances that precede Matthew Barney's large scale costumed spectacles. Provided with the benefit of hindsight, Butler directs her informed gaze to lesser-known feminist artists to suggest how feminist works indirectly paved not only Barney's way but many other artists as well.

INFORMATION IS POWER is one of Butler's categories for the art in WACK! ; what she calls "points of entry" for the work. For those interested in studying the feminist art movement, the resurrection of artists who have mostly escaped the focus of scholarly study will empower the movement's historical position. Butler pointed out that in this way, her curatorial work has "an underlying feminist strategy." Cataloging and writing about such work makes it possible to be part of a discourse, and adds variety to the feminist realm, mostly dominated by the eponymous Cindy Sherman, who appears everywhere on bookshelves. Butler conducted extensive interviews with artists, held meetings with colleagues in order to track down the names of artists active during this era, and even directed interns to investigate unfamiliar or forgotten names on old exhibition invitations.

As Butler spoke, the frustration of grad school research came back to me. Though I studied feminist art, it wasn't easy to grasp that time in art history. Documentation was available for mostly the pivotal women and their actions – Carolee Schneeman's scroll performance; Judy Chicago's Last Supper ; Womanhouse. They became figureheads of an otherwise forgotten and impenetrable landscape. I remember sitting on the floor in the library, leafing through Artforums to find the original Lynda Benglis advertisement in which she sends up the male art world by wearing only sunglasses and a strap-on dildo. The magazine articles of the seventies felt like a time capsule, in which I tried to imagine what is taken for granted now was just breaking ground.

The last question someone from the audience asked Butler was, "After doing this study, where do you see feminist art heading?" Butler replied that a Brooklyn museum is doing a survey of ‘90s and contemporary feminist work, a job she didn't envy because she sees it as a minefield. The post-feminist era hosts many conflicting perspectives. For example, Ariel Levy tags the seemingly enlightened and sexually liberated women in Girls Gone Wild as "female chauvinist pigs."

I could not help but think that we were in a place filled with the feminist contemporary art of the future, but exactly how? Maybe today, work doesn't necessarily need to be labeled as "feminist," because a feminist reading of work is always possible and available, thanks to the groundwork done in the seventies. 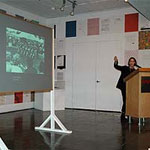