My first trip to Manhattan was at the tail end of the nineteen-eighties. A blizzard menaced me and mocked my Academy Surplus winter-gear as I doggedly toured the frozen remains of the East Village scene. I went to International With Breath-mint, a prominent little-known gallery. Hanging on the walls were irregular rectangles of wood paneling, each with an attached photograph. These artworks commanded exactly the same degree of attention that the back of the cereal box on the breakfast table begins to command, when one is halfway through one’s bowl of Cheerios. 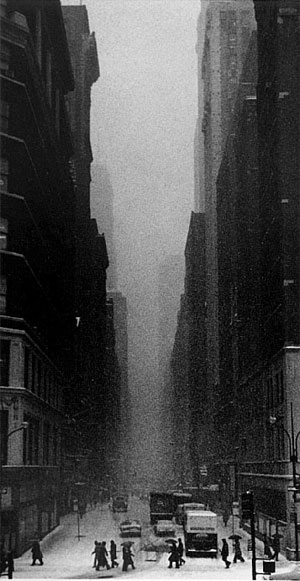 As I faithfully pondered them, another man came in from the whirling snow. He was maybe 45, grizzled and gray, in jeans and a pitifully inadequate denim jacket. He had a flat, wet, disintegrating cardboard box in one hand. He strode to the back end of the gallery, which was hidden by an improvised curtain. He pushed it back. Seated facing us at a table, typing noisily, was an art-waif.

I had heard of art-waifs but I had never seen one. Distant cousins of elves and leprechauns, art-waifs inhabit the mysterious corridors and secret rooms behind the white cubes of the Manhattan art-world’s public spaces. They guard treasures hidden back there, and carefully tend the invisible gray rainbows of actual Manhattan art careers. they’re shy like unicorns, without being so rare, and they’re said to be as churlish and ill-tempered as curators.

This art-waif looked like he was 12 years old. He wore huge black-framed glasses, and a stylish, but over-sized, dress shirt. He didn’t stop typing or even look up as his space was invaded. After a moment he squeaked irritably, What is it?

The grizzled one opened his shabby, snow-dampened cardboard box, pulled out a sheet of slides, thrust them at the art-waif and muttered something like, My work…Lotta years… Interesting development.

So. He was trying to show the art-waif his work. He had cornered a magical art-waif and was hoping the little sprite would grant him a magical wish! This was drama, and I ogled it appreciatively from the corner of my eye, as I pretended to be deeply absorbed by the irk on the gallery wall.

The art-waif didn’t even look up. He said, We’re booked for the next three years.

Grizzly stared at the art-waif and shifted uncomfortably, but he didn’t leave. He kept the paw with the slide sheet fully extended. My work!…he grumbled …Lotta years!…. Interesting development!

Painful moments shuffled by. The blizzard outside whined like a mid-career loser contemplating the success of arguably less talented contemporaries. Finally, the art-waif stopped typing. With a sigh of exasperation so massive it would’ve seemed hammy on the vaudeville stage, he snatched the slide sheet out of Grizzly’s hand. He then performed the slide-viewing exercise I was to see many times in the back-rooms of Manhattan galleries. Head tilted back, he put the sheet between his face and the light bulb that illuminated the place. He then jerked the sheet back and forth, slowly raising it so each row of images passed before one eye. Entomologists have compared this complex action to the mysterious dancing of the bees. It took about three seconds.

Huh, the art-waif said mechanically as the slides slid past his retina. Your work. Lotta years. Interesting development. He thrust the sheet back at Grizzly, without ever looking at him. We’re booked, he said, for the next three years.

The waif resumed typing. Grizzly put his slides back in their damp cardboard sarcophagus. He took a step out into the gallery and put back the art-waif’s privacy curtain. He did not look at me as he passed. He opened the door and went back out into the blizzard of obscurity, head down.

I stood there, processing what I had witnessed. A staunch resolve appeared amidst my swirling thoughts in the slowly settling snow-globe of my mind. I would never do that! There had to be a better, less humiliating way.

Thereafter I became a frequent visitor to Manhattan, as I tried to resuscitate my stillborn provincial art career. I had one friend in the business and I pestered him to help me. He made calls that got me past the art-waif perimeter in the galleries. Ready or not, I found myself being escorted into inner recesses, to shake hands with assorted art dealers.

Meeting these legendary creatures was intimidating, in part because I had little idea how to exploit such opportunities. Sweating attractively, I fumbled through my interview with a Soho sphinx, whose faint smile betrayed an amusement I was far too self-conscious to share. Stomach fluttering, I requested career advice from a chain-smoking sorceress, legendary for turning a whole herd of promising painters into swine. Voice wavering, I attempted casual conversation with a gigantic cyclops who was absent-mindedly gnawing a human tibia. I wondered if it belonged to the last hick to disturb him.

Each time I entered a dealer’s private lair, their cold, probing eyes would narrow as they evaluated my inexplicable presence, and then widen again as they quickly surmised I was a nobody. I had a better chance of being chosen by NASA to fly a mission to Mars than I had of getting my art shown in their galleries, but in deference to my friend, they treated me somewhat politely. They responded to my childlike requests for guidance with candid feedback. New York City is the most provincial art ghetto of them all, the Sphinx informed me. You don’t live here, so nobody here will ever be interested in your art. Your work is derivative, the Cyclops observed. No one wants to see your crap, because we’ve seen crap exactly like it before! The Sorceress looked me up and down, and hissed, you’re too old! Nobody wants an artist as old as you! Their gracious wisdom rained down on me as gently as tiny stinging pellets of buckshot might rain on a chicken-thief’s rapidly receding rear end. I collected lots of such tidbits, the sort of valuable insights I could use to pep up a suicide note.

My friend had instructed me to have each dealer give me the name of, and an introduction to, another dealer, so I would always have someone new to stalk. I was like the video in The Ring. They had to make someone else see me or they themselves would die; in this case, from the boredom of continued interaction with the provincial moron. As months of stalking rolled by, my fear diminished and I started almost relishing the adrenaline buzz I got from each dreadful encounter. The futility of it all was discernible, but I had no other ideas.

The last dealer I stalked was the proprietor of the renowned Dachshund Wormer Gallery. He represented European artists who shared the delusion that their art was sincere, even revolutionary, because it was entirely constructed of materials that might have been purchased at Home Depot. I surveyed some of their cutting-edge piles of particle board, insulation and duct tape as I approached the resident art-waif. She glared at me like an enraged baboon. Hey, I said pleasantly, These are for Dachshund. So-and-so sent me. She looked at my proffered slide-sheet as if it was an illustrated menu of birth defects and snorted scornfully. We don’t do slides, she sneered. He’s expecting them, I countered flatly. She lowered her eyes and audibly growled, How wonderful for him.

Back in those days, art-waifs were always hateful. I used to wonder if they attended some special School of Rudeness, in a hollow tree in Central Park, where they learned secret techniques for curling their upper lips in disgust, or practiced contemptuous eye-rolling. But this waif’s hatred for me was somehow special. In retrospect, I realize she must have been sexually abused as a child by someone who resembled me, perhaps a man who approached in just the same way I casually ambled up to her desk, perhaps a sexual predator who, for some dark unknown reason, had always held a sheet of carefully labeled slides in his hand.

I wasn’t intimidated by her threat displays. I had grown rather blasé about the whole dealer-stalking routine and I certainly had some firm ideas about what was and wasn’t proper behavior for an art-waif. She struck me as preposterous and inappropriate, and I smiled at her and laughed. Something funny? she snarled. You, I said, and your charming manners.

Our further communications, equally decorous, were about my coming back the next day to pick up my stuff. When I did, Dachshund himself was there, all courtesy and concern as he explained why my work didn’t fit in with his program. That was business-as-usual to me, but he took a long, long time with it. He was friendly and way too nice. Maybe he was trying to compensate for his mega-bitch art-waif, but his behavior was just as inappropriate as hers.

I felt insulted. Was I such a pathetic out-of-town wannabe, with my so heart grotesquely displayed on my sleeve, that he had to coddle me? Did he think I might burst into tears because Wormer Gallery rejected me?

Fuck this, I thought. Just give me my fucking slides! I said and grabbed the sheet out of his hands. Spare me the soft landing!