The first time I answered a booty “Call for Artists,” I had to “submit” to some art organization’s intensely sexual desire to “review my materials.” They said that if they accepted my “proposal,” we would spend our honeymoon building a sculpture of my design, to decorate the strip of park between Memorial and Allen Parkway, near the Henry Moore sculpture of the declining Modernist paradigm. They were also going to pay me a dowry of five thousand dollars. 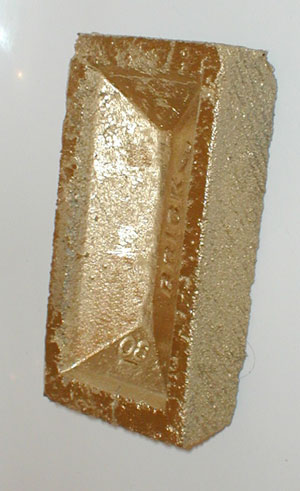 I wasn’t aware of the possibility of “anal rape,” so it sounded like “love” to me. My art practice at that time was to find the invisible threads of social content criss-crossing any given site, and to manifest their existence with some object or image. I studied the site eagerly. I knew those bits of parkway were all about providing the executives who live in the Riviera Bayou subdivision with a lovely commute to and from downtown. That got me to thinking about corporations, and poor people, and fascism, and the ugliness hidden behind pretty exteriors; all the usual things that crowd a young mind intoxicated by the joy of creativity.

I decided to go subtle. I designed a metal-frame and chicken-wire pen, twenty foot square, with barbed wire around the top. It was to be almost hidden behind a stand of crepe myrtles. Inside the pen, all the lush park grass would be stripped away, leaving bare earth, and that was to be littered with trash like old newspapers, plastic bags and fast food packaging. Then I wanted to cram about two hundred naked mannequins of all sizes into the enclosure.

I wanted drivers to catch a glimpse of a cage full of suffering humanity as they flew down Allen Parkway. Then, as they drove a little further, another tableaux would come into view. A full-size working gallows was to be erected and another mannequin, this one clothed in business attire, would be swinging from the noose. There would be a hood over the head, and a sign that said TARDY hanging around the neck. A nearby billboard, at least 30 feet long and 20 feet high, would instruct drivers, don’t BE LATE FOR WORK.

That was my proposal and I felt like it was a winner.

Dear Applicant — We are grateful for your application. Unfortunately, you are a non-winner. There were so many wonderful applicants that the judges underwent intense suffering, comparable to that of Jesus Christ in the garden of Gethsemane, before they were able to reach a decision. Please respect their pain, and that of your fellow losers, by going away quietly. Thank you.

Rejection! I was shocked and I didn’t understand.

I submitted another proposal to another non-prof. I had an idea for filling their gallery. Let’s divide the room into two halves, I suggested, and install a wall of metal bars, like in a jail, down the middle. We”ll make each half a mirror image of the other. On one side, we’ll put the art-people who come to see the show. On the other, we’ll put the scariest social lepers we can find. Junkies, prostitutes, homeless families, musicians — the scum of the earth.

It was to be called Social Symmetry. I only needed fifteen hundred dollars to make the magic happen.

Dear Applicant — Thank you for your proposal. It is with a genuine sense of the tragic dimension of life that we humbly undertake our sad duty of informing you that you were not selected. The profusion of talent in the proposals we received, comparable to the massive cloud of pollen generated by a field of ragweed, made the task of our selection committee as difficult as actually defecating a gold brick. Out of respect for the magnitude of their ordeal, please do not vandalize our building when you pick up your materials.

Rejection! I was confused. Could the problem be that my proposals were a bit too antagonistic, a trifle too anti-social? I knew my work would freak people out. Wasn’t that what the art world wanted?

All my artist idols had been renegades and transgressors, and the history of modernism, as I understood it, was a story of rule-breakers who ended up being heroes. I was hateful and I made hateful art, so I thought I should fit right in. The Dadaist Tzara had said, “There is a great negative work of destruction to be done,” and, as of the nineteen-eighties, I didn’t think the chore had been satisfactorily completed. I aspired to drag the whole art enterprise away from the footnote-to-modernism micro-ambition of featherweights like Robert Ryman and Sherrie Levine, back to something more substantial, ideally something involving huge rioting crowds, skylines in flames, city streets flowing with both human and animal blood, and the amputated heads of countless executives being used as decorative ornaments, or perhaps soccer balls.

I naively expected that the art world would cherish my efforts along those lines. Frankly, I anticipated being welcomed as a god. I assumed that someone like me, a sick weirdo corrosively hostile to the social order, would automatically find himself swimming in a sea of cash and honors. I thought the big problem of my career would be maintaining an adversarial pose as wave after wave of success crashed over me.

Alas, it turned out that the art world’s appetite for destruction was markedly less robust than my own. I’m a little slow about these things, but eventually I got it. Even though I was artfully expressing myself by living like a wild, snarling beast on the edges of decent society, gnawing away at normal values and dry-humping everything sacred, the art world was not going to welcome me with a lavish parade. They weren”t even going to give me a NACHO grant.

After that, I became morbidly obsessed with non-profit art organizations, and I decided that their existence was an important aesthetic problem. I started calling them parasitic art bureaucracies and making art that attacked them. In short, I began exhibiting the psychotic ideation already quite familiar to regular readers of this column.

Hello. My name is Clark. In my private world of shadow and delusion, no rejection by the art world can ever hurt me again. Now, when my work is ignored, attacked or dismissed, I take it as evidence of my genius and my fantastic success. I’m Cézanne, being rejected year after year by the Salon. I’m Pissarro and the Prussian troops are using my canvases to make trails through the mud. I’m Warhol, watching workmen at the 1964 World’s Fair paint over my mural of WANTED posters. I’m Max Ernst and Hitler just doesn’t get my stuff.

Color me paranoid, but I even suspect that the American academy of the 21st century may be every bit as arrogant, self-serving, repressive, and blind as the French academy of the 19th century. The art it joylessly celebrates looks like a tidal wave of pointless crap to me. The crap wave! Are you riding it? The foam is made out of the explanatory labels!

I’m way out on my limb, alone and demented, but the view from up here is astonishing. I can see a vast herd of wannabes spreading out for miles. they’re franticly crowding around all the crooked gambling tables from which the art world pretends to dispense success.

The scene is so overpopulated, it’s like something out of Soylent Green. My isolation starts to feel pretty damn good when I’m looking at something like that.

I love it all, but I had no idea that Soylent Green was primarily population premised.