And/Or Gallery is on an unbroken run of good shows this year, with since their opening in January having been, at the very least, interesting. Other spaces may be sharper looking, and smell less like cat, but none can claim to be more consistent in showing work that’s breaking new ground, or that seemingly could care less about playing it safe. 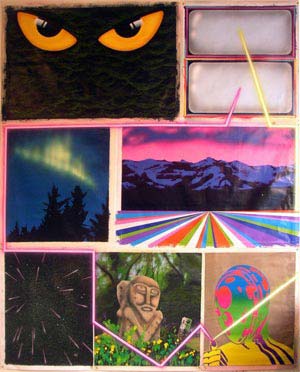 At a recent evening of artist’s talks there, (which included Michael Bell Smith and Dirk Paesmans of JODI,) there was a palpable excitement to be witnessing vital work by artists who were actually on some sort of forefront.

Co-owner Paul Slocum, with typical modesty, expressed some insecurity to me the other day about not having an MFA, with the “art education” it’s supposed to provide. I thought, you have got to be kidding me. The grad school thing is fine, necessary for some, if overrated; but in the last year Slocum and gallery co-founder and Treewave collaborator Lauren Gray have been flown all over the world to participate in exhibitions and music festivals, including an event at Deitch Projects in NYC, that locus of the new and happening. Slocum’s work has been selected for every significant group show in North Texas in the last year (including I-35 at Dunn & Brown, Moving Pictures at The Dallas Contemporary and Road Agent’s Ambush series), and elsewhere. I’d wager that’s an art education many grad students would sell their kidney for. And then there’s the gallery.

Installation shot of the gallery.

Slocum and Gray opened And/Or with a punchy Tom Moody show and have since scored Cory Arcangel and Paper Rad, discovered cool work by young unknown Wendy Red Star and are providing a venue for guest curators to explore their interests framed by the gallery’s promising context. they’re also pioneering the revitalization of yet another Dallas neighborhood, which, coinciding with their arrival, is transforming from rundown to a destination for art and hip commerce (plus, Bangkok City next door is the most reliable Thai food in town, Vietnam, across the street, is good too and cheap.)

The current show features work by a pair of digital-age translators of geeky-to-cool, yesterday-of-tomorrow images in both new and more conventional media. This may be some of San Franciscan Nick Ackerman’s best work to date. He shows with Lizabeth Oliveira in LA and in the past he’s suffered from the same cute Day-Glo urban superficialty that her gallery seems to specialize in. Ackerman’s ambitious paintings here are the best in town right now. In a way that many are attempting and few accomplish, they demonstrate ways to transmute the banality and rapidity of TV/video game sensibility into paint on canvas. He’s finding ways to approximate the language of the small glowing screen while remaining true to the integrity of the painting as object, as a concrete thing in space, with all its loaded history.

The paintings are large canvases, unstretched and grommeted around their perimeters. Combined with the trippy, spaced-out imagery, neon colors and slick, airbrush-y areas of smooth modulation, they read like worked-over drop cloths from a 70’s bike-and-van chop shop. One features reverberating series of wobbly fluorescent green circles echoing through deep space. Slocum told me Ackerman was into stuff like new physics, and I immediately recognized those noodly loops as relating to some animated ‘super strings” from a Nova episode I’d just rewatched. 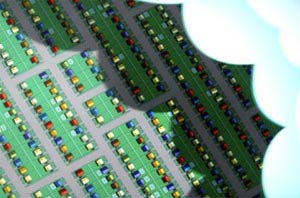 Like many of us, Ackerman seems to have been weaned on a diet of comic books and graphic novels, and he divides the larger works up into small panels of various sizes, introducing not only an element of graphic narration, but also an effective formal device to break up the picture plane into digestible chunks. These are then tied back together with astute formal placements and, more literally, with bands and stripes running throughout the overall design. The smaller paintings and collages are arranged on the wall in a similar fashion, even though they, and many of the individual panels, could work well standing alone. This fragmentation/bricolage becomes yet another way to literally “deconstruct” a wall-sized canvas to more accurately mimic the actual visual function of our more antiheroic postmodern sensibilities. This doesn’t feel reactionary, as such a critique would have implied a few years ago, nor does his truly whacked imagery seem to come out of any self-conscious reach for cool. Both the pictures and their formal presentation appear as an authentic, rigorous attempt to come to terms with an aesthetic as informed by Atari, Dr. Who, fuzzy blacklight Rush posters and early Macs as it is by any classes in “Art Since 1945.” 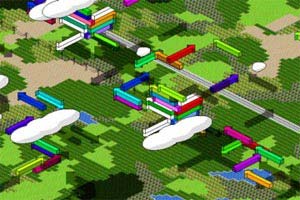 Michael Bell Smith is part of a burgeoning scene of artists who are finally using computers in visually intelligent ways. “Hacking” is the buzzword in this latest wave, and not unrelated to musicians of the last 20 years, artists are acting like stylistic coyotes, trickster scavengers of the programming wasteland. Much of art history since Picasso first glued some fringe to a construction of found wood is shaped by an approach like a beach-combing treasure hunter’s – junk being alchemized into gold. If born today, Kurt Schwitters, might not so much fill his home with Merz, as be likely to ferret out the holes in video game program and pull them inside-out, (as do JODI.) Or maybe Richard Hamilton, instead of creating that legendary dystopic magazine mash-up of suburban angst, might, like Smith, have taken the series of 12 R.Kelly “Trapped in the Closet” videos and layer them up simultaneously in a visual, auditory fugue. On a couple of visits to the gallery, I sat and watched the whole five-minute piece through six times or more, mesmerized. As the images build, they disintegrate into cascades of shimmering light, the consistent cinematography and lense-effects of the originals resulting in unified abstract streams of subtle pinks, violets and oranges, occasionally punctuated by a recognizable street scene, berating grandmother or gesticulating dwarf. The sound dramatically builds to an inevitable crescendo before dropping off suddenly into one final, plaintive Kelly vibrato squeal. It feels as if nothing at all was lost from the originals, and some sort of transcendence may actually have been lent to their fundamental grotesquery.

Other pieces include a video projection of a looped anime explosion, going off continuously, looking like a pure light, textless Lichtenstein. Two flat screen monitors employ state-of-the-art direct computer feeds, which apparently provide a much sharper image than even the best DVD can approximate. In one, dozens of beautiful, outmoded video game backgrounds have been lifted, scrolling down the screen in hypnotic succession. In another, you gaze down past clouds at a dense isometric suburbia , its endless rows of identical houses peacefully flowing past right to left in sterile grandeur. Are you supposed to reach for the joy-stick and start dropping some bombs? Is it a dream or astral traveling? Maybe you’ve at last cast off your virtual mortal coil. Or could it be you’re just landing at DFW?

Titus O”Brien is an artist and writer currently living in Dallas. 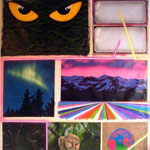