Courbet: Birth of the Modern Landscape

If there was ever a show you need to see in person, it's Courbet: Birth of the Modern Landscape at the Museum of Fine Arts, Houston. Gustave Courbet's landscapes and seascapes are more about paint than about picture making. Heaping and slathering oils onto canvas to form rocks and surf, Courbet had a knack for making the random textures of messy paint convey the very different, but equally alive textures of the real world. 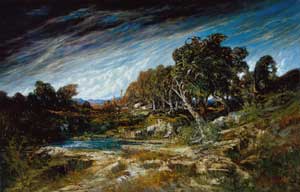 The first question with Courbet is, “How did he do that?” To satisfy this curiosity, the MFAH has provided a video, hung like a painting, in which a contemporary artist demonstrates some of Courbet's showier techniques. Having the video in the gallery is odd, but okay: it's a bit more obtrusive than wall text, but infinitely more informative, and it tells you exactly what you want to know. The smallish snow pictures hung nearby hold their own against it.

Courbet was playing for high stakes, seeing how far he could push credulity, how much paint he could load on before the viewer stops believing. The best painting in the show is, predictably, the one where he pushed hardest: Grotto of Sarrazine near Nans-sous-Sainte-Anne, featured on the cover of the catalogue. It's basically a panel of smeared, stretched, pulled and blotted paint, the equivalent of a greasy plate ready for the dishwasher; the marvel is that it's also a thoroughly legible picture of a shallow cave, as innocent as you please. 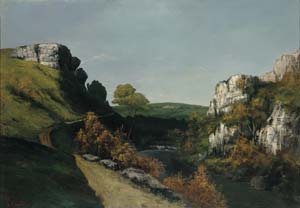 That's why Courbet's work turns contemporary viewers on: like the old face/vase illusion, Grotto of Sarrazine flip-flops from howling painterly abstraction to charming rural landscape, overlaying and comparing two genres of painting that usually have completely different audiences and ideologies, and showing them to be one and the same. Every painter knows that, but Courbet rubs your nose in it. After you have seen a Courbet, paintings by other artists in the adjoining halls of the MFAH become a parade of painterly gimmicks: fluffy trees are made from repetitive green dabs, shimmering silks resolve into cleverly placed fuzzy lines, and sparkling lace turns into white dots. No wonder he was controversial — making one thing look like another was always painting's favorite game, but under normal circumstances you only notice the artifice when it doesn't work.

Courbet's landscapes, however, are free from all the social baggage attached to his paintings of people. The show reveals Courbet's paintings as a mix of radical gestures overlaying a deep-rooted romanticism. The antidote to society, according to Courbet, was Nature with a capital N — a breathing, breeding mystery that Courbet, like Jackson Pollock, realized could not be merely depicted, but must be reenacted on the canvas to have any animistic force. 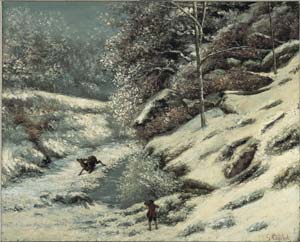 It's a tall order, and Courbet's painterly pyrotechnics didn't always work. (He was better at rocks and water than foliage.) When art historians talk about Courbet, they always mention Pollock, but there's another name, scarcely whispered, that comes to mind first: Bob Ross. In the same way that elegant, reductive modern architecture legitimized banal, cost-effective boxes, Ross (TV's ubiquitous, dandelion-headed painter of happy little clouds) is Courbet's direct artistic heir. When Courbet fails, he's Ross; in Stream in the Forest, dabs of green paint devolve into a merely clever shorthand for tree branches, no better or worse than the trees in the backgrounds of most traditional paintings, but then those paintings were not primarily about trees.

Courbet's empty caves; boatless, waveless seascapes; and dark conglomerations of rocks, branches and water are remarkable for what they leave out as much as what they pile on. Nobody's home in his paintings. For all of his fantastically sensuous paint and beast-man posturing, Courbet was tentative when it came to figures. Often there's a tiny deer or a little boat only because romantic landscape demands it. Courbet added these conventional elements as grudging afterthoughts, hence their wildly incongruous style. His deer look dazed, as if they were cut from the pages of Field and Stream and pasted into a surreal blizzard of paint intended to mimic their natural environment.

Courbet stands at the fork where the high road of abstraction trodden by Paul Cézanne, Jackson Pollock and Gerhard Richter split from the meandering byway of fantasy explored by Albert Pinkham Ryder and later expressionists. Courbet was doing nothing less than wrenching romantic painting free from romantic subjects, making ordinary objects the vehicle for extraordinary sensation, just like real life.

Bill Davenport is an artist and writer living in Houston. He was one of the first contributors to Glasstire. 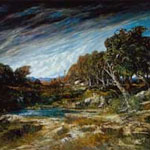