The Art of Richard Tuttle

We seem to be at a peculiar moment in the history of art, unprecedented and confusing in many ways. (Other turn-of-century periods proved similarly chaotic, but the dawn of cloning, AI and nanotechnology makes this time singularly daunting.) The new century has yet to adequately declare anything close to a dominant paradigm, and it seems as if most of us would prefer to just carry on without one. Call it the hangover of modernism – one long bout of boozing and manifestoes, topped off with a stiff belt of postmodernism, that no one would argue didn’t leave one bitter aftertaste. 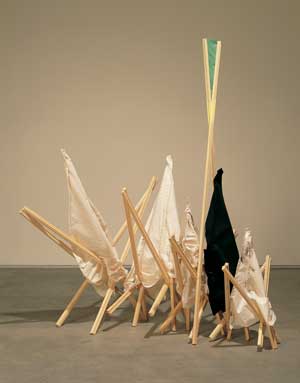 But after a long hazy morning, we’ve stuck our head under the faucet and are facing a brand new day. And, boy, there sure is a lot of shit to clean up in the backyard.

The lumbering, squalling imperialistic monster called Modernism has wandered far enough toward the western horizon that we can at last begin to perceive his modes of operation a little more clearly, and not a few of them are pretty embarrassing. I find myself imagining an ungainly, 500-foot steam-powered behemoth designed by Tatlin and Marinetti, horribly dancing some jerky choreography by Martha Graham in concert with the dadaist poetry of Hugo Ball, all while spewing ejaculatory paint across the world while loudspeakers blast leftist slogans about the destruction of the bourgeoisie. As the alternate vision, conjure a cross-dressing, mustachioed, silently indifferent Duchampian anti-machine – no less annoying. If the 20th century’s symptoms included three world wars (two hot, one deadly cold), a Molochian corporate class war and the perfection of mass media manipulation, the medicine of a self-important but increasingly febrile and impotent artistic response now just seems pathetic.

But if all the declarations about flooding/burning the museums and all the claims of how art would revolutionize the shape of the world have come to seem supremely specious, we’ve come out at the other end oddly nostalgic for such hopefulness, if hesitant to shout too many more slogans. Dwell may not be readily recognized as a backward-facing fantasy magazine, but it slickly propels forward the quaint notion of a neat, prefabricated, mod future where, sitting on our Eames chairs, we can all have a glass cube view (from our winter house in Shanghai) of what are sure to be hydrogen-powered blobular hovercraft zipping by our doors any minute.

Target (logo indebted to Jasper Johns, or Kenneth Noland?) has won over all but the hardcore country Wal-Mart stalwarts with its Ikea-inspired, prefab, Corbusian cubed everything. From furniture to appliances to your dish soap bottle, the lessons of the Bauhaus have at last, quite strangely, triumphed, and all can be yours no matter your income level (thanks to leveled Indonesian forests and cheap Chinese labor). The jury’s still out on how helpful Bauhaus design will be in confronting overpopulation, global warming, government surveillance and mass species extinction, but at least we’ll go down with sharp-looking affordable cabinets. 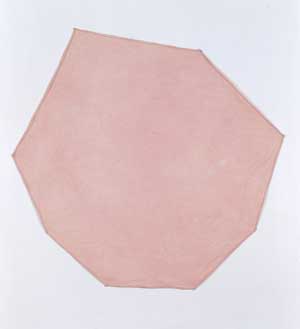 But I digress. How does this rant relate to Richard Tuttle’s little folded foil gum wrappers and noodly-doodles? What got me started is that right now Tuttle seems supremely backward and timely – a paradox he shares with a lot of other great artists, come to think of it. The timeliness relates to the movement from the point 40 years ago where he began to how his retrospective at the DMA looks right now. And, damn, if it doesn’t look quite good.

You can’t imagine a young artist today speaking about the simply "transplendent" reaction he provoked at an Upper Eastside party, which was unveiling a piece of his, by moving a tiny painting two hairs-breadth to the left. But years ago I heard Tuttle breathlessly relate this very tale, and many more like it, in what I’m convinced was the most excruciating artist talk of all time. He"d brought in three full carousels of slides, started with the first thing he’d ever made, and after two hours had got through about nine slides when he started going backwards to reiterate already belabored points. That was it for me. I thought, this has to be the most pretentious man in the world, and walked out. But after a few years of regularly traipsing to galleries in New York in the late ’80s and early ’90s, I could count on one hand the shows I actually went back to see twice. More than one of them were his.

The strident tone taken by the modern European avant-garde, from Paul Gauguin right through to Daniel Buren, brought us a parade of -isms to end all -isms. This viral tendency quickly jumped the pond after the war, transforming itself stateside into the no less obnoxious puritanical strains of ab ex, minimalism and, in a Catholic/Luciferian reversal, pop. Each was to be the art that ended art history.

Tuttle began showing in the mid-sixties, at the tail end of this dialectical maelstrom. From the beginning, with his cast-iron Letters (1966), made at the astonishing age of just 22, he was already in search of a Platonic, hermetic alphabet, an alchemical language that would make tangible the secret, inner, exalted nature of each element in this degraded material sphere. He did this not by stripping his aesthetic criteria down to Apollonian cold gray boxes and Fibonacci-derived sequencing, or by allowing the I Ching to make his decisions for him. Instead he would learn to exquisitely feel, and then make visible to an audience, the minute, discrete pleasures of a half-inch blob of yellow paint on a scrap of paper, or a red ballpoint pen scribble, or a two-foot wedge of plywood leaning against a wall.

Where Michael Heizer would go attack some defenseless mountain in Nevada and cut it in half in some fit of earthwork machismo, Tuttle would just take a three-inch piece of found rope and nail it to a wall at a specific kneecap height and let it declaratively (if very, very quietly) stand there alone, infusing the room with "presence." It was, of course, absurd to assert that such an act was going to stop the war in Vietnam or end the struggle for hip supremacy between forces represented by the Velvet Underground and the Grateful Dead. Unlike many of his contemporaries (Robert Smithson closed his show at the Whitney in protest until the bombing stopped in Cambodia, which – surprise! – it didn’t), Tuttle didn’t make such claims.

Hence, part of his prescience today. As seen in a number of Whitney Biennials, reiterated by millions of artworks at art fairs and bludgeoningly apparent at surveys like P.S. 1’s bloated Greater New York, we are in the age of the modestly insecure gesture. Talent today is critically gauged by the cleverness of the appropriation – of techniques as much as of content. This may have been true 20 years ago as well, but the scale is so much smaller today and the ambition relatively absent (except for maybe the aspiration to savvy market success). Art isn’t pretending anymore to change the world.

And this is part of the timely instruction Tuttle can provide. His means were always the most modest, but his artistic ambitions were gargantuan by comparison. His dedication to the power of the art object and its presentation, his belief in the possibility of expressing the ineffable (or even the existence of such a thing), and his rigor and courage in asserting the power of even the most pathetic of forms have almost no analogue today. It’s as if, along with political/social ambitions, young artists have abandoned the artistic ones as well. 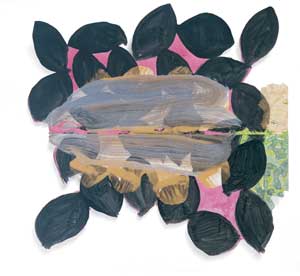 
Art now falls into a few predictable camps. The mild, internal, whisperingly insecure (read "earnest") sewn/scribbled art on one hand, and on the other, a brash but cynical youth-culture-worshipping manifestation that is careful to never be so well made as to be mistaken as sincere. Juggle the modes at will. You know what I’m talking about: twigs, birds, faint little fey marks and mushrooms mushrooms mushrooms, fighting it out with BMX bikes, fake Nirvana videos, stacks of records, shag carpeting and skulls skulls skulls.

Which is all fine; the kids are doing their thing. We’re in a new age (not the New Age, with all that theosophical baggage), with generations coming up who"ve spent more hours in basements playing video games than outside doing anything (be it farming, baseball or even, heaven forbid, drawing from life). It’s also a generation coming out of academic art programs, hundreds of thousands of them annually who never learned how to actually draw or paint or make things but were instead taught only to prize the clever gesture over any intimacy or mastery of process.

Some are responding to this free-for-all by getting uber-crafty, spending hundreds of hours at the sewing machine or working with glue and toothpicks. Others are the obverse, as if they can’t dare to be bothered and we should prize them for their innate genius, gumption or, worse, cool. In any case, Tuttle looks instructive now because of his demonstration of total commitment, devoid of cynicism. Doubt is rampant – it’s the substratum of his endeavor – but not cynicism. This faith in the authentic power of art has led him to create formal artistic solutions to specific questions that can only arise from the committed act of looking/feeling/making and allowing this process to completely consume your life. Tuttle’s friend and mentor Agnes Martin believed in the romantic/transcendental axiom that if you’re "called" to be an artist, you can’t help it. You must simply do it. And if you’re going to do it, Tuttle provides not only an example of the level of intensity one should aspire to, but many astute formal lessons in the manufacture of effective aesthetic/philosophical operations.

Sometimes he’s well over the border into the ridiculous, but if he weren"t, there would be none of the precious, idiot savant bravado that makes his exhibitions so compelling. It becomes obvious that his point is not whether you, the viewer, like this little doodle or that one, but that he felt the necessity to make them and that they all add up to one much larger program, spread out over and consuming an entire human lifetime.

There are certainly bad artists who spend decades producing inconsequential crap. Tuttle is not among them. The lifetime of work on display here demonstrates a sophisticated digestion of, and response to, not only the artistic currents that were cascading down from Picasso, Matisse, Duchamp, Malevich, Pollock and Warhol, but an evident internal, personal, emotional processing. His works from the "80s are often almost elegiac, or violently mournful, as if responding to AIDS or the Reagan era itself. Nor are they untouched by the neo-expressionistic atmosphere of the time. The later works return to some of the peaceful quietude of his earliest work, maybe inspired by his move to New Mexico in 1988 (he continues to split his time between there and New York). You can read his work on many levels simultaneously, which is part of its success and another mark of its durable importance.

There are signs of cultural renewal all over the place, and a lot of work is appearing that points in promising directions, including some more necessarily overt politicization. We don’t have our Picasso or Cubism yet, and the hope is that such a centralized force has been made impossible. But we also are awash in art of the most negligible, cynical, disposable variety. We, as much as those in any age, will demand some clear expression of our zeitgeist, and for my money it’s not descending from Matthew Barney (about whom I’m hardly alone in having very mixed feelings, though I do admire his, uh, balls) or Damien Hirst. In this climate, Tuttle looks sharp. Here’s hoping the art students get out to see his work. Not that we need more crumpled, tempera-painted cardboard doodads (we sure have seen a lot of fluorescent light bulbs since Dan Flavin’s retrospective last year). But we could use some more of Tuttle’s rigor and studied exuberance. 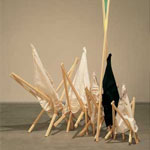